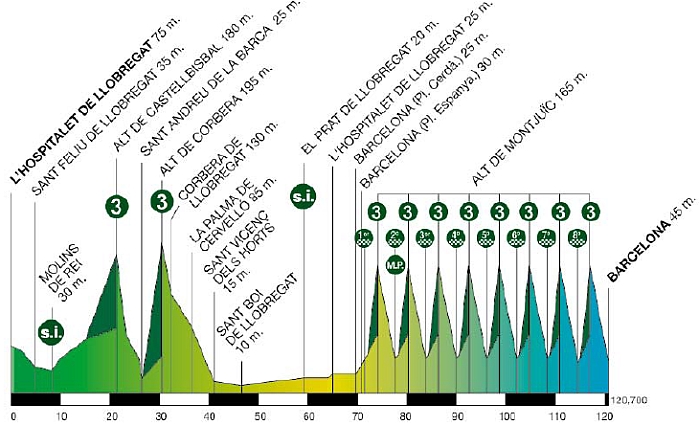 The final stage and a decisive one too. Yes this features laps of an urban finish in a large city but it’s hilly, twisty and the time bonuses can still decide the race.

Stage 6 Wrap: a solo win for Belkin’s Stef Clement after he jumped away from his breakaway companions with two kilometres to go. A fine win for a rider with a big engine but few wins.

Stage 7 Preview: first a loop to the countryside and then the race is all about the eight laps of the Montjuic circuit with its steep climb and twisting descent. After ski station summit finishes this is nothing in comparison but eight laps of 125m of vertical gain = 1,000m. It’s more like a structured session for the Ardennes classics with the 2km climb that reaches 8% and averages 5.8%. As such it’s perfect for Joaquim Rodriguez who might find offence the best form of defence as he seeks to contain Alberto Contador, just four seconds behind on GC but in a winning position if he can win the stage. Here’s the GC:

As the table shows it’s advantage Contador. However the probability of this 1-2 is low: others want the stage win, in a straight sprint you’d back Rodriguez and even if they did finish 1-2 there could well be a time gap too. But there are others in range two, Ag2r La Mondiale’s Romain Bardet is an outsider assuming his hands have defrosted, he seems the punchiest among Tejay van Garderen, Nairo Quintana and Andrew Talansky.

As for Chris Froome, if he doesn’t up his overall position this will be his “worst” GC performance since the 2012 Tour de Romandie when he finished 123rd overall riding (and crashing) in the service of Bradley Wiggins. Of course this is more testimony to his selective race programme and consistency than the wheels coming off this week.

Weather: cold, wet and windy. Nothing apocalyptic with 15ºC but even a few rain showers make the Montjuic circuit much harder. If the conditions are dangerous the race has said it might shorten the final stage, previous visits here in the rain have seen riders use terms like “skating rink”.

Daily Diaz on culture: Besides the economic factor, Catalan nationalism can be explained by the cultural element. With an own language (Catalan, a Romance language the same way as Spanish, Portuguese, French or Italian) and deeplyrooted traditions, many Catalans feel different from the rest of Spanish people. For example, some years ago bullfighting was forbid, but other traditions involving bulls have been maintained.