If there was ever a bike race with the wrong name it’s the Tour de Langkawi. Langkawi is an archipelago off the coast of Malaysia and the bike race normally visits its largest island for one stage before touring the Malaysian mainland for the next 10 days. Think of a Tour of Corsica that spends most of its timing riding around mainland France.

The race is usually decided by finish to the Genting Highlands, a name that’s famous with cyclists as a summit finish, but for everyone else its an Asian mix of Disneyland, Alpe d’Huez and tropical humidity.

The Route
There are several ways to the top but this is the classic route starting from Gombak, 15km north of Malaysia’s capital Kuala Lumpur and to the east of Selayang. Federal Route 68 heads north-east. At Genting Sempah the road to the Genting Highlands is on the left but you must ride on before doubling back and then follow the signs the for Genting Highlands with the road heading north. Continue until the large Goh Tong Jaya roundabout and follow more signs for Genting Highlands. Some reports say the gradient reaches 25% but that’s only on the inside of some tight bends, otherwise it is a tough 10% but not insurmountable.

The Feel
Some climbs are hard because of their gradient but there was an effort involved before riding just to work out the best route. You don’t need to be a mountain guide to find the Galibier but Genting offers a variety of routes. Even selecting the classic Tour de Langkawai approach leaves choices because there’s a tarmac palimpsest of overlapping roads, an elevated expressway and a winding road below. Avoid the Karak Highway, an express route.

Once the route is picked and the directions memorised the start is easy. It’s a scenic old rode from British colonial times and the traffic still drives on the left. In order to travel and exploit resources, the Brits built a network of roads and you begin on the old road with with most of the traffic siphoned away by the newer Karak Express which snakes over the road at times. You can hear and smell the traffic rumbling overhead on its engineered road while you take a simpler way up.

It’s quiet. The tidy verges have kids dressed in European soccer shirts playing on rusty MTBs, presumably corroded by the steamy hot weather. Monkeys scavenge along the road, is it wrong to gift them a chunk of food from your pocket? Then again there are so many banana trees growing wild you needn’t bother. The vegetation is lush and dense. The gradient is relaxed, 3-4% for a lot of the way here.

After Genting Sempah – where the profile above starts – the road changes. Gone is the winding road, goodbye colonial legacy and hello 21st century Malaysia. You navigate huge junctions and select the multi-lane highway with a 10% gradient that’s loaded with traffic. The air is full of fumes from trucks and comfy aircon coaches labelled Bas Ekspres ferry tourists uphill. There’s not much room for the cyclist, a coach going uphill has to pass you and stick out into the second lane and if the drivers are courteous there’s just not much room on the road. There’s a downhill section soon after.

After the large Goh Tong Jaya roundabout you turn right for the final part of the climb and to the Genting Highlands proper, passing a checkpoint with a colonial vibe thanks to its wooden timber frame. Still almost 10km to go and a steady 10-12% gradient that’s hard going but worse, you’re buzzed by traffic. A lower gear, a lighter bike? No, I wanted narrower handlebars here as the passing traffic was making my shoulders involuntarily hunched together as if to leave more room for passing vehicles. There’s room for the cyclist at times with a small side lane but be prepared to share this with other two-wheelers from wheezing scooters to whizzing superbikes and it often gets too narrow to use. There are some steep hairpins here but they’re wide – Gulliver does Alpe d’Huez – but the traffic can pin you into the inside, forcing you to take the steepest line meaning an awkward 20% or more. 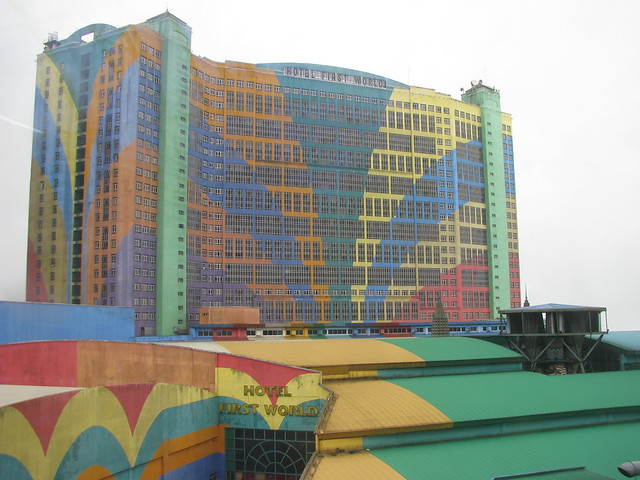 Sunshine on a cloudy day (Photo via Flickr’s Andersondotcom)

Arriving at the Genting Highlands is confusing and dazing and the psychedelic Hotel First World dominates. Once the world’s largest hotel, it is the place to head towards but here it gets a bit like Alpe d’Huez as once you’ve done the climb proper navigating your way through the resort to any “finish line” is anti-climatic. There’s now a wide choice of roads to take. Also just as the Alpe has ski lifts, the Genting Highlands can be accessed by a cable car and there are rail upon rail of rollercoaster rides around.

Overall it’s a hard climb that’s steep and long, comparable to a pass in the Alps by the metrics. But this is more Lautaret than Alpe d’Huez, a superhighway rather than a remote pass. This isn’t the most pleasurable of rides, the start is great but there’s heavy traffic higher up. Sartre wrote “l’enfer, c’est les autres“, that hell is other people. You don’t want to knock everyone else heading up the hill to enjoy themselves and in riding yourself you add to the traffic, but this is a crowded place that can’t be ridden every day nor at anytime. 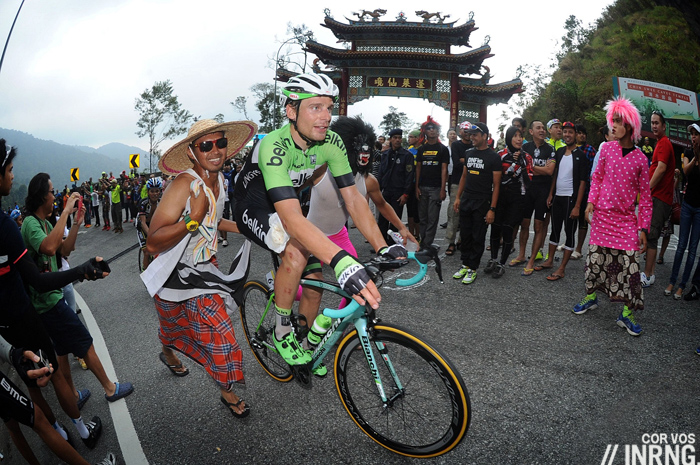 The History
The Tour de Langkawi has run for 19 years now and with 2014 race it has climbed up to Genting Highlands 18 times. Compare that to just 13 visits to Langkawi and perhaps the Tour de Genting is a more fitting name?

Local climb
Cycling’s far from the national sport in Malaysia but I saw a good number of people out for a ride and the capital city of Kuala Lumpur, “KL” to the locals, had posters up for an urban cycling event in downtown KL as the government wants to get more people riding to counter pollution and traffic snarls.

The over-development at the top is remarkable but the climb itself is more scenic and the beauty of this climb is its proximity to KL. I can’t think of another national capital so close to a big climb like this; at least with links to a pro race. The Vuelta uses mountains not far from Madrid and inland from Rome are some great roads of the Giro but none begin from the city suburbs. This means KL offers a substantial climb within a short ride.

The theme-park aspect means it is a tourist destination but there are other things to do in the area. Alternatively head for the Cameron Highlands further north which offer more climbing, a greater variety of roads and less traffic overall.

Road You Can’t Ride?
There’s been a recent grizzly bus crash and one article says a safety review by the police means cyclists can no longer ride here. I’ve only read one report so don’t know if this is confirmed and an email to the resort has yet to get a reply.