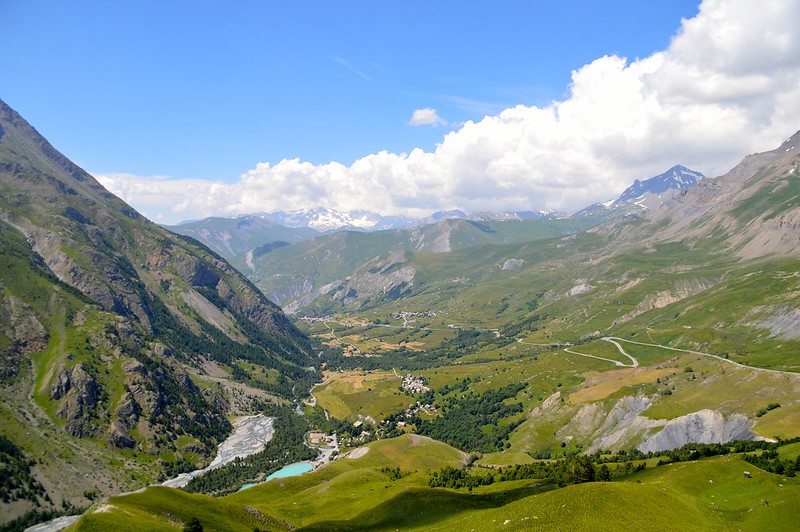 As part of a series to explore the famous roads of cycling, here is the Col du Lautaret in the French Alps. The idea with this series is to discover the road and its place in the world, whether in cycling’s folklore or to explore what it is like on a normal day without a race.

The 2014 Tour de France route was unveiled and Stage 14 looks to like the Queen Stage, it’s certainly got alpine aristocracy with the climbs of the Lautaret before the Izoard and the final climb to Risoul. The Lautaret is a long climb by itself but also one of two ways to reach the start of the mighty Col du Galibier. It’s a climb that’s perfect for the Tour de France but unpleasant for others. A road not to ride?

The D1091 runs east-west between Le Bourg d’Oisans and Briançon. Click on the map above to enlarge it but note the red artery passing through the white terrain of the high mountains.

This piece will cover the western side, the direction to be taken by the Tour but both sides are similar. It’s 34km long at an average of 3.8% but the low rate is not to be dismissed, there are two small descents and the distance takes its toll as the road rises to 2058 metres above sea level.

The climb is steepest at the start the road gains height above the Romanche river, some wide hairpins and two tunnels along a cliff-hugging road that arrives at the vast dam of the Barrage du Chambon which is used as a bridge by the road to cross to the north side of the valley. At this point there are turnings on the right for the Les Deux Alpes climb on the right and soon after the Col de Sarenne on the left, both famous from the Tour. The the roads tracks the white waters of the Romanche upstream, climbing higher to pass through the ski town of La Grave and on towards the summit… which is where mighty Col du Galibier begins.

The Feel
After a flat approach the road rises so suddenly you can draw a line to mark the exact start of the climb. You change gear with both hands. The scenery is great as the road winds up the narrow valley but on a hot day the rocks radiate heat back at you. You can see the hydroelectric dams below and how the narrow valley lends itself to these buildings. Often the reservoirs are blue, a result of oxygenation and minerals in the water. 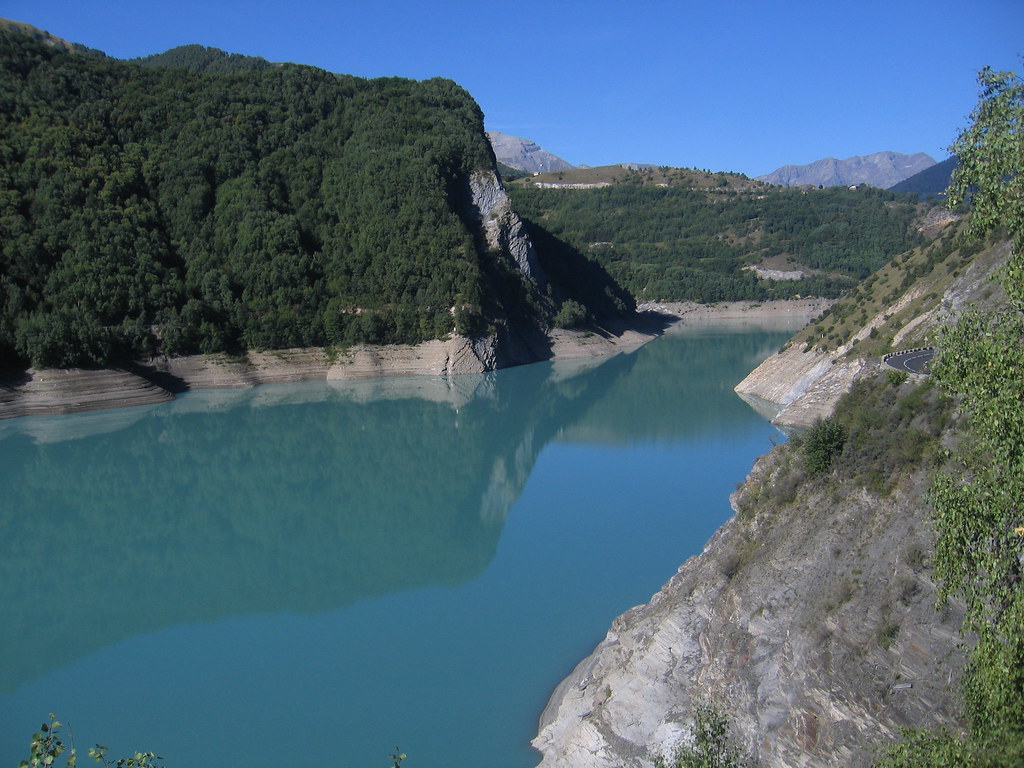 But now comes the contrast. For the scenery is spoilt by the traffic. Enter the first tunnel and if it’s illuminated by a bright orange sodium glow, the acoustics make a small Renault sound like truck bearing down on you. It’s hard not to feel the shoulders tense up as the Doppler effect does its thing. After you cross the Chambon dam the valley begins to open up.

Onwards and upwards and the road is still busy, two or more cyclists will find they have to ride single file for much of the way. There are some cols that you can do without seeing any traffic, there are others that have cars but many drivers know they’re on a road that’s special for cycling. But the Lautaret seems to belong to truck drivers.

There are more tunnels to La Grave and these are not so well lit. La Grave is a small town, look for the fountain if you want to top up your bottles. The further you go the better it gets as the valley opens up, there are views of glaciers and the peaks of the vast Ecrins range including La Meije.

Play word association and Lautaret should be linked to col, Tour and… tailwind. Someone else can explain the meteorological phenomenon but when the sun is shining warm air seems to rise up the valley boosting the rider as they climb this side, a welcome help given the gradient is not so steep. Note the top is kite-ski destination in winter.

Arriving at the top is a bit of an anti-climax as you see the sign for the Col du Galibier. All this way and yet you’re not really at the top and to ignore the Galibier is to miss out on one of the sport’s greatest roads, at least by reputation. But by now the legs are heavy and a fast descent rather than a steep climb is temptation defined. Plus the mind might not be uplifted by the top of the pass itself which is a few jumbled buildings with several large concrete garages that probably house tractors and snow ploughs and look redundant in the summer. If you’re the type that rides up whilst friends and family go by car there is a garden full of high altitude plants to be visited. 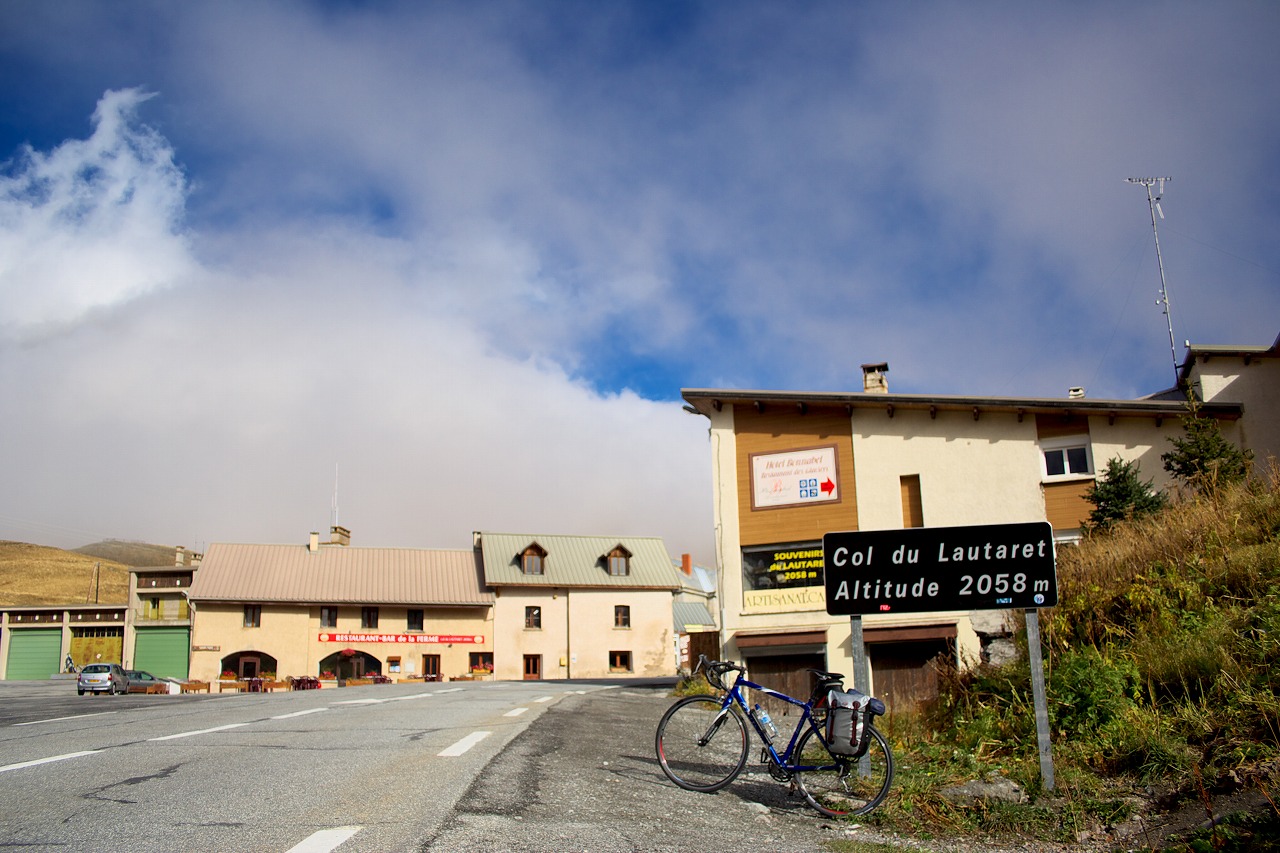 On a normal day
This is a highway, a red artery on the Michelin maps and a route that connects Grenoble to Briançon and on to Italy. It might go beyond 2000m above sea level but it’s a toll-free route so it drains some of the traffic. The Tour’s riders don’t know how lucky they to have closed roads because every other day of the year there are trucks, fumes and more. It’s nominally open all year round but the cyclist should only consider May to October, it might be open but the road can be icy and requires snow tires or chains.

The Tour
First used in 1911, it’s been climbed 29 times but sparingly in recent years. It was crossed in 1976 but again until 2003, perhaps because closing the road for a day is a big ask, even for the Tour. It’s often used as access for the Galibier whose other side is ascended via the Col du Télégraphe.

Racing up is very different to a normal day as it means closed roads and no time to enjoy the scenery. It’s often been the first climb of the day and as the attacks fly and the familiar tailwind blows riders are doing in excess of 40km/h uphill, fatal for anyone on a bad day or nursing a weakness.

The Region
Having not been entirely complimentary about Alpe d’Huez because of its traffic and functional style, the Lautaret is far worse. Bourg d’Oisans makes a useful base with a range of family-run hotels and there are many good roads to ride in the area. Many will climb the Lautaret on their way to the Galibier and there’s the Col de Sarenne and another route up to the Alpe via the village of Villard-Reculas. There are also many other cols in the area that have been used by the Tour de France like the Glandon and Croix de Fer sisters, all of which tend to be open from May until October.

Travel and Access
Grenoble is the nearest city with rail connections from Paris and both Lyon and Geneva airports are not far. The only public transport is a bus to Bourg d’Oisans.

Summary
If the Galibier is the roof of the Tour de France then the Lautaret is its fire escape rear staircase. You’re better off ascending the Galibier via the more tranquil Télégraphe.

In isolation it’s worth riding to say you’ve done it. You’ll never be lonely on this climb given the traffic, it must have been a great climb to ride 50 years ago. But the scenery is timeless and it is more rewarding the higher you go. But visit the region and the Lautaret probably won’t be the highlight.

Next week, the highest col in Italy you’ve never heard of: Nivolet.