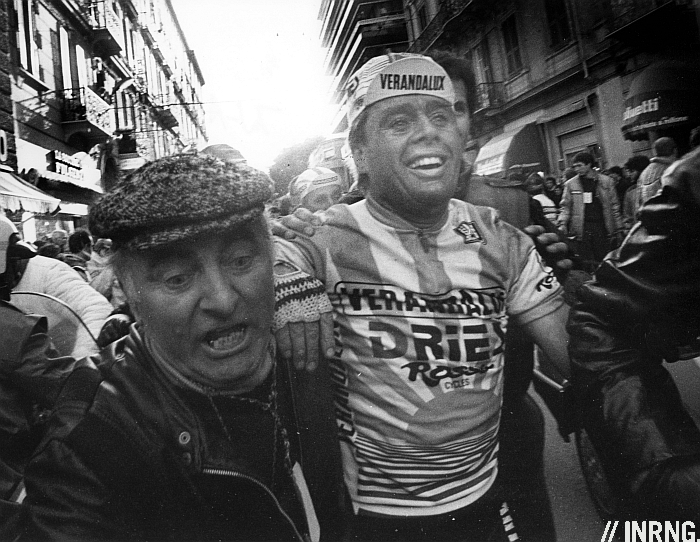 Much is being made of Milan-Sanremo’s route changes. The addition of the climb to Pompeiana this year was subtracted thanks to a landslide and it has meant plenty of uncertainty. This was the perfect event, a one day race that seemed to allow grand tour winners, sprinters and classics specialists alike to contest the win.

But nothing is eternal and the course changes are all part of the race’s history. In fact Milan-Sanremo’s history is one of change, that small hyphen between the start and finish has seen all kinds of variations and alterations.

Mark Cavendish is the latest among many to come out against the changes, he’s quoted by Cycling Weekly:

“I don’t think it’s private that I disagree with the changes… San Remo has its history and Italians like their history. Changing Milan-San Remo is like getting Banksy to paint the inside of the Pantheon in Rome, it takes away from the history and changes the whole course.”

Not to get all nerdy but the Pantheon has allowed artists over the centuries to leave their mark although no urban graffiti artist is going to get near. Cavendish’s argument is valid because Milan-Sanremo is a beautiful race that surely didn’t need to be changed, the perfect balance that made it the only race where Cav can find himself up against, say, Fabian Cancellara, Vincenzo Nibali. It’s rare for these three to start a race together, yet alone to fancy their chances of winning. Just as the Pantheon has been repainted, the route and even the format of Milan-Sanremo has been changed many times.

Two day race
The first edition was held in 1906 but it was a low key event and crucially a two day race with an overnight stop in the spa town of Acqui Terme. The first change came the year after with La Gazzetta dello Sport’s Eugenio Costamagna taking over the race and he made it into a one day race that totalled 288km.

Here come the Belgians
Fast forward to the 1950s. Since 1907 there had only been eight foreign winners. A home win was celebrated and good for business but in 1954 Rik Van Steenbergen won, marking the start of a series of foreign wins. Italians felt “their” race was being stolen by foreign sprinters. What to do? Thwart them with climb.

Turn right for the Poggio

So in 1960 instead of racing along the coast straight into Sanremo they added the climb of the Poggio as a late spike in the course, sending the race up into the hills to blunt the sprinters. Only this just saw a different type of foreigner succeed with the likes of Raymond Poulidor and Eddy Merckx winning.

“If we want things to stay as they are, things will have to change”
Il Gattopardo, Giuseppe Tomasi di Lampedusa

Cipressa
History repeated itself as Milan-Sanremo became a sprinter’s race. Smoother roads, improved bikes and other factors meant the Poggio was no longer a hurdle to defeat the sprinters and after wins by flatlanders like Jan Raas and Roger de Vlaeminck they added the Cipressa. In order to keep the race more open the route was changed. The Cipressa is much harder than that the Poggio and marked a shift in the race and yes, some Italian winners with Pierino Gavazzi, Franceso Moser and Guiseppe Saronni.

Bric Berton
Go back to 2001 and a landslide on the Passo Turchino closed the road. The race had to deviate via the Bric Berton, another pass between the inland plains and the coast; but steeper. RCS didn’t just change the road for practical purposes, it celebrated the change as way to thwart the sprinters after a series of wins by Erik Zabel. The result? The new climb didn’t dynamite race. Zabel won. 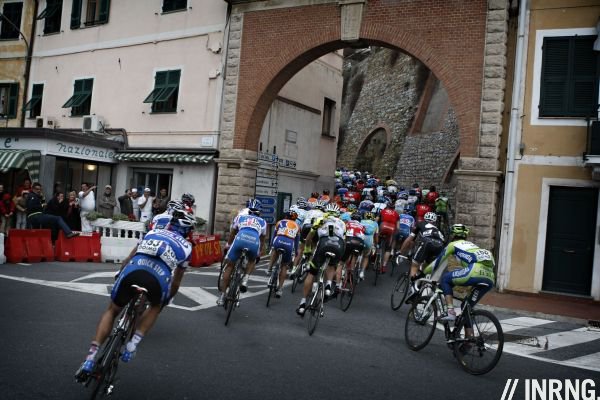 Le Mànie
It might feel like a fixture but the climb of Le Mànie with its arched start was added in 2008. If the Cipressa is harder than the Poggio, Le Le Mànie is even harder with 6.7% for 4.7km and with a steady 11% ramp that dooms many a sprinter. 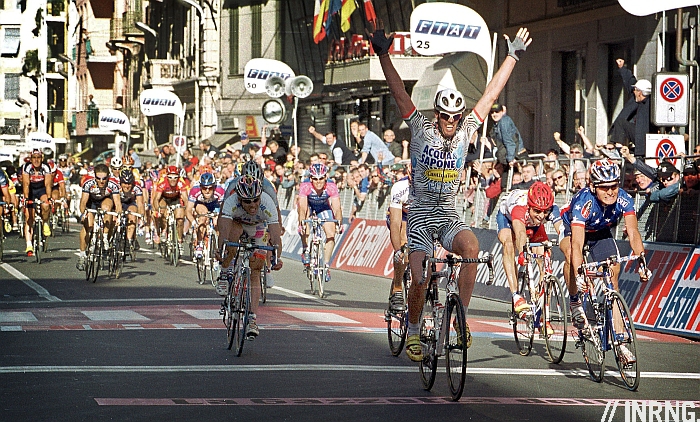 Sanremo
Even the finish has changed. It always used to be on the Via Roma, Sanremo’s principal thoroughfare. It’s a busy street with swanky stores selling silk ties or cigars. But the shopkeepers protested that the race hit their takings and so the finish was moved to the Lungomare, the sea front. Tactically this didn’t change much although it adds about a kilometre and if there’s a sea breeze then you need to pick where to sprint, either in the shelter of the barriers or against the other barriers to deny rivals a slipstream. But the biggest loss is the symbolism and comparisons, riders today no longer finish on the same road as Eddy Merckx or, pictured, Mario Cipollini.

Oh and on the subject of change it’s on Sunday this year after it was always held on a Saturday. The irony of the Pompeiana climb is that it seemed designed as a pro-Nibali choice but he’s out of shape anyway this year and the pro peloton is so diverse these days that trying to engineer an Italian win is near impossible, after all Italians make up about 13% of the pro peloton.

Enough is enough?
So far this is a tale of regular changes but does this mean we should accept change as the norm? After all it brought us the Poggio and Cipressa, without these additions the race would be boring, possibly extinct. So complaints about Pompeiana can be viewed as reactionary, conservative; or if you’re a sprinter, self-interested.

Many races have changed because the circumstances have changed. Take the Tour of Flanders, you might not like the Old Kwaremont-Paterberg combo but at least it can be explained by the need to sell VIP tickets. With Pompeiana you struggle to see what purpose it solves because it will make the final more selective and therefore obvious but presumably RCS want to provide more action and suspense although it still comes very late in the race.

Conclusion
Milan and Sanremo are fixed but much else has changed. From two days to one and then in recent times they’ve added more and more climbs as a reaction to sprinters scaling the climbs. These additions form part of the race’s history. The Poggio is celebrated as a mythical road but it’s really just a plain old access route for the rest of the year and other additions are even more recent.

I can understand Cavendish’s complaints but as a sprinter on Belgian team history is against him, this is a race that has often been changed precisely to block riders like him. But this time it feels like the changes are unnecessary, as if a perfect race is being sacrificed on the altar of novelty and fiddling. If so the gods were angered, Mother Nature intervened to block the Pompeiana climb. This Sunday’s course will revert to the “old” version with a pre-2008 course. All the more reason to watch. 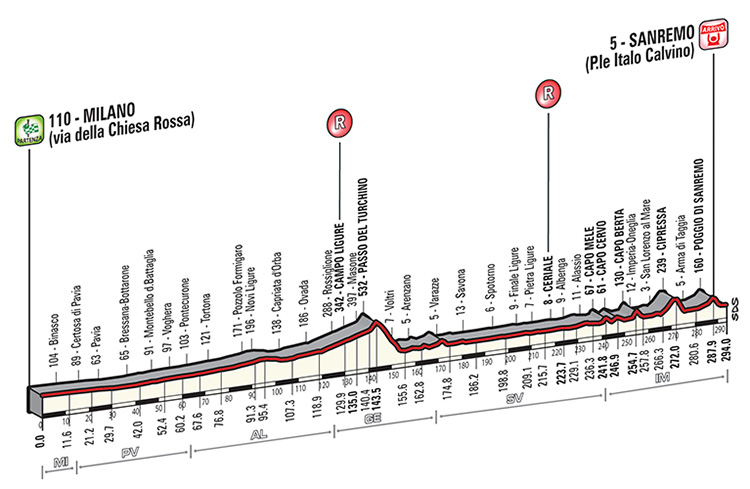