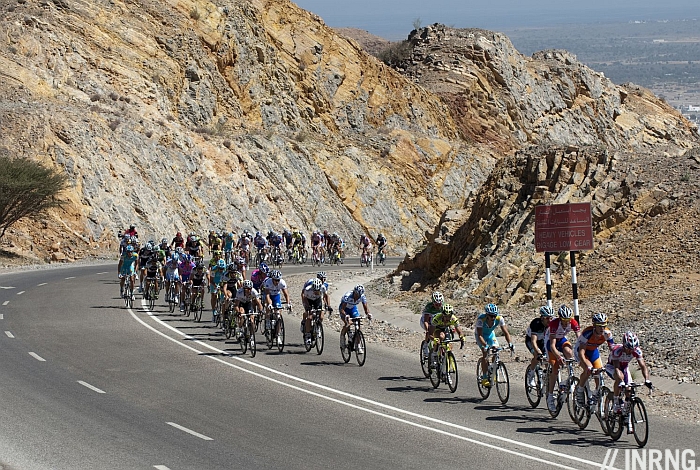 The Queen Stage of the Tour of Oman finishes on the Jebel Al Akhdar, the “Green Mountain”. A tough climb with an inappropriate name, it’s also a unique ride in a landscape that is very different to the typical Alpine climb. 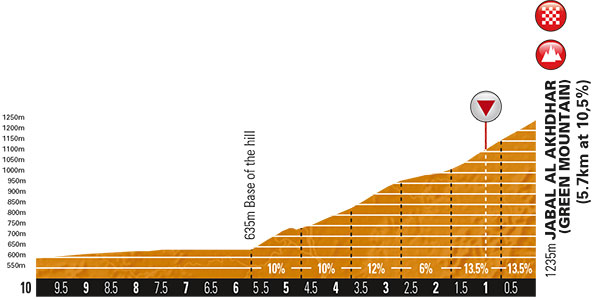 The Jebel Al Akhdar is just one part of the Al Hajar mountain range. This climb starts near the scenic town of Birkat Al-Mouz and proceeds north into the mountains. The Tour of Oman stops after 6km… but the road goes on climbing for twice as long. 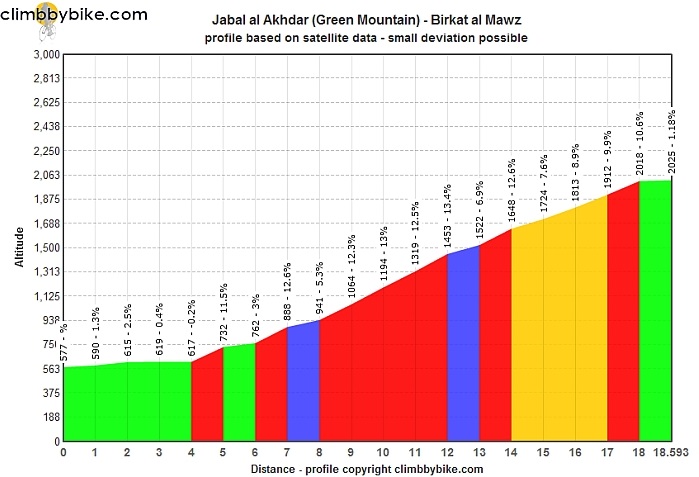 The Feel
There can’t be a friendlier to a climb as police greet you before starting the climb (*update: see the note below). They’re reviewing all the cars, only 4×4 cars are allowed up as it’s so steep. But once the greeting is done you quickly understand that just as going up will be hard, you need to worry about the descent, both for your brakes and that of drivers. It’s steep and crushingly so, the road hits 10% from the start. Progress is slow and the landscape is so big that right from the start you feel small, a speck on the landscape.

The road passes by slowly. Mark Cavendish mentions in his book “At Speed” how a long finishing straight can make some sprinters launch too early because they see the finish line and its arch and jump out of instinct when a cooler head would wait for the right moment. This would be Cav’s nightmare because climbing here invokes the same miscalculations only on an exponential scale. That “next bend” looks so close but it may well take three minutes to reach.

For better or worse the Tour of Oman’s ascent is arbitrary, a finish line erected midway on the climb. The road goes on…and on… well after the Tour’s finish line. Presumably they don’t need anything longer for the race. But the visiting cyclist must ride on to the top. 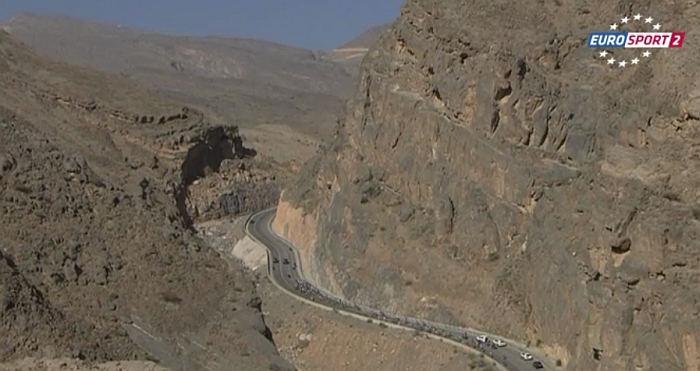 Green Mountain? Do not adjust your set

The road itself is impressive, high quality tarmac and with long ramps and wide sweeping hairpin bends, a civil engineering delight and perhaps excessive given only small villages sit at the top but it seems designed to allow Omanis easy access to the mountain cool, a very precious resource in this arid land. Eventually the road ends on the plateau but there’s no mountain pass or obvious end point with roads and tracks going off to the side in different places.

It wasn’t apparent from the start but it might remind some of the Col de Laffrey in the French Alps. This climb near Grenoble is on a main road and an infamous accident blackspot because of a steep gradient and its long, straight pitch; apparently it was long used by a truck company to test its brakes. Let the imagination rip for a moment and imagine if an asteroid landed close to the Laffrey and the area was blow-torched dry of vegetation, stripping back the landscape to the rock while the tarmac road and street furniture – oddly it has street lights – survive the inferno. Alternatively maybe we colonise Mars one day and begin to build roads. That would be easier given the reduced gravity for these slopes. The mind wanders during such a climb but thirst is bound to bring you back to more immediate matters. Indeed it’s all so dry, the “green” name seems inappropriate compared to the lush Alpine pastures. There is water around – the start town if Bizkat has lush date palms fed by trickling falaj streams, the nearby town of Nizwa has a large ford to ride across and they grow crops in these mountains that can’t be cultivated elsewhere.

Most other climbs in this series have been scaled several times or if not, similar climbs have been done at different times of the year. But this has been done only once, in February and it’s hard to imagine in the blaze of the summer heat.

Cycling in Oman: as a sport it’s not big but you’ll see some expats out for a ride and one or two locals. Hundreds of kids – the country has a young demographic – rattle around on rusty steeds. It’s safe cycling, people seem surprised by the cyclist. You’ll get cheered up the Jebel Al Akhdar, presumably in the say way Westerners go “wow” when they see a camel wandering across the landscape as it’s the first time you see it.

History and Future: amongst cycling fans this climb is famous for the race which has climbed up here twice already. The Tour of Oman’s future is unsure after 2015 but there’s been time to put this on the map. Otherwise the history is more profound, a source of water and therefore life for thousands of years.

Eat: need to replace the calories? Dates are the local food and they’re a good source of energy, packed with fructose. There’s a range of derivative products from syrup to cakes. Better still visit nearby Nizwa for the halwa, a confection made from syrup, saffron, cardamoms and rosewater made form roses that grow in the cooler mountain air. It’s boiled into a firm but rubbery sweet.