Milan-Sanremo is famous for its tension, the longest race of the year is often decided in the final moments, a long wait that gets more and more nervous as the finish approaches. Now there’s a long wait to find out what’s happening to the course and whether the crucial new climb of Pompeiana is in or out.

A rough road and a wet winter mean the road might not be viable and as you’ll read below, municipal bickering is part of the problem too. Velonews reports there will be a meeting next Wednesday but what if this isn’t conclusive? Weather damage is understandable but the uncertainty is becoming inexcusable.

Why it matters
Announced last September the inclusion of the climb to Pompeiana and its descent has marked a big change in the finale because it’s a hard climb and a narrow descent. In the past the Cipressa and Poggio combo was just enough for a sprinter to hold on because each climb was spaced apart by a flat section along the Via Aurelia coastal road. Now Pompeiana sits in between meaning more climbing and less recovery. 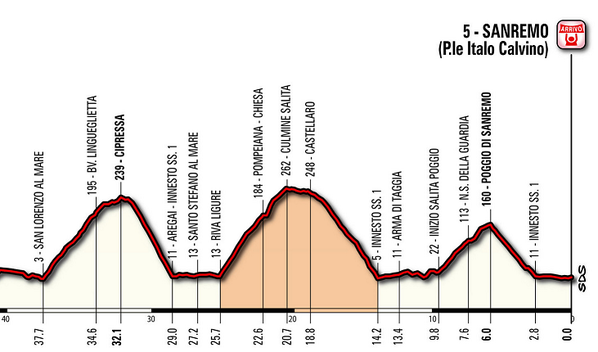 In short this climb is decisive, it won’t pick the winner it does change the cast of characters who will arrive in Sanremo to dispute the win. Mark Cavendish had already announced he’ll never ride again. But if Pompeiana is out then the facts change and he could be back and others too will alter their view. Sprinters will be tempted and climbers will be dejected; Chris Froome has already said no grazie after hearing Pompeiana was out.

Either way riders and teams need to know. Some will have been planning and training on the basis of this new climb; punchy classics riders may have aimed to bring forward their peak form to mid-March rather than late April and the Ardennes. This is the longest race of the year, 300km and a bit more if you include the neutral start. This is not something to improvise nor enter at the last moment.

But that’s exactly what is happening with RCS who seem keen to find a solution to use the climb and are waiting and waiting. Here’s race boss Mauro Vegni to Velonews:

“Maybe we can have some minor work carried out that’s good enough for at least for the race to pass… …They could stabilize it enough so that Milano-Sanremo could pass then carry out other work later. We have to understand just how serious the problem is; after that, we’ll know if it’s possible to do something or not.”

No can do attitude?
There’s also the negative image of Pompeiana and the surrounding area. Let’s not pretend the world is watching but all the same this race has an international reach that has made the tiny villages of Cipressa and Poggio famous.

The race is coming to town for the first time… only to meet a roadblock. But we must note the village of Pompeiana is only a part of this. The actual roadblock is near Castellaro, the next village down the road and its mayor Alessandro Catitti has closed the road. There’s talk of damaged guard rails by the road and potholes but there’s been plenty of time to makes repairs and besides, a pristine crash barrier in Italy is as rare as an unscratched car. Plus the steel rails offer little safety, their height is that of the front wheel and a cyclist risks going over the barrier cartoon-style. And that’s when there are barriers, long sections of the descent have stone walls, concrete edging and in many places, nothing.

If potholes are quick to remedy, the big problem is heavy rains over the winter. There’s been a landslide. But don’t imagine a scene of biblical devastation, some dirt has been washed onto the road and large concrete blocks have been placed on one side of the road as a temporary restraint. The blocks could be lifted and the dirt could be cleared in a day or two but this would only be temporary to allow the race to pass. And all this pre-supposes a decision could be taken fast. But local website sanremonews.it reports the section of land that’s slipped is on the border between the hill village of Castellaro and the coastal town of Taggia (note the piece doesn’t even mention the bike race) meaning municipal haggling. We have a situation where each side wants the road open but attributing the costs is taking time plus expert visits have declared that the earth has not stopped moving, there could be more landslides. 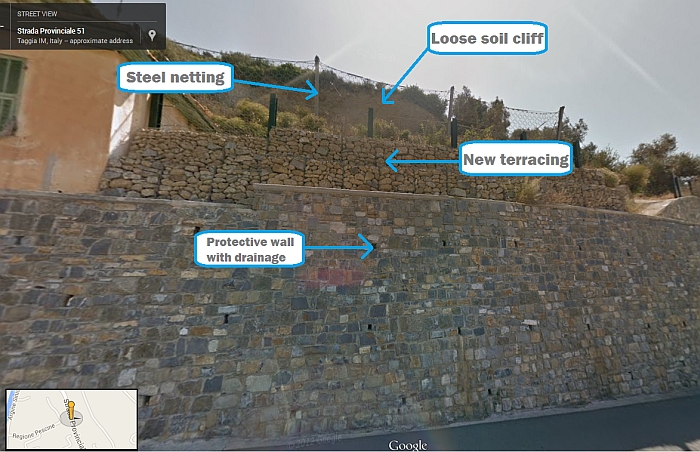 From afar it looks petty but on the ground these works are expensive, a lot of the road is bordered by collapsed terraces as farmers have surrendered their small plots and old drainage channels have been abandoned meaning problems higher up on the hill have effects lower down… and often by the road. Loose soil and landslides are an annual problem on this road, the road is lined by expensive netting, walls and other engineering works. But so are other roads too, it’s the norm inland.

So what if the climb is dropped?
It was announced with a fanfare but if the race cannot pass, so be it. RCS can explain their safety concerns and admit the weather has taken a toll plus announce the race will visit next year: few will care. In fact many fans will rejoice as it could make the race more open again rather than just another hilly classic. More importantly teams and riders get the certainty they need to target the race.

Summary
There are 30 days to go and we still don’t know if the most strategic point of the race is in or out. Worse, it seems RCS is hoping for a  quick-fix which could get washed away if it rains. Roads get damaged and landslides happen, the sport has to deal with what nature brings and there’s no shame in cutting the climb. You sense the authorities are indifferent to Milan-Sanremo, they want the road open but won’t move heaven and earth, or even earth for La Primavera.

RCS shouldn’t let the saga drag on and wait for others to act. Pompeiana totally alters the balance of the race and a major rendez-vous like this shouldn’t have uncertainty over such a crucial road. The saga has gone on too long, it’s time to decide.

Previous post: Why isn’t the Tour of Oman on TV?