Roads to Ride: The Schelde

Most of the places so far in this series have featured mountain passes famed for their difficulty, history and stunning scenery. But here’s the opposite, a riverside cycle path that’s neither scenic, hard nor famous. But this is a key route for Flemish cyclists and you’ll spot more pros here than on the Koppenberg.

The Route: you can ride along much of the Schelde but here’s the section between Gent and Oudenaarde in East Flanders. There are countless access points to join and leave the path. As you’d expect it’s flat. 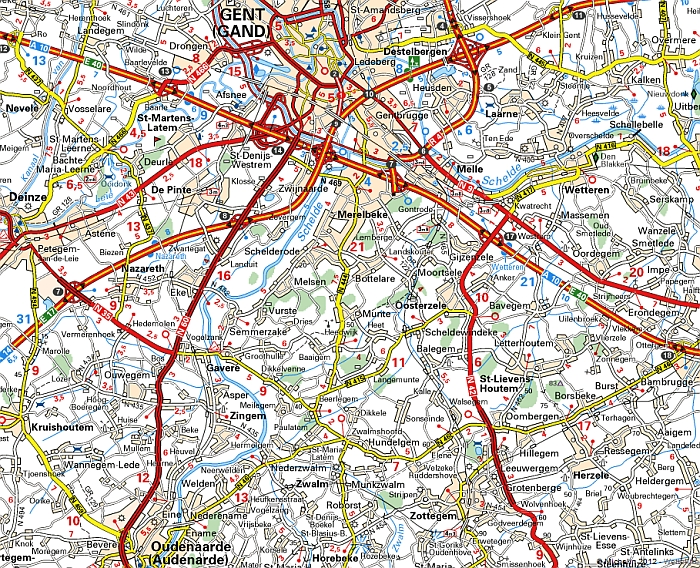 The Feel: dog-walkers walk, children learn to ride their bikes and barges chug up and down the sleepy river. It’s all so slow, inviting the rider to put the chain in the inner ring and slow down. But this being Belgium – whoosh – along comes a bunch of cyclists and the wildlife and human alike scatter. It’s one of the most concentrated routes for racing cyclists. The calm never lasts long.

The route is useful because it takes the cyclist away from traffic. Flanders is a busy place, it might be the home of bike racing but it’s got a crowded vibe and this is a way to escape the traffic. The feel is whatever you want, put it in the 11T if you want or just spin the legs. There’s a 30km/h speed limit but…

Scheldepeloton: the Scheldepeloton is a group out for regular rides in the area and take their name from the river. They don’t only use the path and they’re not the only group. But they have a reputation for speed and the ride often includes local pros, kermesse kings and others with fiercely contested sprints. Het Nieuwsblad describes the group as a mix of old racers, suspended doping cheats, pro riders and talented espoirs who hold a “race” every weekend.

Complaints about the Scheldepeloton have prompted municipal authorities to deploy ribbelstroken or rumble strips to thwart the speeding pelotons. Only one account says they’re useless, a tiny vibration that won’t jolt racers used to the cobbles but which risk slowing people carrying their shopping home.

Celebrity spotting: ditch the macho notions that real cyclists use roads and Flandriens only train on cobbles and bergs. These cycle paths are full of keen cyclists and many an elite rider will use the path. Maybe just a section or two, perhaps for a recovery ride or more but the path is often full of profs.

Weylandt Memorial: near Zevergem there’s a memorial to Wouter Weylandt by the path which also commemorates Frederiek Nolf and Dimitri De Fauw. It’s a solid Belgian tribute: no marble or bronze, just a rectangular block of bricks. It’s by the Meersbloem café on the left bank, the “finish line” of the Scheldepeloton sprint.

History: Belgium has a big network of rivers and canals which were essential for moving heavy goods like coal and steel. The Schelde river (Scheldt in English) is one of the most important arteries running through the country to Antwerp, once Europe’s richest city and today still a vital port. You can’t overestimate the importance of this river to Belgium’s industry, it’s played the equivalent role of a fibre optic cable today or a highway or railway in the past. By following the level course of the river barges could move heavy loads of coal, steel and other essentials around northern Europe because the Schelde is connected by canals to other rivers like the Rhine, Meuse and Seine. The paths beside the canal allowed horses to tow the barges. Today barges still ferry goods up and down.

Scheldeprijs + Scheldecross: if Belgian geography isn’t your thing, many cyclists will know the Scheldeprijs race held each April, sometimes for its French name, the GP de L’Escaut, Escaut being the French name of the river. The race has been the property of Mark Cavendish in recent years but tellingly Marcel Kittel got the better of him last year. There’s also the Scheldecross race. Both are held in Antwerp.