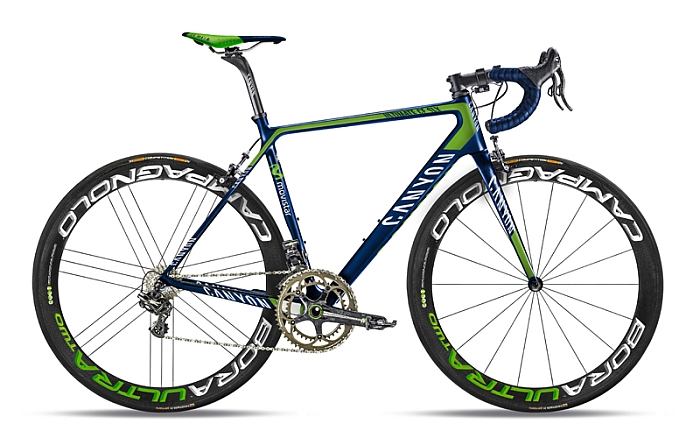 Here is the list of who is riding what in 2014. You’ll find all the pro team bikes for the 18 World Tour teams and the 17 Pro Continental teams.

As ever these deals are commercial and those adverts saying “the choice of” such and such rider? More like the sponsor offered the largest sum of money to the team and management said yes, riders rarely get a say in what they ride.

Note the other corporate relationships. Fulcrum is brand belonging to Campagnolo. SRAM owns Zipp and Quarq so a team sponsored by SRAM will normally use their sister components too. Similarly those with full Shimano sponsorship have to take the full package of Pro components and Shimano wheelsets.

Overall there’s doesn’t seem to be a big change in bike technology for 2014, just a few new frame models. We’ve still got €10,000 top of the line bikes that rely on 10 cent cable ties to strap the CPU for electronic gearing to the stem.

Note several teams don’t have comprehensive sponsorship deals to cover everything and consequently they use a mix-and-match of parts, for example Rotor chainsets with Campagnolo gears and brakes for Topsport Vlaanderen-Baloise and Garmin-Sharp are sponsored by Mavic and Rotor and buy their Shimano parts.

On the subject of incomplete sets, the list above is provisional and based on a mix of enquiries, and trawling Twitter and Facebook in the last few days and the info might be out of date. Suggestions for updates and corrections are welcome.