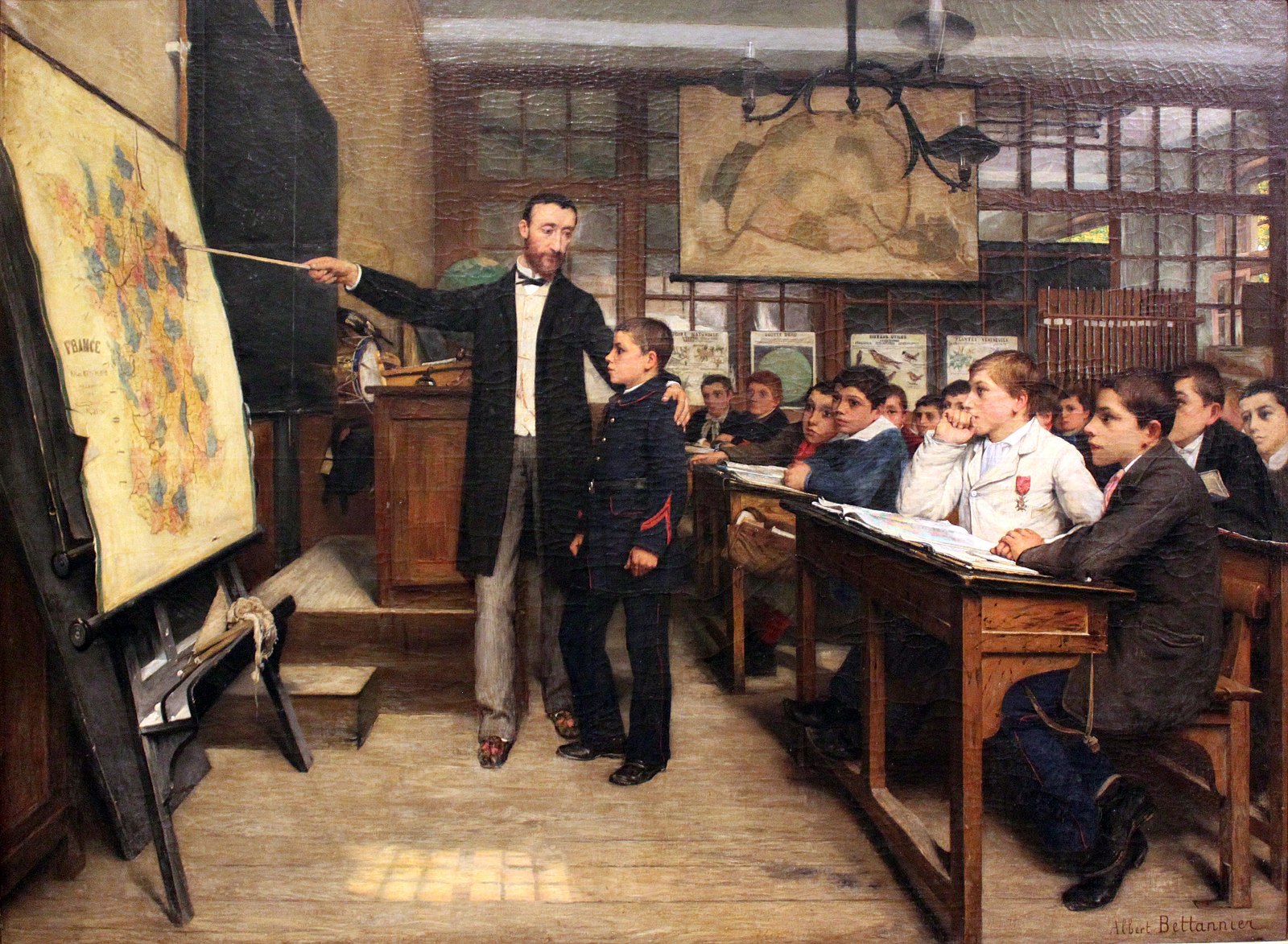 What do you see in the painting? A class, some boys and a map of France. Look closer, note the military uniforms. The teacher is pointing to the Alsace Lorraine region to the East of France which was lost to the Germans in the Franco-Prussian war of 1870-1. What’s this got to do with Tour de France? Everything.

We celebrated the 100th Tour de France this year and praised Tour founder Henri Desgrange as a visionary entrepreneur, publicist and sports promoter who launched the race to promote sales of his L’Auto newspaper. But we skipped over the parts where Desgrange labelled Prussians “bastards” and called on his countrymen to “slam the butts” of their rifles into German chests until the blood spilled.

The Tour de France was created to sell newspapers but it was also used to promote French nationalism.

The Enormity of France
It’s hard to imagine the early editions of the Tour de France. Daily distances of over 300km were the norm, all on gravel roads and primitive bicycles. But the enormity and daring has to be seen in the context of its time. Historian Fernand Braudel wrote of the “tyranny of distance” and described how France might be one country but climates, diet and vegetation were so varied that talk of national unity and a common understanding was hard to grasp for many who felt removed from compatriots at the other end of the country. By the start of the 20th century the railway had contributed to making France more accessible but the majority of people had never gone much beyond their home town or valley. The Tour de France was another way to unify France, to prove distant cities like Nantes and Marseilles could be linked by a mere bicycle. More so here was a race for all of France rather than linking two cities.

Dreyfus affair
Desgrange was close to Maurice Barrès, a writer, politician and big-time nationalist. Barrès started out as a novelist but his ideas led him to take sides in the Dreyfus affair. This was huge political scandal involving a French army officer wrongly-convicted of supplying intelligence to the German empire. Nationalism, anti-semitism, espionage and more turned the case of one man into a wedge issue that divided France.

Revenge
Barrès was a leader in the nationalist concept of Revanchisme, based on the word for revenge. It wanted France overturn the Prussian conquests of its eastern regions, the Alsace and the Lorraine, in 1871. The painting above depicts a scene of schoolboys being taught about the lost region of France. Note Barrès is no fringe figure, he was well-known for his writing and became a parliamentarian and was an influential voice.

By now you get the scene, a country nervous about the German presence to the east and demonstrating nationalist insecurities. Back to cycling and the Tour de France. Desgrange took delight in drawing routes that celebrated the French border. The Ballon d’Alsace mountain was included in 1905, not just for the climbing challenge but it marked the border with the German empire, the provocative frontier between psychogeography and nationalism. He then challenged the Germans and in 1906, 1907, 1908 and 1910 he sent the Tour into the “occupied” Moselle region, albeit with the accord of the Germans. But with tensions rising Berlin refused in 1911 and Desgrange routed the race right along the Lorraine border with a visit to Longwy, a part of the Moselle region held by France.

The Tour is only once a year. Desgrange was a full-time nationalist and commissioned Barrès over 50 times to write pieces in L’Auto between 1906 and 1907. But Desgrange went full-fanatic on the outbreak of war in 1914. He wrote a full page article in L’Auto calling on riders and all young French men to join the combat, employing a tone that shocks today:

My little men, my dear little men, my little French men. Listen to me well. For the 14 years that L’Auto has been published every day it has never given bad advice, eh? So, listen up. The Prussians are bastards… …If I use Prussians without confusing them with Germans, it’s because I believe all the German brains are not yet poured into the Prussian mould. You can see their dirty square heads, stupid sheep, without thought, the heads of butchery. My little men… you have to have these bastards. Believe it. It’s not possible for a Frenchman to surrender to a German.

…But watch out. When your rifle butt is on their chest, they’ll ask your for forgiveness. Don’t let yourself be taken in. Smash it down without pity and when you’ve smashed it well and you’ve crushed a good number, then we’ll see. But in the five litres of blood that their carcasses hold, make four of them flow and you’ll see that, when they’re down to one litre per man, they’ll understand that Alsace and Lorraine are French lands. We must be rid of these evil imbeciles who, for four years, prevent us from living, loving, breathing and being happy.

And so it goes on, you get the tone but can read the full piece at humanité.fr. It’s ugly and violent to read today but remember to see it in the context of war being declared and France being threatened. Desgrange went on to serve in the army, he survived and made plans to restore the Tour de France.

Desgrange took fresh delight in the 1919 Tour de France. Launched on the day the Versailles Treaty was signed and France reclaimed land from Germany, it included new stage towns like Strasbourg and Metz, back on French soil. Metz would be on the route of every Tour until 1939.

Desgrange’s nationalism was later used for other purposes. In the 1920s interest in the Tour began to waiver as foreigners won the race and trade teams used negative tactics to lock down the race. The response? National teams were introduced and French success soon returned.

A mirror of France
And as Jean-Luc Boeuf told L’Express, the Tour is a mirror of French political life. Its route reflects contemporary themes, when France was nervous about its border with Germany the Tour rode in an act of national unity. But later in the spirit of post-war harmony it had starts in Amsterdam and Brussels in the 1950s. In 1992, to celebrate the Maastricht Treaty that turned the European Community into a deep political union and today’s European Union, the Tour visited all of France’s border countries. Perhaps Desgrange would have been horrified? But a contemporary Desgrange might also welcome this, a race used to promote Frenchness and francophonie. 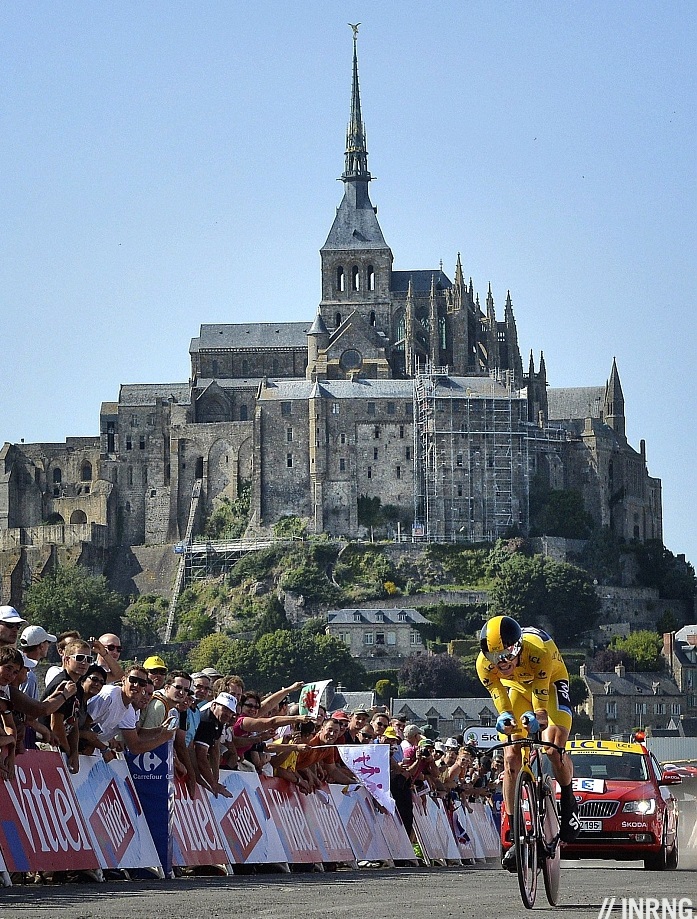 Today the Tour is no longer a political concept but a corporate sports marketing event. The Tour reflects French business, ASO uses the race as a vehicle to earn money abroad via TV rights, grand départ bidding wars, tourism and even Japanese criteriums. Roads, high speed trains and more make France a smaller place. But the Tour remains a three week geography lesson for many, instrumentalizing the landscape. The largest segment of the TV audience in France is composed of people tuning in for the scenery, many get to see how their compatriots live or at least where they live.

2014 Tour
You wonder what Desgrange would make of the 2014 route. A visits to Ypres would satisfy. He’d delight at the visit to Reims, a spiritual home of French nationalism as a place famously linked to celebrity witch Joan of Arc but also the scene of Germans surrender in May 1945. Seeing the bunch dance beyond the “blue line” and over the Vosges mountains into once German terrain would surely be the ultimate satisfaction, especially since these lands have become wholly French.

But Desgrange has gone and so have the accompanying attitudes from a century ago. Fortunately the Vosges are included today for sporting reasons rather than politics, they’ll select riders and boost television ratings. But as the Tour commemorates the past it will have navigate a careful route between remembrance whilst avoiding references to Desgrange and his desire for revenge.