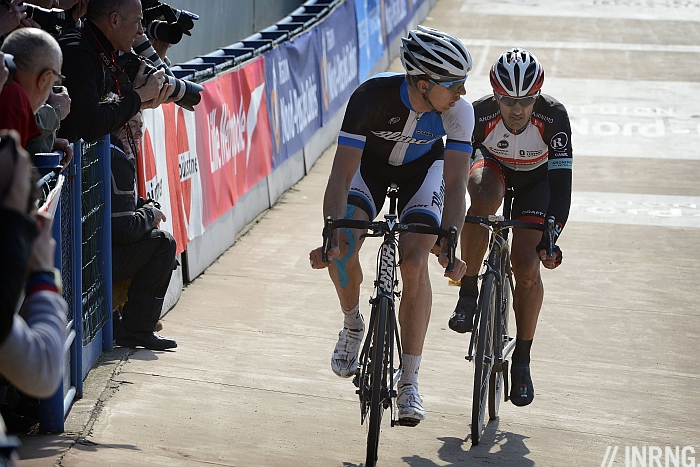 I’m going to pick five moments from 2013. They are a personal choice. With any list you often omit more than you include but I’ll explain each moment. They’re presented in no particular order.

The 2013 edition of Paris-Roubaix was a fine edition to watch live. Glance at the results and you’ll see Fabian Cancellara won ahead of Sep Vanmarke. It was the Swiss rider’s third win and he dispatched a promising Belgian rider. It was a result that was predictable before the race and expected after it but day was packed with surprise and action.

Cancellara had a great spring campaign. Third in Milan-Sanremo and wins in the E3 Prijs and the Tour of Flanders made him the obvious pick for Paris-Roubaix, more so since Tom Boonen was out of the classics and nemesis Peter Sagan did not start either.

The race was splitting up early with the Arenberg forest taken at speed. But it was on the wrist-cracking Mons-en-Pévèle sector that the race came alive. Stijn Vandenbergh (OPQS) and Sep Vanmarcke (Blanco) took off from the lead group. As they crossed the Bourghelles à Wannehain pavé Cancellara went for it and only Zdenek Stybar (OPQS) could hold his wheel. Stybar sat glued to Cancellara’s real wheel because team mate Vandenbergh was up the road. Cancellara had to tow a rival up to the front even if it meant being outnumbered.

But Vandenbergh was flagging and Stybar crashed out on the Carrefour de l’Arbre, he was exploring the edge of the cobbles and tangled with a fan, both were probably at fault. This left Vanmarcke and Cancellara to ride to Roubaix together, each tried an attack on the way. The suspense lasted until after the bell rang out the last lap on the velodrome. Cancellara’s lost several sprints whilst Vanmarcke’s won races with ice-cool finishing but in the end the favourite won.

Why the highlight?
If the result was predictable it was watching how it was achieved that made it compelling. It was the equivalent of an action film like Die Hard or James Bond, you almost know who will win but still sit down to watch for two hours to see how he does it. Only this was not a staged production but real.

Sometimes Paris-Roubaix can feel like a circus, a lottery as selection can be forced by chance and misfortune rather than form and experience. But this year’s edition had plenty of natural selection. In the end Cancellara’s only crash came from fatigue when he fell off the bike, to tired to dismount. 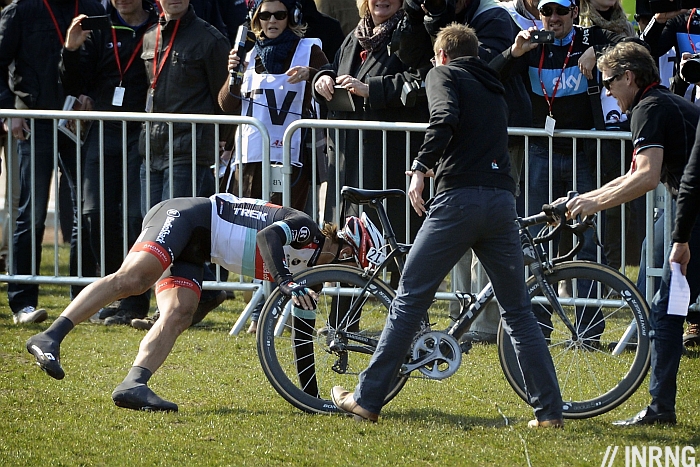 Next post: Nationalism, Psychogeography and the Tour de France