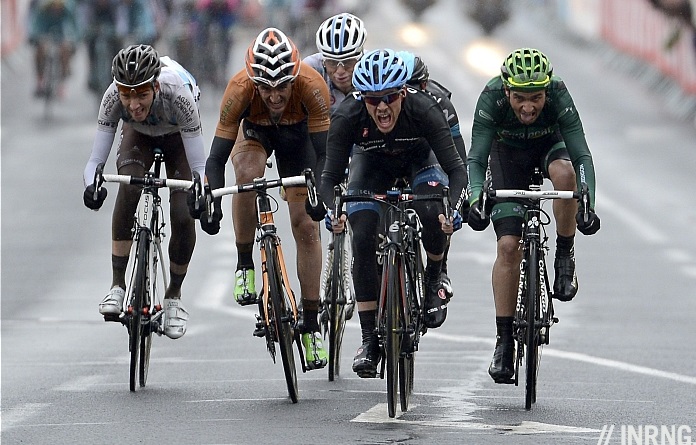 As part of a series of highlights of the year, here is Stage 3 of Paris-Nice and its exciting finish where the terrain, weather and riders all combined to make a thrilling finish.

There’s also a video of a Sky rider crashing that’s used by the UCI as a classroom case of how not to descend.

The whole video is above but the action’s concentrated in the final 15km. The race is in the central Auvergne region of France and you can see winter has been long, look at the brown grass by road that has sat under snow for some time. The finish was in Brioude, home of Romain Bardet (Ag2r La Mondiale).

Bardet had announced he was after this stage, an interesting exercise in pressure. But it worked. He was well-placed on the climb and then got away on the descent with Andrey Grivko (Astana). In time David López (Sky), Jon Izagirre (Euskaltel) and Davide Malacarne (Europcar) joined the pair. Then with 10km Richie Porte (Sky) and Andrew Talansky (Garmin-Sharp) jump across, the Australian ushering the American to do the work because there was already a Sky rider up the road. This changed the dynamics of the break with two GC riders up the road but their move was only dangling ahead of a large chase group. At times the chase seems to close to reeling in the move.

Talanksy wins, he did sit on but that was his right with two Sky riders in the move. Listen carefully and you can hear his “yeah” as he crosses the line.

Crash Course
Incidentally Vasil Kiryienka’s rear wheel slide wipeout (12km to go, 1h02m10s in the clip) is used by the UCI in a training video at its World Cycling Centre during a session on riding skills to help newcomers get used to the prospect of Alpine descents. “Don’t use your rear brake too much or this will happen” is the lesson.

Why the highlight?
Bad weather was a recurring theme during the first half of the season. You surely remember the snowy scenes from Milan-Sanremo and the Giro but don’t forget all the other races during the spring where the riders were frequently dressed in winter gear. Paris-Nice is often cold but 2013 was wet too. This highlight isn’t to revel in the cold and wet although rewatching the video is almost enough feel the damp air on your chest and taste the grit sprayed off the wheels. What makes it a highlight was the use of the descent and the rain in order to escape. The climb was crucial but the action happens on the descent, slippery in the rain and mud from farms. It’s all about the skills involved on a narrow and unpredictable descent and then the chase between the break and the bunch.