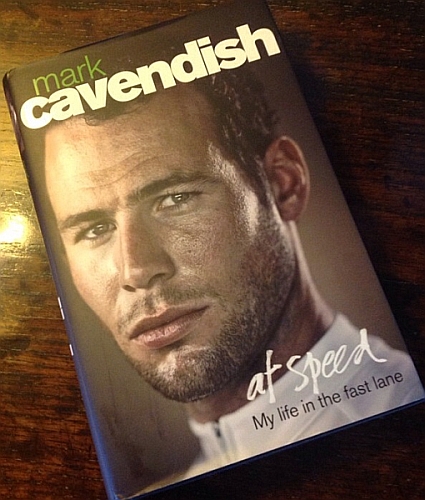 Mark Cavendish’s new book “At Speed” is out and the publishers asked if I was interested in giving away a copy in a competition.In fact the lucky winner will get the book and a signed team jersey and two other podium finishers will get a copy of the book each.

Now online competitions are too easy with Google so I like to pick a question that you can’t you the answer to… but you can guess.

Not having read “Boy Racer” I’m aiming to read this, my appetite whetted by Daniel Friebe’s plugging on the Humans Invent podcast. But here’s a way to get the book faster than me…

You’ll know Mark Cavendish as the best sprinter in recent years although I think it’ll be fascinating to see how he copes with rivalry from Marcel Kittel and others. “Cav” has never had the peloton’s biggest power output but has made up for this with high leg speed, an aero position and a sharp sense of positioning. He recently explained the art of sprinting to The Telegraph:

“For me, it’s like a calculation, a series of movements, a series of chess moves. Not thinking, not having to react. Just reacting. By the time we start the sprint, my heart rate is probably 20 or 30 beats slower than the other guys. So many cyclists train their bodies. They don’t train their mind. I constantly do puzzle books. Smash through them. My iPad’s full of them. Logic puzzles. Bridges. Slitherlink.”

He pulls an iPad out of his bag. A picture of his wife Peta adorns the background screen as he opens up his latest puzzle, a variation on Sudoku.

“Hanidoku. You’ve got this honeycomb. Every single line has to have a consecutive run of numbers. Could be one to five, could be two to six. So there’s got to be a five here, because there’s a four there, but it can’t go with another five. Do you see?”

Does he do puzzles to nurture his cycling brain, or are both symptoms of his basic inquisitive intelligence? “A bit of both. Like, I play Scrabble against random opponents, and if I lose that I’m as pissed off as if I lose a Tour de France stage.”

I’ve picked a question only a few people know: What is Mark Cavendish’s IQ score?