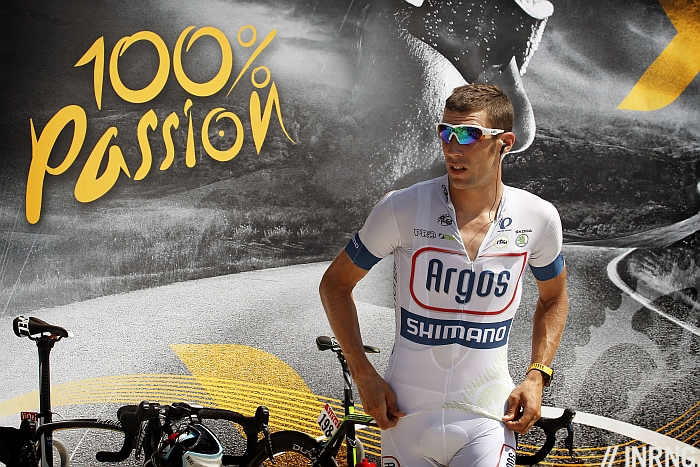 Who had the biggest year in 2013? Certainly in qualitative terms Chris Froome is the obvious choice and winning awards and exhibition races alike. But what about Adam Hansen’s Giro-Tour-Vuelta grand tour trinity? All valid but in terms of pure numbers it’s Albert Timmer (Argos-Shimano) who’s had the biggest season.

That’s the table of the number of kilometres raced in 2013. Timmer is top thanks to a very busy season that started in January with the Tour Down Under and ended with the Tour of Beijing early this month. Along the way Tirren0-Adriatico, the Volta Catalunya and then the Giro and the Tour de France. No Vuelta but he was still racing in September. It’s safe to say Timmer is not a household name in the Netherlands – where his name means “carpenter” – and his results don’t show too much at first glance. Just one top-10 all year and his average finishing position this year was 110th place. But this doesn’t tell the proper story as he’s a vital engine in Argos-Shimano’s sprint train, a locomotive that’s helped to set up many of Marcel Kittel’s wins this year. Timmer isn’t just the leader in the kilo count, he’s topped the number of race days too.

What else stands out?
Adam Hansen’s grand tour triple puts him on 98 days, remember he’s now done seven grand tours in a row and this year he won a stage of the Giro.

Philippe Gilbert and Thomas Voeckler both stand out too. Gilbert’s been chasing his form all year although in past year’s he’s been one of the biggest mile-eaters of the peloton. The same is true with Voeckler, who’s been even more consistent with a huge count every year. OPQS have got their money’s worth from signing Mark Cavendish, he’s been busy since winning a stage of the Tour de San Luis in January all the way to the Tour of Britain and 19 wins in total or a win rate of 19.8%, only bettered by Peter Sagan (22 wins, 13,647km, 85 days, 25.9% win rate).

The count above shows the rider with the most kilometres per year from 2007 to 2013. Timmer’s total is the smallest of the lot. Maybe it’s too early to spot the trend but we’ve seen a trend for shorter distances stage races and this is set to continue in 2014.

Finally just counting the race days and distance is a fraction of a cyclist’s season. There’s plenty more to add in training days especially as some like Voeckler and Gilbert are infamous for riding almost every day of the year. But then there’s the gym sessions – Timmer was lifting iron in the Argos-Shimano pre-season training camp in Spain – and more, all assuming a rider has no injury. On top of all of this you can add travel time, the hours spent in airports and more, ask Manuele Mori, the table’s number two above who started his season in Australia and finished with the Japan Cup, 98 days of racing of which only seven in Italy. He’s been away so much you wonder if he gets lost when training back home.