Thanks to Prendas Ciclismo

Every sponsor of this site gets a note of thanks and now it’s time to say thanks to Prendas Ciclismo who have been sponsoring during the Vuelta and the World Championships.

The British bike shop specialise in clothing and seem to have special talent of laying their hands on retro items. Prendas are also sellers of the Cycling Anthology, if you want to buy the third volume of the book due out soon, think about giving them your money rather than large online retailers named after Brazilian rivers. If you haven’t dealt with them before, you’ll find Mick and Andy very helpful and personable. 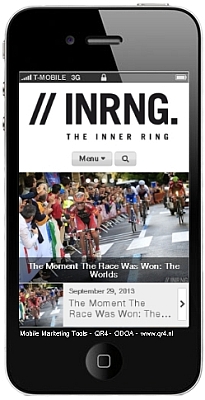 Smartphone Upgrade
A housekeeping note to say a share of the funds has gone on upgrading the website for readers with smartphones. There are more and more readers these days and an increasing share come via mobile devices. The new design looks better and should showcase the pictures more.

This happened on Saturday and promptly crashed the website. The site had been backed up and I asked the hosting company to restore the backup… and they uploaded someone else’s website. This explains why for a few hours this site was selling ABC Children’s books.

After Saturday’s blip I know the upgrade has changed the comments section for smartphone users, they are no longer “nested”, meaning replies are placed on chronological order rather than conversational order. Hopefully this can be fixed, the software menu page doesn’t allow for this but I’m working on it.

Advertise on inrng.com
Finally if you or your business would like to advertise on here in the coming months, drop me an email.

Previous post: The Moment The Race Was Won: The Worlds