The Jerseys of the Vuelta a España 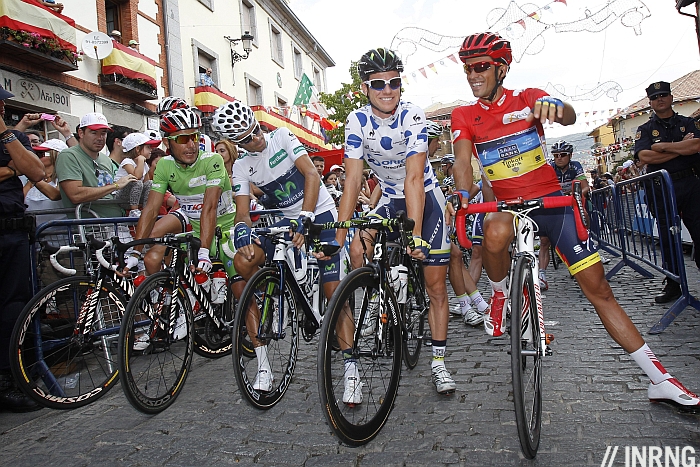 There are four jerseys in the Vuelta a España: red, green, blue polka dot and white. Unlike the Tour which has been trying to engineer the points allocation to provide distinct winners the Vuelta sees a big correlation where the leader in one competition is likely to be leading another competition and possibly all four at the same time.

As well as the jerseys, here’s a look at the cash prizes available in the race.

Red: the maillot rojo is awarded to the overall leader. It was orange when the Vuelta was launched in 1935 and switched to white for a year in 1941 but went back to orange. In 1955 race organisers switched it yellow, borrowing from the notoriety of the Tour de France and it stayed yellow until 1999 with one orange exception in 1977. In more recent times it has been gold but in 2010 red jersey was adopted. It is sponsored by Carrefour, a French supermarket.

The Vuelta offers time bonuses with 10 seconds for a stage winner, 6 seconds for second place and 4 seconds for third place. Each intermediate sprint offers 6-4-2 seconds as well.

Green: the points jersey but not necessarily the property of the sprinters. Points are awarded at the finish line and at intermediate points in the stage and the rider with the most points wears the jersey.

Note that unlike the Tour de France, an equal amount of points are awarded in the mountains as on the flat. With the high number of summit finishes it means there’s a correlation between the overall classification and the points jersey. There’s a good example from 2012 when sprinter John Degenkolb won five stages but only finished fourth in the points competition with Alejandro Valverde well ahead. It is sponsored by a government recycling agency.

Polka dot: also known as the “King of the Mountains” jersey, this is similar to the Tour de France jersey, only with blue dots. Points are awarded at the top of categorised climbs and mountain passes. Whilst the Tour has five categories going from 4th cat climb to hors catégorie the Vuelta sticks to three categories. However there are exceptions where summit finishes offer more points. Also, like the Giro’s Cima Coppa prize, the highest climb of the Vuelta sees extra points awarded and the Cima Alberto Fernandez prize. This will be the Port d’Envalira which might be the highest climb but it’s not the hardest of the Vuelta being a large and wide road and a major transport artery for the principality of Andorra. It is sponsored by Loterías y Apuestas del Estado, the Spanish state lottery.

White: Tour connoisseurs should not confuse this with the white jersey from July. Instead this is for the “combined classification” and is awarded to the rider with the best position in all three of the above classifications: overall, mountains and points. It is calculated by the ranking in each classification. For example a rider who is 3rd overall, 5th on points and 8th on mountains has 16 points (3+5+8=16) and a rider 9th on GC, 4th on points and 2rd in the mountains has 15 points (9+4+2=15) and the rider with the lowest score wins. It is sponsored by Fertibibera, an agricultural products company.

Note there’s no best young rider competition and UCI rules limit a stage race to four jerseys in order to avoid confusing the public with too many in-race competitions.

The Jerseys and The Racing
The Tour de France agonises over the allocation of points for its green and polka dot jerseys. There’s a tension between rewarding the points jersey to the fastest sprinter and the best points gather, if only because folklore insists green is for sprinters. Similarly the mountains competition has seen many points changes to alter the outcome with summit finishes getting big rewards in a bid to thwart plucky raiders and instead reward the more obvious climbers.

But the Vuelta is less concerned with trying to engineer the outcomes. Again 2012 offers a good example where Alejandro Valverde finished second overall, won the points jersey and this helped him win the combined jersey too. In other words the racing should see riders aiming for stage wins and the overall classification rather than trying to bag a particular jersey.

Other Prizes
There’s also a daily “most combative” prize awarded every day to the rider who has attacked the most or tried the hardest. A subjective prize, it is awarded by a jury instead of using points.

There’s also the team general classification which is calculated on the basis of the sum of the three best individual times from each team in each stage ridden. For example if Riders A, B and C are a team’s best finishers on a stage, their times are added together for team’s overall standing. The next day Riders X, Y and Z are the best finishers and their cumulative time for the stage is added to the team’s time for the previous stage. In other words it’s not based on a team’s best three riders on GC but best three of a team each day.