For all the red ink above this is not a mountain stage, the climbs along the way are steady pace and we should get the first bunch sprint of the Vuelta. Without any big name sprinters in the race the prize of a stage win is there for the taking.

Meanwhile Vincenzo Nibali is back in the overall lead normally something to celebrate but almost a burden given the duties it imposes.

Stage 4 Review
Perhaps the Mirador de Ezaro was too far from the finish. It’s a special climb, the kind that makes the Mur de Huy seem short and straight and is building its own reputation. But with 35km to go the bunch had time to regroup. On the drag to the line Dani Moreno got the jump on everyone. The Katusha rider excels in uphill finishes and on paper this looked a little to easy for him but it worked to perfection. 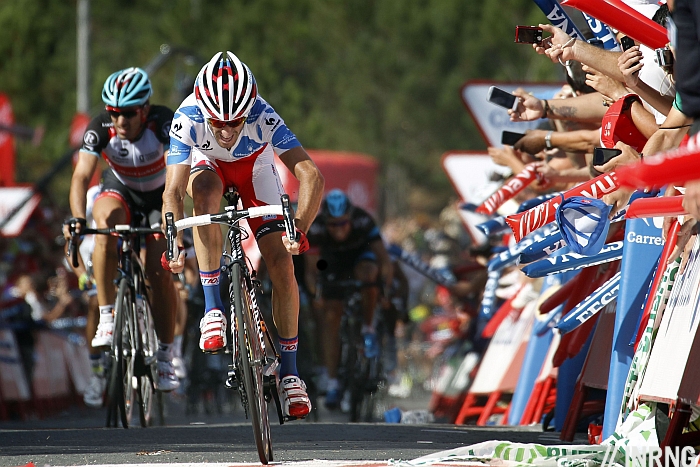 Losers of the day were Radioshack-Leopard. Fabian Cancellara tried to get across to Moreno but it didn’t work and behind, Chris Horner was caught in a split. It wasn’t a catastrophe, just racing. And besides, the team has bigger problems with Flavio Becca refusing to fund the team’s presence outside the obligatory World Tour events. Astana recover the overall lead with Vincenzo Nibali but they might not be overjoyed with this as several sprint stages approach and it means the team has to, nominally least, defend the red jersey. Nibali will also spend time each day in post-stage press conferences and doing TV work.

The Route: a Sôber start before the race heads out to the vineyards. The first climb of the day is the Alto do Covelo, long at 10.9km but a gentle 4%. There’s more climbing along the way before the Alto do Padornello, 11 km at just 2.6%. Despite the soft gradients there’s still about 2,500m of vertical gain.

The Finish: there’s a steady approach through Sanabria and to the lake where the road rises and falls in places. Hilly is too strong a word but it’s not flat either. Rolling. In the final kilometre there’s a right hand bend with 600m to go and then race heads for the line.

The Scenario: there’s a high chance of a sprint finish. Several teams have brought sprinters to the race and without the likes of Mark Cavendish, André Greipel or Marcel Kittel the teams will each fancy their chances and work to chase down any breakaways.

Who to pick? I’ll go back to what I wrote the other day… Orica-Greenedge’s Leigh Howard can have his day and Vacansoleil-DCM’s Barry Markus has been in the top three several times this year, challenging the likes of Mark Cavendish at times. Tyler Farrar’s victory celebrations are rare these days but he’s been looking sharp in recent races and the freckled fastman could find himself the best of the lot. Argos-Shimano bring two prospects with Reinardt Janse Van Rensburg and Nikias Arndt who are worth watching not necessarily for results but to see how they learn their trade. Edvald Boasson Hagen, Gianni Meersman and Michael Matthews prefer hillier days so they’re safer bets today. Lampre-Merida’s Richeze is fast too.

Weather: sunny and mild and with the wind dropping off as the race leaves the coast.

TV: coverage starts at 4.00pm Euro time with the finish expected around 5.45pm. Check-in to see if there’s a surprise along the way but otherwise the action should be condensed to the final 10km.