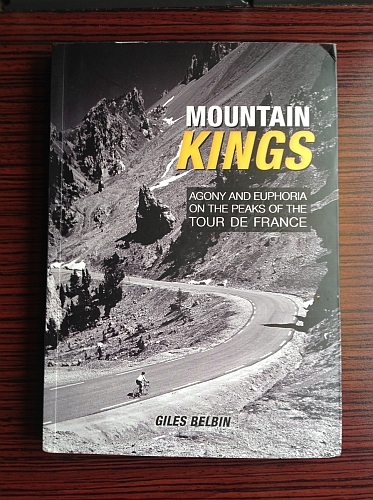 “Mountain Kings, Agony and Euphoria on the Peaks of the Tour de France” by Giles Belbin

How hard are the mountains? The mere mention of names like Galibier or Tourmalet can be enough to evoke fear, mystery and for the fortunate, memories. In this book Giles Belbin sets out to try many of the Tour de France’s most famous climbs and relate the experience, both his effort to climb them but also what has made them so famous over the years.

At first glance the book is similar to Daniel Friebe’s Mountain High with each climb listed along with profile and the trigonometry of altitude, length and gradient as well as rich photographs. However this is more a series of personal accounts of each climb rather than a presentation of the road itself and there are many rider biographies included.

The personal account is obvious at times, for example Belbin tackles Luz Ardiden but there are no views of the mountains, just clouds and rain. His experience is real. Drawn by their notoriety when for one day a year they become a sports venue, Belbin sees the roads and mountains as they are for the rest of the year. Ski lifts hang redundantly, farmers work and drivers pose for photos at the top, curiously proud at their motoring efforts. 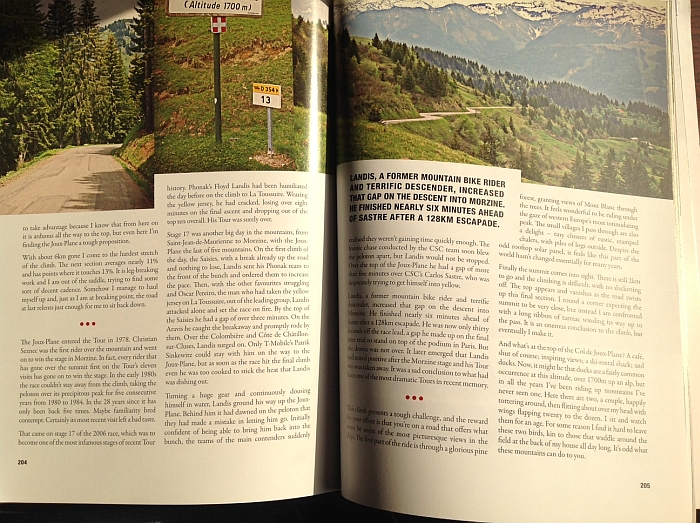 When it arrived during the Tour de France I took a quick flick and had this as a travel book, one man’s attempt to climb many of the Tour de France’s most well-known climb. But it’s equally a history book with two methods:

One thing to applaud is that a lot of the history is well researched. It can be easy to pick up the tales that have become mythical over time but which have become gross exaggerations. So when Belbin recounts the story of Eugène Christophe, his forks and the Tourmalet he gets it all right (remember, some say Christophe was disqualified from the race after getting a boy to work the bellows in a forge so he could repair his bike but he only got a short time penalty, instead he lost the race because he tried to hide his broken forks).

If anything the personal accounts of the climbs are short despite his long climbs. Belbin is an irregular cyclist who is happiest riding in the Alps but a lack of riding throughout the year means he’s limited to tackling each climb one by one and preferably parking or even staying the night as close to the foot of every climb possible. You can salute the logistics to treat each climb one by one and it presumably means he’s taking two hours to ride up the likes of Mont Ventoux and Alpe d’Huez rather than the significant but still brief effort required for the racer, cyclo or club cyclist. But the brevity of his accounts is fine, it saves expanding the theme of “I suffered like a dog” for climb after climb, page after page because whilst each mountain pass has its special points, there’s more that unites them for example a tarmac road that’s usually between 7-9%.

One consistent theme is the endurance and pain, the idea of climbing a mountain pass when all around are are doing more sensible things. Here is his take on Samoëns at the foot of the dreaded Joux Plane:

“The town has an air of muted contentment. The sun is shining, there’s a cooling breeze, people are smiling and chatting. Everything is very pleasant indeed. Yes, it is going to be a lovely day in Samoëns. Pity I won’t be here to enjoy it.”

One personal touch is the photography. The images are rich and enhanced, think of an Instagram picture with a polarized filter. But the details are good, a milestone here or the potagers, the small vegetable plots that line the start of the Col de la République on the way out of St Etienne.

Perhaps the last word should go to an anonymous Australian tour guide. Belbin is winching himself up another road and spots the guide leaning out of the window of a support vehicle to comfort a client struggling on Mont Ventoux. The rider is apologetic and presumably enduring their own private hell, all whilst ashamed at being the slowest of the group. But the guide has seen it before:

“It’s not about the speed or the time or keeping up with the others. It’s about your own journey.”

Summary
If you have ridden in the Pyrenees or Alps, there’s a good chance the Tour de France influenced the decision. There are great roads in Austria and Switzerland but few dream about the wonderful Furka or the Großglockner passes because they’ve not entered the sport’s mythology.

Belbin’s personal voyage is a means to explore the roads and then discovery their history with the emphasis on story. Via anecdotes and tales this is handy guide to the mountains but also an easy entry point into the sport’s past thanks to its concise and well-researched entries.

You can read a sample of the book here:

Disclaimer: this copy was sent free for review