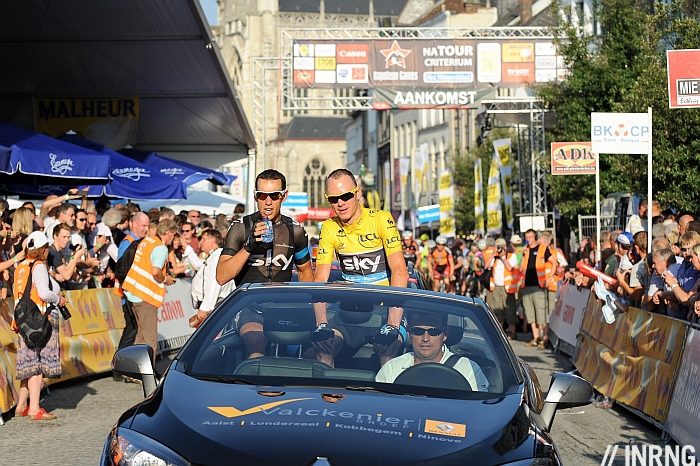 With the Tour de France over the post-Tour criterium season begins. These are exhibition races put on by entrepreneurial race organisers who seek to capitalise on the high profile of the sport following July. Riders are invited to take part in these races and the stars of the Tour de France command big appearance fees, some can collect €50,000. Not bad for an evening’s work.

History
These races have a rich history. For a long time they were an essential part of a rider’s income, for decades the stars of the peloton did not earn much money from either salary nor prize money and instead these criteriums and the cash appearance fees formed a big part of a rider’s income. The public would flock to the races because even those who were lucky enough to see the Tour de France ride past in July only caught a glimpse of the champions, a criterium meant repeated laps of a circuit where the crowd could see the riders up close again and again, especially in the days of early television coverage.

Money
It was also a form a patronage where a star rider would insist that lesser riders take part and collect appearance money, often earning vital income. These invitee riders could be team mates but also others who’d done a good turn in the Tour de France. There are fewer races today but in times past a rider who had a good Tour de France could spend weeks on the road, driving from one event to the next with their bike and a change of clothes. Today the number of events is drying up. We’re a long way from the days when champion cyclists could pack out a velodrome, the post-Tour criteriums don’t hold the same appeal either. People can see the show on TV, appearance fees are subject to wrangling and some teams don’t want their riders to take part, for example Movistar have blocked Nairo Quintana. But there are still many races and last night’s Aaslt criterium in Belgium looks popular.

The economics means a captive crowd pays for tickets to enter the circuit or a race gets intensive local sponsorship, often hundreds of small shops who each chip in €50 in return for a symbolic advert in race programme as well as more money from the municipality – the mayor gets a photo op with the champ – as well as corporate sponsors. There’s a circular logic where a race that attracts more stars will attract more people and therefore more sponsorship which allows more stars to be hired for the evening.

The Rules
In the past these have been unofficial races but most are now registered on the UCI calendar because pros are supposedly forbidden from riding wildcat races. Despite the UCI registration it’s all a show. No teams take part, just riders on an individual basis. There’s no support either, riders make their own way to the race and take the bike out of the back of a the car and pump up the tires themselves.

The link to the Tour is obvious, no more than when riders who wore distinctive jerseys from the Tour de France wear them. For example Chris Froome sported his sequinned yellow jersey from Paris last night. Other riders who have done well in the Tour are also in demand, for example in Belgium we can imagine Jan Bakelants is in demand while in France Christophe Riblon is a draw. Sometimes locals amateurs take part too, helping to swell the ranks on the cheap and provide some regional flavour.

The format is simple, a short loop in town that allows the spectators to see the riders pass by many times, usually over an hour. There will be amateur races before plus some other exhibition events, maybe a race of retired riders. There’s often a victory lap and maybe some other event, a beer festival or a music concert too.

1-2-3
These “races” are normally fixed, the result is determined by the riders in concert with the organiser. The public have come to see a show and they’ll see some famous riders attacking before the big names dispute the finish. Here you’ll often see a climber out-sprint the sprinters, all in the name of a “dramatic” result. The unspoken rule is that the local rider never wins because this would be too obvious.

It’s not as wrong as you think, imagine if you went to see a race and the regional kermesse lord chopped the Tour de France winner on the final bend to grab the win, this lèse-majesté would disappoint and undermine the sport’s hierarchy. Just because it’s fixed doesn’t mean it’s not fast, after all the show looks even better when riders hit 50km/h and if it’s not ideal training, it’s still a workout but hardest part is the travel and being forced into taking snack food on the go.

The best laid plans
In the late 1970s one amateur thwarted the pros. This rider was so strong he was hurting the pros. Frustrated at the strong riding the pros had words and decided to gang up on the amateur but the rookie hit back, dropping them. His name? Bernard Hinault, a future five time Tour de France winner.

All year
It’s criterium season now but they’re not exclusive to late July. You’ll find races throughout the season in France, Belgium and beyond.

More
Cycle Sport Mag have a good piece about a “Day In the Life” of Robbie McEwen from 2011.

Previous post: The Moment The Race Was Won: The Tour de France