Stage 3 takes the riders away from the Alps but the cols keep on coming although the monts of the Beaujolais are gentle and should suit the sprinters. But a tricky finish awaits, a downhill run into town and then some sharp bends all the way to the finish. 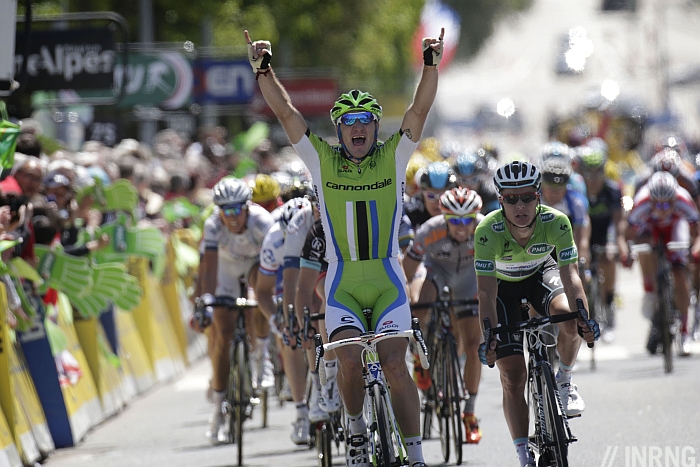 Stage 2 Wrap: congratulations to Elia Viviani of the Cannondale team. A fine win against the odds but his triumph will be squeezed out in his home country and beyond by the news of Mauro Santambrogio’s A-sample for EPO.

I thought Viviani might win a stage of the Giro but never imagined him winning in the Dauphiné as Stage 2 looked to be too hilly. Riders were being dropped on the final climbs, with Nacer Bouhanni just cracking before the top of the final climb. If the biggest surprise goes to third place Tony Gallopin as the Radioshack rider confessed to not even knowing Viviani was in the race, “I didn’t check the startlist” he said after the stage. Presumably completing the Giro did Viviani plenty of good but he also profited from Gianni Meerman’s early sprint, a stiff headwind on the finish line allowed the Italian to come round just when it mattered.

The Route: a flat start, indeed the route skirts the location of Stage 4’s time trial as it heads west. The feedzone is the kind of place where they should have trestle-tables dressed with tableclothes to serve up local food like Bresse chicken and some of the finest French wines from the Morgon and Juliénas wine areas.

Alas, the riders will get a bag with energy food but no bad thing as the climbing starts with the Col des Echarmeaux. Listed as a 10.6 km climb at 3 % it’s really just a long valley road that drags up, but the middle is 5%-6% at times. The Col des Sauvages is the same, 4.0 km climb a 5-6%, it’s all regular, the kind of road where the bunch can charge along in pursuit of any rogue attacks. It is then followed by a fast descent with a few corners but nothing too technical.

The Finish: the race speeds into Tarare and is downhill almost to the line there are two sharp left turns in the final kilometre meaning positioning is vital, especially as the final corner is just 350 metres from the finish. Here’s the map… 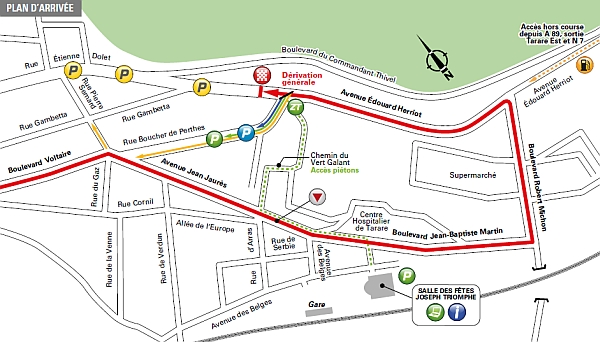 The Scenario: breakaway or sprint? Europcar spent much of Stage 2 working on the front to control the breakaway and they are likely to repeat this in order to defend Davide Veilleux’s yellow jersey. So we should get a similar format where Europcar rent out their riders to drive the chase and then others take over for the last two hours. Given the sprint chances this stage offers we can expect OPQS, FDJ and Cannondale being only too willing to take up the slack. The climbs are not hard and a well-protected sprinter can get towed along in the slipstream.

In a straight line Elia Viviani is the fastest but there’s no straight line so I’d imagine a contest between him and Nacer Bouhanni. It might be third time lucky for Gianni Meersman but the Belgian seems to prefer hillier stages, this might not be selective enough, perhaps OPQS have to force the pace on the final climb rather than the last kilometre? But the lack of sprinters in the race this year – because of the lack of sprint stages – means other fastmen are trying their chance so watch for Reinardt Janse Van Rensburg of Argos-Shimano and Radioshack’s Tony Gallopin in what could be a chaotic sprint with a fight for the last corner.

TV: the same as usual, don’t be caught out by the early finish for 2.45pm. cyclingfans.com and steephill.tv have the links to video streams if you can’t get it on TV.

Weather: a pleasant and sunny day if a little on the cool side for June with temperatures reaching 18°C (64°F) with a light breeze from the north-east

Local Rider: Cofidis’s Rudy Molard was in the breakaway for Stage 2 but he’s the local for Stage 3 coming from Villefranche-sur-Saône to the north of Tarare. The young French rider was a promising member of France’s U-23 team in 2011 and turned pro for 2012 but was hit by mononucleosis in his first year. Update: he’s obviously happy to ride hom

Deindustrialization Tour: another day, another town with an industrial past and high rate of unemployment today. We had Oyonnax and plastics on the previous stage, now here is Tarare and its textiles. It was once the centre of speciality textiles in France – in the 1950s it produced 80% of the curtains used in France – as well as a large producer of velvet and even plush toys. But it has struggled to cope with factory closures although it retains a pleasant vibe. The stage offers a contrast, passing fine wines that command premium prices around the world whilst finishing in a town with many a crumbling factory. The local microbrewery, Ninkasi, is going from strenght to strength. It’s named after the goddess of beer apparently.