Listed as a flat stage by the race, Monday’s 191km routeis harder than it looks with the last 60km loaded with climbing, twisting roads and even a forest track before a downhill rush to the finish in the town of Oyonnax.

The town was once home to Bollé, the sunglasses company and is the setting for one of the few well-regarded literary works to feature a bicycle race so tacked onto the stage preview is a quick look at Oyonnax and Roger Vailland’s 325,000 francs. 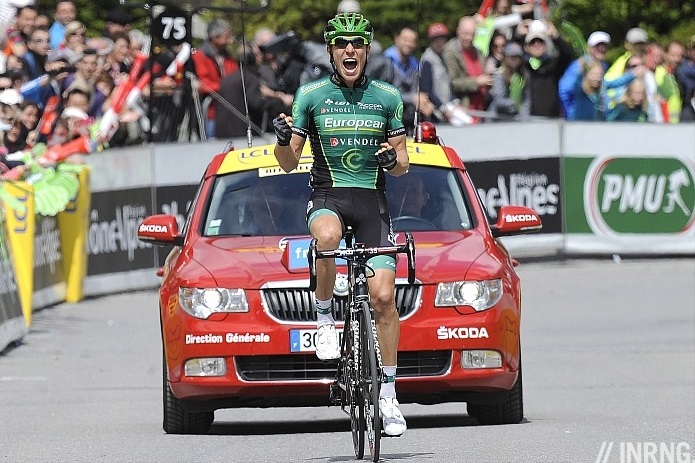 Stage 1 Wrap: well done to David Veilleux. It looked like the early breakaway would be allowed to stay away for the first two climbs and collect some mountain points. It looked like Veilleux was going solo for the mountain points and would be caught. It looked like the time checks were wrong as Veilleux’s solo advantage held whilst Movistar and Katusha chashed. But we saw Veilleux stay away for a big win, taking the stage, the overall lead as well as the points jersey and the mountain jersey too. He only missed out on the white jersey because he’s five weeks too old to qualify for the young rider competition.

It turned out well for Le Caribou, his nickname on the Europcar team. He’s got a diploma in mechanical engineering but seems to have skipped the bio-mechanical classes judging by his forceful pedalling style accompanied by a rocking motion. Veilleux was “only” signed by Europcar because Canadian clothing sponsor Louis Garneau wanted a Canadian on the team. Don’t read this the wrong way, he wasn’t signed after a short quest to find a Canadian with a bicycle and some free time. No, he was recommended but all the same the deal happened because of the Canadian clothing sponsor.

If Veilleux surprised in a good way, note several riders had a bad day. Despite claims of fitness and losing weight Thor Hushovd was dropped on the Col du Corbier but more surprisingly so was Thomas de Gendt… perhaps losing time so he can go on a breakaway but complaining of a high heart rate. Andrew Talansky is getting over stomach flu but couldn’t get over the final climb with the peloton although Rohan Dennis’s ride gives the Garmin-Sharp some cheer.

The Route: there are two parts to the stage. First up, a gradual procession away from the Alps as the race leaves behind the ski resorts. The Côte de Mornex has a steep ramp but poses no problem. But as the profile shows the race climbs up for some time after the KoM point and in time there’s a long descent.

Everything changes after 130km when the second part starts. The race crosses the Rhone river in Bellegarde. The profile shows the Côte de Lancrans which is followed more climbing, a short descent and then more climbing to the feedzone before the Côte de Communal which, with a tunnel at the top, climbs above 1000m. So plenty of vertical metres but with more to come.

Unlike the ski station roads found in the rest of the race, this is the wild terrain of the Jura mountains familiar to the Tour de l’Ain race every August. Instead of tourist coaches these are roads used by tractors and logging trucks whose granular road surfaces get ravaged by winter. Indeed the road after the Côte du Bugnon seems to be an unclassified forestry road and could reserve a surprise. The final Col du Sentier is second category label looks odd being only 2.7km at 7.6%. But don’t fixate on the labels, instead it’s the succession of climbs, descents and twisting roads in the final 60km that define the stage, an air of Liège-Bastogne-Liège with the wooded climbs.

The Finish: a fast descent, the kind where there are blind bends meaning riders cannot see round but without too many sharp corners so ideal for the fearless or well-informed rider. It’s downhill all the way into town and flattens out for the final two kilometres although with a railway bridge to cross. There’s a U-turn with 600 metres to go, it’s not sharp but enough to slow some riders. After it is flat all the way to the line.

The Scenario: a break could go early but Europcar should chase to protect Veilleux’s lead, capping any advantage and then letting the other teams take over the duty for the final third of the stage. Although as described above the roads don’t lend themselves to a regular chase. And with 50 riders already 10 minutes down on GC, there’s a lot of riders who pose no threat to anyone so a break could stick if the chemistry is right.

Tony Martin’s attack yesterday wasn’t planned but it meant OPQS didn’t join in the chase to bring back Veilleux. I’m not sure if they’d have done it but the point here is that Gianni Meersman won the bunch sprint by a few lengths. The question is whether he can cope with the hilly finish into Oyonnax. You’d think yes but if not then Tom Jelte Slagter is a pick to cope with the climbs even if the finish line run is flat. Better-suited is Tony Gallopin (Radioshack), the Frenchman got squeezed in the final corner but could come good today.

But the final climbs could see the bunch strung out and the Col du Sentier is a good launchpad, it’s short but with a twisting descent most of the way to the finish line, an attack on this climb could be hard to chase. Think of an aggressive rider who can speed downhill and names like.Samuel Sanchez, Chris Le Mevel or Wout Poels come to mind but there are more. If you want an outsider, why not FDJ’s Artur Vichot or Argos-Shimano’s Warren Barguil?

TV: despite talk of live coverage on various TV channels, it’s not as easy to find as promised. So check Eurosport where you live but if not cyclingfans.com and steephill.tv will serve you an internet feed starting soon after 1.00pm Euro time. The stage is scheduled to finish around 2.45 pm but could be earlier or later.

Weather: a pleasant day… for March. Temperatures will reach 16°C (60°F) with a some sunshine and clouds. A breeze from the north-east means a tailwind for the early part of the race and then a headwind for parts of the finish but at 25km/h max it shouldn’t change the race much.

Stereo coverage: note the Dauphiné stage previews will also appear on the C-Cycling website and in return the sharp forecaster Mikkel Conde will be supplying previews for the Tour de Suisse for here.

Oyonnax: the stage finish is famous for its plastics. For centuries local craftsmen made combs and other small objects from the hardy boxwood growing in mountains nearby. Its fine grain and high density make it ideal for carving. With mills powered by the local river Oyonnax became famous for its wooden exports and was granted a royal monopoly for the production of combs.

But one day, long before Mr Guire and The Graduate, the town adopted one word: plastics. Almost overnight the town swapped boxwood and chisels for celluloid and the injection mould. Combs, sunglasses and other plastic items were produced, today we might think it sounds cheap but these were futuristic at the time. Several famous companies started here, including eyewear company Bollé who sponsor Orica-Greenedge today. But think of plastics today and you probably think of China. Bollé got bought by a US firm and it shut the French factory in 2005, moving production to China and mirroring the fate of so many other companies and factories.

Book Review: literature and cycling rare mix. Ernest Hemingway mentions a bike race once or twice but apart from specialist books like The Rider, there are not many that have cycle sport as the backdrop and even fewer are any good.

But example is Roger Vailland’s 325,000 francs from the 1950s. It’s in French so it’s not for the list of book reviews but worth a mention and the Dauphiné is the cue. The first three words are “Le circuit cycliste” meaning, for this reader at least, starting the book is like sinking into a warm bath.

Vaillant was a writer, indeed he seems to have covered regional bike races for extra cash. In this novel he tells the tale of Oyonnax and Bernard Busard, a man who rejects the toil of the plastics factories. Instead he – as his surname of “Buzzard” suggests – lives a marginal life, earning cash delivering goods by bike from which he discovers a passion for cycling. He decides to make his fortune winning bike races and aims for a local race held in the mountains around Oyonnax, a springboard to a pro career as the winner has often gone on to shine in the Tour de France. But along the way he meets Marie-Jeanne and she’ll only marry him if he can find financial stability. Leading the big race he crashes twice, proving that it’s no way to earn a living.

Instead he decides to open a roadside service station and café, in those days a futuristic plan to service the rise of the motorcar. To get the deposit of 325,000 francs he decides to work in the plastics factories he once refused. Only he takes on a Faustian bargain, agreeing to work only for six months but at a cadence more infernal than any bike race. He works day and night, doping with amphetamines to match the constant rhythm of the industrial press. To increase his productivity yet more more he removes the safety grill on the press so he can insert the plastic forms into the mould faster and earn yet per hour. Only just like the bike race, fatigue gets to him and his arm is crushed by the giant industrial machine.

Vaillant was a communist and the themes are obvious: Busard gives up his dreams and the freedom of the road to work in a factory and becomes consumed by the quest for money, swapping health, sport and romance for a concrete service station and a marriage whose first condition is financial and surrendering a limb in his bid to make the money. As such the theme is more about industrial change rather than cycling, the opening words don’t mean the whole book is about racing. Finally if you’re French is ok note Vaillant’s economical style makes it a relatively light and easy read.