The final mountain stage of the Giro sees a revised route but the summit finish of the Tre Cime di Lavaredo remains… for now but the weather forecast does not look good.

Snow, mist and icy temperatures remain and if the route is flatter it will still be a challenge, after it’s 210km and finishes on a very tough climb. Vincenzo Nibali has a firm hold on the race but the cold can do anything. But if the Italian copes, others might not.

The Route: gone are the early climbs and the tough Passo Giau instead there big wide valley roads of the Valle Isarco await rather than any peaks and towns like Chiusa are wide open for the race to speed through on the way to Bressanone or Brixen, the birthplace of mountaineer Reinhold Messner who might inspire some solo attempts later.

The race climbs the Passo Cimabanche, it’s not marked on the profile, presumably because it’s only 2%. But it all adds up before the cold descent to the ski resort of Cortina d’Ampezzo. 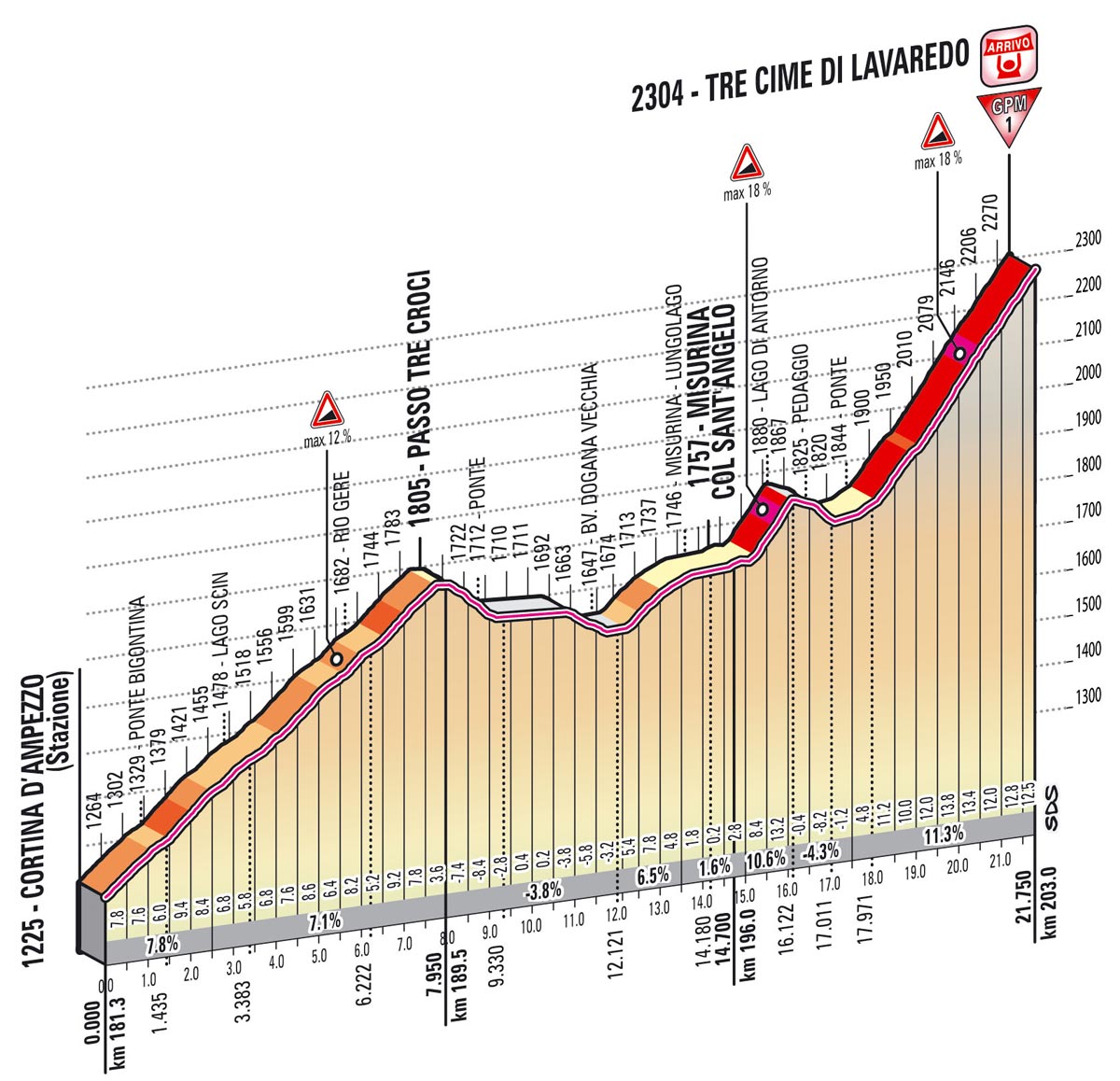 The Finish: three is the magic number as the final climb is really three separate climbs.

All together it makes for a very tough climb on any day but with 200km in the legs and cold weather this will be brutal even if the earlier climbs of the day have been removed.

Weather: rain, snow and low cloud with the thermometer stuck in between 1°-5°C (33-40°F) and the finish will be sub-zero. Cold or wet are bad at any time but the combination for 200km are a lot to ask of the race but this time riders know if they can just make it to Cortina then they’re almost at the finish line of the Giro.

I think it’s more likely the stage goes ahead as even if it’s snowing a race can proceed uphill… although note the final has some descents on the way to the top. So it’s far from certain stage happens in full either.

The Scenario: some might have struggled with the enforced rest day but most will have found it ideal to spin the legs after the forceful effort of a mountain time trial. Vincenzo Nibali was so strong in this stage that he’s clearly got the power to ride away from everyone if he wants, he’s got a jump and an acceleration. So even if it looks like a white Christmas why gift the stage to anyone?

But today is the last chance to win anything given tomorrow is a sprint finish and that implies Mark Cavendish by default. Thanks to Cavendish taking four stages and Movistar winning four, the following teams have yet to win a stage: Ag2r La Mondiale, Androni Giocattoli, Blanco, BMC Racing, Cannondale, Euskaltel-Euskadi, FDJ, Lampre-Merida, Orica-GreenEdge, Radioshack-Leopard, Saxo-Tinkoff and Vacansoleil-DCM. Expect riders from these teams to flood the early breakaway.

There’s a chance the breakaway stays away. With Nibali in a comfortable position Astana don’t need to reel in any move, if anything it’s down to the other teams like Lampre, Movistar or Vini Fantini to do the work to defend the positions of their riders. With a move up the road Nibali can’t fight for the stage wins but others will want to take time. Rigoberto Uran will surely try to test Evans to see if his weakness on Thursday is still present and Michele Scarponi can get on the podium if these two lock horns and he profits. Carlos Betancur and Rafał Majka can duel for the white jersey and a higher overall place whilst Samuel Sanchez is hauling himself up the overall.

TV: there will be live video from 2.30pm Euro time until the finish. But the weather could hamper the transmission as it did on Stage 14 to Bardonnechia. The finish is expected for 5.15pm but tune in for the last hour to catch the final climb.

Word of the Day: Cima meaning summit or peak. The Tre Cime (plural of cima) feature whilst the Cima Coppi prize will be awarded at the summit finish, the special prize for the high point of the 2013 Giro that comes with double mountains points… but Bardiani-CSF’s Stefano Pirazzi has an unassailable grip on the jersey.