The final stage of the Giro should be a procession and celebration but it’s almost 200km long meaning it won’t be a simple victory parade.

If the overall result won’t change there’s still a show to put on and a final sprint where Mark Cavendish can win the stage and take the red jersey off Vincenzo Nibali.

Yesterday’s Stage: a win by Vincenzo Nibali? Yes but this was the win. If he already won a mountain time trial, there’s something more satisfying about dropping your rivals on the way to the finish line. To borrow foreign words it was a capolavoro in Italian with plenty of panache. Another ride of the day could be Carlos Betancur, he had a mechanical before the final climb and it took a big effort just to get back to the lead group. Meanwhile Cadel Evans had a mechanical too which might have cost him second place, he seemed stuck in too big a gear and lost ground to Rigoberto Uran. But every rider who made the finish did well, climbing as the snow fell.

The Route: the riders start below Monte Grappa but will symbolically ride away from the mountains, heading west on the plains at the foot of the Alps. They skirt past Verona, home of Romeo and Juliet and then Lake Garda, one of the homes of Igor Makarov, the billionaire Russian oligarch behind the Katusha team, who bought one of the largest villas on the lake.

After 167km the race reaches Brescia where seven laps of a 4.2km circuit await in the city centre. 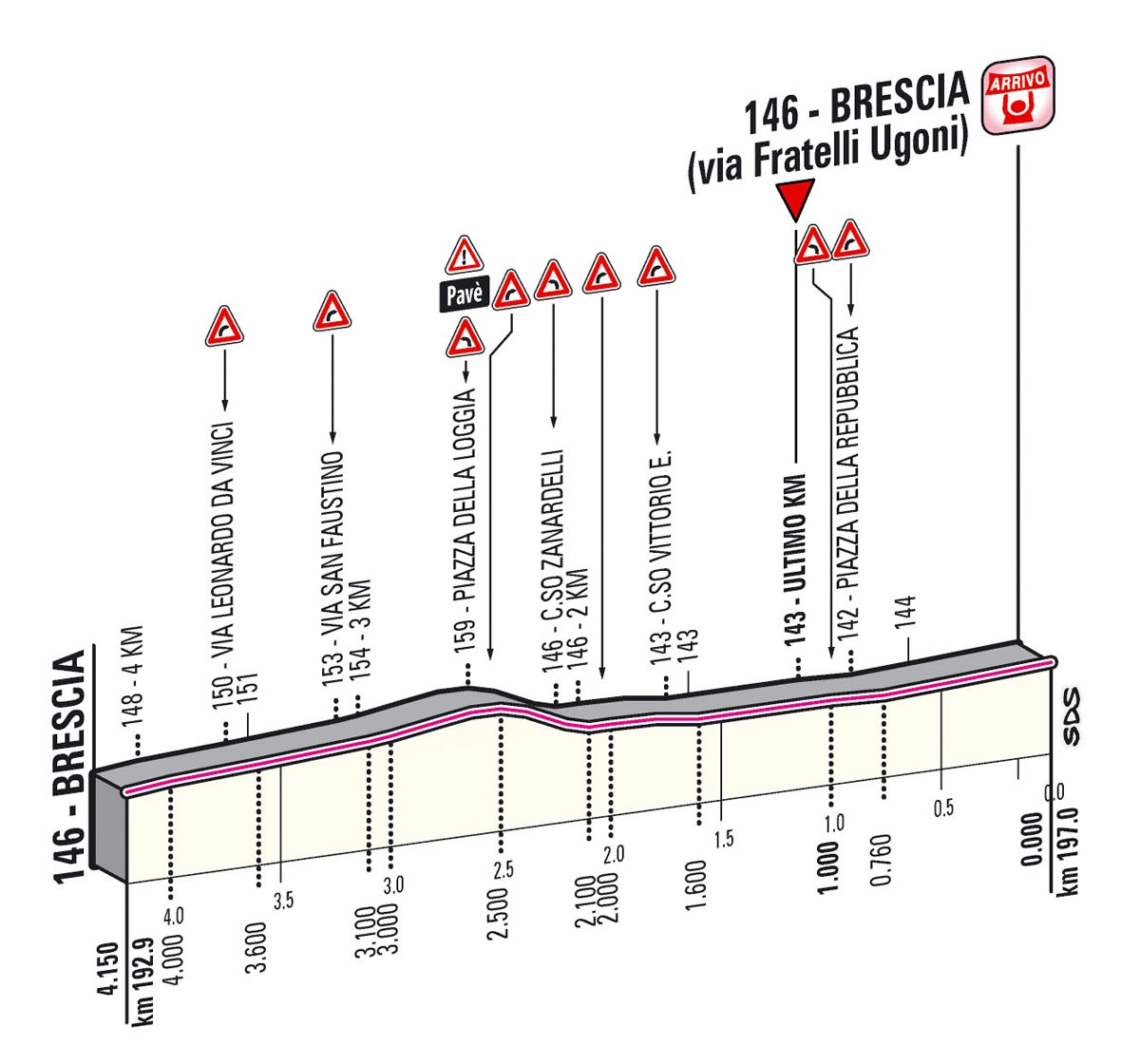 The Finish: flat but in the old city centre, the road laps much of the old walls of the city and the roads are wide although with a few pinch points and some pavé. But there are some sharp corners and the final kilometre has left hander followed by a right hander. This chicane will string out the field for the sprint.

The Scenario: a sprint and a win for Mark Cavendish? You’d not bet against it but we can expect Cannondale to help because Elia Viviani has come close to a stage win.

Fight for Red: an extra stage win for Cavendish almost feels excessive but he’ll take it of course. But rather than just adding another win he’s now in with a chance of winning the points jersey, a competition which he lost last year to Joaquim Rodriguez by just one point.

Nibali leads the red jersey points competition by 128 points with Cavendish on 117. Nibali won’t contest the sprints and this means Cavendish needs to collect 12 points which means finishing fifth or better in the finishing sprint. He can also top up with 8, 6, 4, 3, 2, 1 points at the two intermediate sprints for the first six riders.

TV: as ever the finish is expected for 5.15pm so tune in to watch the sprint finish. If you can’t find it on TV, cyclingfans.com and steephill.tv will cater for your internet feed.

Weather: the race leaves the mountains and the temperatures could reach 20°C (68°F), a pleasant change but still far below what would be expected for late May. It will be sunny at times but a 20km/h headwind could slow the riders a little.

Brescia’s 1000 Miles: the Giro was almost a race for motorcars but, skipping history, it became a bike race. But in 1926 Count Aymo Maggi came up with the idea of the Mille Miglia or the thousand miles and it became a famous car rally, at first a test of reliability and speed, today a trial of nostalgia and wealth as owners of classic cars roar they pride and joy around Italy.

In 1999 the cycling version arrived thanks to Fermo Rigamonti, in part inspired by the Race Across America ultra-cycling event. By car or bike the route is similar, one thousand miles or 1,600km heading in a clockwise loop via Ferrara, San Marino, Assisi, and then Rome before heading up the west coast of Italy to Florence, Florence and then Bologna before returning to Brescia.