Who Will Win The Giro? 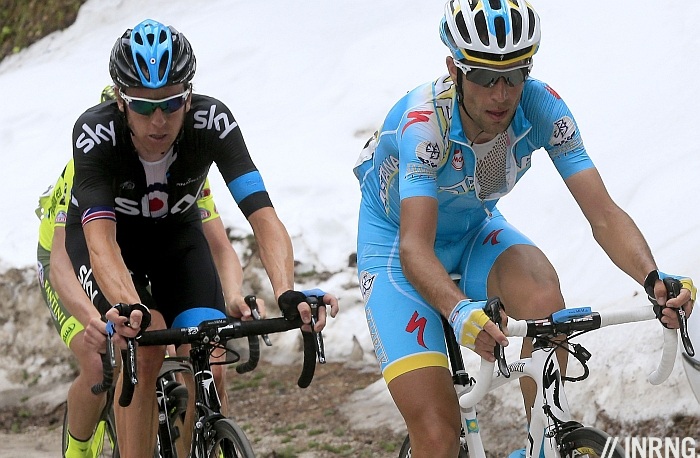 With the race four days away, time to run through the list of contenders for the race. Bradley Wiggins and Vincenzo Nibali appear to stand above the others but fortunately there’s no script.

One big difference this year is amount of foreign contenders. In recent years the Giro has looked like the Italian stage race championships but now riders are coming from as far as Canada, Britain and Australia to win the race.

First let’s remind ourselves of the route. A team time trial, one long flat time trial, an uphill time trial and then six summit finishes. The normal stages also come with time bonuses of 20-12-8 seconds for the top three each day.

The course and time bonuses can help our predictions but remember the best experts will struggle to pick the weather for this weekend. But the forecast suggests Sky vs the sky blue Astana.

Bradley Wiggins starts as the prime pick. Received wisdom says Wiggins won last year’s Tour de France thanks to the route’s long time trials and reduced climbing. But it should be remembered he put time into every rival in the mountains too. The Giro remains a different proposition but the stock phrase last summer was “we’ve trained for that” and Wiggins will have planned for the steeper slopes and practised sprinting for time bonuses. The Giro’s efforts are less linear, the strategy of riding at, say, 450W for a fixed period of time is harder with irregular slopes and the sprint for time bonuses… which is why Sky will be keen to let lesser riders go up the road to mop up the time bonuses and thus deprive Wiggins’s real GC rivals of time bonuses.

It also makes the team tactic of setting a tempo in the mountains harder. Certainly the benefits of sitting tight on the wheels is reduced when the speed drops on the double-digit gradients which means Sky’s mountain train tactic will be less effective. Indeed there’s talk Wiggins comes to the Giro with a weaker team. But Sir Bradley’s crusade requires a band of Knights Tempo suited to the high mountains, with the likes of Rigoberto Urán, Sergio Henao and Kanstantsin Siutsou.

In last year’s Tour the first time trial stage , 41.5km from Arc-et-Senans to Besançon, saw him put 2.07 into Vincenzo Nibali. Over 55km he could put three minutes into Nibali and more into the other climbers. Then it becomes a question of marshalling this lead over the mountains. Logic and arithmetic don’t work the Giro but for let’s try: three minutes over six mountain stages means surrendering 30 seconds per stage but with the time bonus it means this gap has to be even less.

But Wiggins is trading on his reputation. He’s been fifth in the Volta a Catalunya and fifth in the Giro del Trentino although technical problems disrupted this and as a result he will be on traditional mechanical gears for the Giro and not electronic gears.

Vincenzo Nibali is the next pick. To win he must be the all-Italian superhero, a sky-blue Maciste who climbs with the best, beats the clock and punches the pedals to win stages and time bonuses.

He’s had an ideal season so far with wins in Tirreno-Adriatico and the Giro del Trentino. In years past he’s won the Vuelta and finished third and second on the Giro. Nibali won’t calculate his race on Wiggins but it’s clear he’ll need to attack and sprint in the mountain stages in order to take back time lost during the time trial. By extension we can expect his Astana team to ride tempo to chase down breakaways so he can try to scoop the time bonuses. He’s a lively racer with a combative style. He’s focused on the Giro, there’s no talk about doing the Tour, only victory in Brescia counts.

Like any superhero Nibali has his weak spot. His is tactical, he’s prone to attacking too early in a race. It’s great to watch but often the audacity comes at a cost and he’s caught and dropped. Another is his relaxed style. An anecdote: he targeted the Tour de France in 2012 but never visited a single stage of the race and revealed he thought the first time trial was for teams rather than individuals until just a days to go. A move to Astana seems to have helped his relaxed indifference, he’s been training more on his time trial bike and working on his aero position. But it’s hard to imagine he’s become the total professional in the space of a few months.

Ryder Hesjedal is the defending champion. His win in 2012 was a surprise. He’d never won a stage race before, perhaps this meant rivals were willing to let him go on the road to Monte Cervinia, the move which let him take time on others? I kept thinking he’d crack in the final week as the climbs and time bonuses would suit Joaquim Rodriguez but in the end he held on tight enough to reclaim the lead in the final time trial. This year he won’t get such a free rein and the course is less suitable since he’s rarely in the top-10 for a time trial. A podium is possible… but I said this last year and he won. He comes with a strong team in his service with Peter Stetina and Christan Vande Velde notable helpers for the climbs.

Cadel Evans appeared on road cycling’s radar when he took the pink jersey in the 2002 Giro, an era when Eminem and Celine Dion topped the charts. Now 36 he wants to beat triple winner Fiorenzini Magni to become the race’s oldest winner. Experience counts for plenty and he’s coming into good form as his climbing showed in the Giro del Trentino. A good time trialler, he’s also a punchy rider capable of winning time bonuses. Seventh in the Tour last year when ill suggests if he’s fresh then he’ll still be a force but the BMC team look mixed, they still lack climbing power in support. Hard to see him winning but the podium’s quite possible.

Robert Gesink (Blanco) is another foreigner targeting this race. The “Condor of Varsseveld” can soar in the mountains and is better in the time trials than you’d think. But consistency is a problem for him as is rotten luck. Crashes, illness and other misfortune makes you think the likeable rider unwittingly ran over a box of black kittens some time ago on the family farm. But when things go well he’s an exciting rider with fifth place in the 2010 Tour de France to his credit. This will be his Giro debut.

Ivan Basso (Cannondale) will not start the race after a cyst, probably a saddlesore, prevents him from starting.

Michele Scarponi (Lampre-Merida) and Samuel Sanchez (Euskaltel-Euskadi) are two experienced climbers who will lose molto time in the time trial and then have to claw it back with attacks and stage wins in the final week. Scarponi is in form as his smooth riding in the Giro del Trentino and Liège showed. By contrast Sanchez hasn’t had the results this year and aged 35 the Giro. 15th in the Vuelta al Pais Vasco, 18th in Tirreno-Adriatico, a long mountain breakaway beckons.

Others to watch
One of the best things with the Giro is that it has a lot of open stages where any of the 207 girini can bring a surprise. A hilly stage or some bad weather can turn the race upside down. Here are a few names who could animate the race and alter the tactics of the main contenders.

Mauro Santambrogio (Vini Fantini) is in winning form and an easy pick for a stage win in the mountains. I’ve long liked the Vini Fantini team because of manager Luca Scinto’s simple ways but the fluo yellow is looking less bright these days as the team has recruited Danilo Di Luca and Stefano Garzelli, and both are in form. Matteo Rabottini took one of the best wins last year and will feature in the breakaways again.

Radioshack’s Robert Kišerlovski could impress. 10th in the 2010 Giro, he’s had his fair share of bad luck over the years, including crashing out of the Tour de France when tacks were dropped on the road. He’s in form and was strong in Romandie on the main mountain stage.

José Rujano is back with Vacansoleil-DCM. In 2010 he was the only rider who could stay with Alberto Contador in the mountains but he’s looking erratic this year, 34th in the Romandie prologue was his best result this year. A high overall position is almost impossible but his team is counting on him and he could come good for the final week? Indeed it’s the same story with many South Americans whether the entire Team Colombia with the likes of Darwin Atapuma and Jarlinson Pantano but also others riding for the Italian teams.

By contrast Carlos Betancur (Ag2r-La Mondiale) has to worry about holding the form he’s had since early April. He rode the Giro as a neo-pro in 2011 and finished fourth on the final mountain stage, proof he’s got the recovery powers for a grand tour. But the Colombian is likely to animate stages rather than the overall. The same for team mate Domenico Pozzovivo, the race passes through his home region on Stage 5 but recovering from a cracked rib, he’ll be more at home in the Alps.

Movistar pair Beñat Intxausti and Eros Capecchi could each surprise but I’m sure I said this last year too. One novelty is Saxo-Tinkoff’s climber Rafał Majka will be allowed chances for himself. One antique is FDJ’s Sandy Casar who is aiming to ride all three grand tours this year. The Frenchman was sixth in 2006, a notable performance for a rider long held to be cleaner than an FDJ jersey still in its packaging.