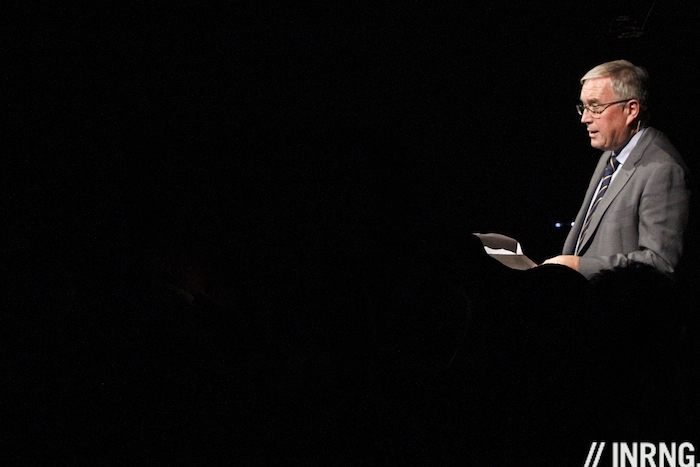 There’s a lot of focus on the likely re-election of Pat McQuaid for a third term as the UCI President. Rightly so because the job is an important one, both in terms of the political power but also the symbolism of being the boss of competitive cycling.

But I can’t help thinking there’s too much talk about the man and not enough about the job and the organisation itself.

First let’s run through the process of how you become the UCI chief. The President is elected by The Congress, a meeting of cycling officials from around the world, each from national federations. Under the UCI Constitution these officials appoint voting members to form an electoral college who vote for the President. There are a total of 42 delegates divided into regions as follows:

In order to stand as President a candidate has to be nominated by a national federation. Currently Pat McQuaid’s is the only name in the ring. But his nomination by Irish Cycling is wobbling pending a possible Extraordinary General Meeting. It’s right that the Irish get to debate who is the best candidate and I’ve been worried about foreigners trying to lecture them on the correct way to vote.. only few in Ireland ever got to vote, the emergency meeting could change this.

No challenger
If McQuaid’s nomination has been challenged, there’s nobody else considering running for the job for now. This is a real regret because elections are better when there’s a debate and a contest rather than a perpetual ruler elected without challenge. Compare North Korea and South Korea.

Possible challengers like France’s Davide Lappartient, Britain’s Brian Cookson or Moldova’s Andrei Tchmil are on hold. The UCI has successfully delayed contentious issues like the fallout from the Armstrong investigation. As a result the pretenders appear to be lining up for McQuaid finish a third and final term. It’s probably too late to launch a campaign anyway and the electoral system rewards the consensus builder rather than the agent provocateur. 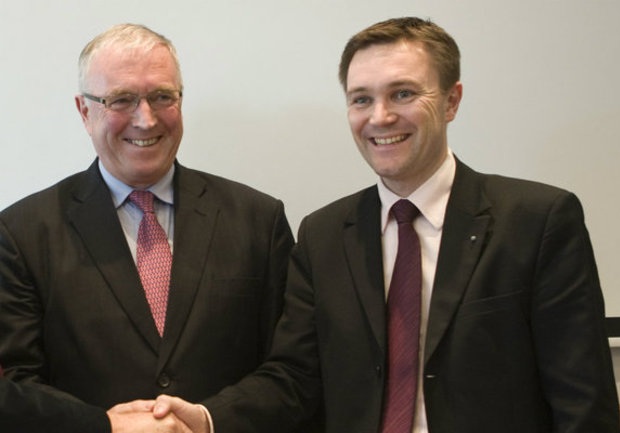 McQuaid tightens his grip on Lappartient

Indeed incumbency has its advantages. McQuaid has been flying around the world to meet the members of the UCI Congress who get to cast votes to elect the President and is assidously using the UCI’s own newswires to promote his activities and nomination. I gather the last time an outsider ran, Sylvia Shenk in 2005, that she didn’t even get a list of the congress members whilst her rival McQuaid had been visiting, writing and calling the others in order to cultivate relationships and harvest votes.

McQuaid’s Pitch
McQuaid’s buzzword is globalisation, the idea that the UCI is taking the sport to the rest of the world. I’m skeptical here. Globalisation is a tidal force and I can’t tell if cycling has floated on the current or actually been rowed hard in particular direction. Yes there are more foreign riders in the pro peloton than ever before but look at any pool of workers and surely you’ll find a similar result? Yes there are more races in Africa but there’s more capitalism so more sports marketing too. I bet your bike is made with parts from around the world. So if the UCI has gone global, so has… the globe. Especially when the UCI’s attempts to take pro cycling to China have been questionable and in the case of Hangzhou, backfired.

For better or worse, the process of winning a third term as President is not a political campaign, there are few broad visions, bold speeches and pledges so we don’t know what McQuaid’s third term would involve (apart from clumsy interviews and spats with international agencies?).

Ideas, Not Personalities
A coronation and then four more years of the same? Perhaps but I can’t help feel the contest shouldn’t be about the man but should be about the sport, the organisation and its governance. As I’ve said before we know McQuaid isn’t well-briefed for some interviews… so instead of criticising his clumsy style, we should be asking why aren’t the UCI helping him out here with media training or interview preparation? The same with all the angry press releases which the UCI concocts, does the Management Committee sign off on these? In other words this is a collective problem to solve, the creation of an institution and not a one-man band.

Helpfully McQuaid only got the backing of Cycling Ireland in exchange for a pledge to investigate governance reform. Here are the proposed ideas:

1. An independent review of the system of internal controls and processes at the UCI, with the findings to be published and the recommendations implemented.
2. Engagement with Stakeholders to re-write the existing Governance Code and the Code of Ethics, as set out in the Constitution of the UCI.
3. The following proposals are to be put forward to UCI Management Committee for tabling at the 2013 Congress at:
a. A limitation on the period for which a president or vice president can serve in the UCI as follows effective after the 2013 Congress:
i. The maximum number of two four year terms.
ii. No president, vice president or management committee member can serve the UCI for more than 16 years in total over their life time, in any capacity (paid, voluntary or other).
b. That co-opted management committee members are permitted to vote on all matters which management committee members are entitled to vote.

It’s quite something to get supported for a third term on a ticket… to end third term Presidencies.

Point 3.ii is also a way to tackle the issue of serving repeated terms. The UCI has the concept of “honorary presidency” which has allowed the likes of Hein Verbruggen to remain active within the UCI, attending vital meetings and more long. With Verbruggen it’s hard to debate ideas more than personalities but the “job for life” role is surely detrimental in most cases.

Conflict of Interest
Another issue that needs looking at the subject of conflicts of interest. This is a running topic on the blog, for example the 2015 world championships are being organised in part by Pat McQuaid’s brother Darach, his son Andrew is a rider agent. Now I don’t begrudge the McQuaid’s a living, the family grew up in cycling – they probably had their infant milk out of a bidon – but the point is the UCI needs to be alert to this. In the past President McQuaid said he “leaves the room” when talk of Richmond 2015 appears but how can those left in the room reach a decision without being implicitly influenced by their boss? It’s not just the McQuaid family. Britain’s Brian Cookson runs the UCI’s Road Commission and sits on the UCI’s Management Committee but is a director of Team Sky (although not a formal corporate officer): can he take decisions for the good of the sport whilst also having a fiduciary duty towards his team. A similar issue for Igor Makarov, the Russian oligarch is both the Katusha boss and sits on the UCI’s board.

What’s needed here is a formal approach to managing these issues. A register of interests is a start and then updating the rules on governance. But there are some moves in the right direction. Leaving the room is better than ignoring the issue and in the last few years the UCI has started publishing its financial accounts, an excellent move in transparency.

Easier said than done
Just look at soccer’s FIFA where promised governance reforms have been causing problems. A small governing body like the UCI will find it expensive to hire lawyers or consultants to draft weight governance reports and implementing the changes will be hard too. But on the positive side others have gone through these reforms, they can be imported rather than invented.

Conclusion
McQuaid this, McQuaid that. Of course his lead sets the tone for the whole body. Is he the best person in the world to run cycling’s governing body? Probably not but for now he’s the only candidate. This itself is a problem as the lack of candidates means ideas don’t get tested, records are not challenged. And why aren’t there other capable officials who feel they have something to offer? Thanks to the way the UCI works means that the incumbent has a natural advantage which means McQuaid, as the hand-picked heir to Verbruggen, could count on three terms from the day he took up office. This isn’t healthy.

Beyond this election itself there’s plenty to reform the UCI. Bismarck said “politics is the art of the possible.” Sure we can’t expect the UCI to become Transparency International but adopting easy measures from other sports bodies is achievable and sensible. With McQuaid heading for certain re-election perhaps we need to ask what will happen in the next four years rather than fixating on the idea of him being re-elected?