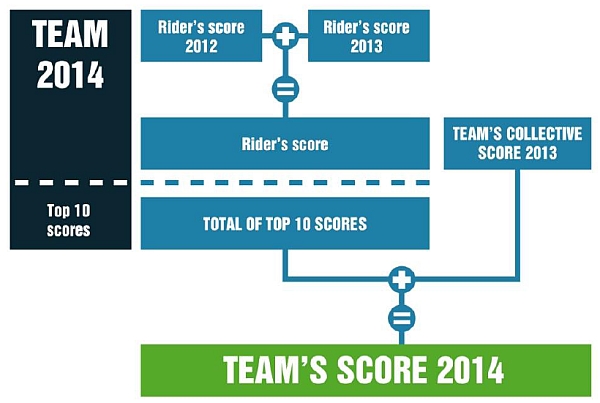 In my column in Issue 2 of 2r Magazine I looked at the options available for team licences with a view to bringing some more stability to the system. Whilst we can explore franchises and more, one of the cheapest and quickest solutions is to publish the UCI’s criteria for scoring riders and teams.

For years teams had been ranked on a secret system that few understood leading to a lot of head-scratching and confusion. Only last Thursday the UCI quietly published Annexe-2014/UCI/A-10… better known as the Sporting Value criteria.

It’s possible the UCI’s been reading 2r and reacted but I think it’s more likely this was going to happen anyway. It matters not, instead it’s a victory for transparency and good news for everyone. Why? Whether you are a fan, a professional cyclist or a journalist this system has been kept hidden from you.

Team owners and others were given the information but few others grasped the system. For example cyclo-cross champ Sven Nys said he wanted to lobby the UCI to make points earned in cyclo-cross races count… without knowing this was already in place. Amusingly Nys is one of the members of the UCI’s Athletes Commission and had been given the document. Even those briefed on the scheme didn’t know what was going on.

Amusingly in the recent online market research survey run by the UCI a question asks respondents to state if “I understand the ‘sporting evaluation’ the UCI uses to determine teams’ participation in the UCI WorldTour and the UCI Continental Circuits.” This is pro cycling’s Schleswig-Holstein Question:

“The Schleswig-Holstein question is so complicated, only three men in Europe have ever understood it. One was Prince Albert, who is dead. The second was a German professor who became mad. I am the third and I have forgotten all about it.”
– Lord Palmerston, British statesmen

Indeed so few respondents could reply “yes” to the UCI survey that you almost wonder if the question was inserted as a stealth test to measure the honesty of respondents?

So what’s the system all about?
As a reminder teams have to meet four criteria for a licence: sporting, admin, financial and ethical. The last three overlap a lot and are concerned with proper documentation, paperwork and conduct.

The sporting criteria are based on race results. Crucially it looks forward and measures a team based on the riders it has signed for the next year but, new for 2014, also awards extra points for teamwork in the past year.

How does it work?
It’s still confusing and you’d need a spreadsheet rather than the back of an envelope to work out the scores. Anyway, first riders win Sporting Value points for their position in the public rankings rather than their actual points.

As the tables show, riders receive Sporting Value points for their place in the table. Tables exist for the leaders of the UCI Africa, America, Asia and Oceania tours too, albeit with fewer points available. The same on an even smaller scale for U-23 riders. This changes the distribution of points to make a rider ranked 10th in the world as valuable, in Sporting Value terms, as the world number one. Rider agents say this creates a clear stepped system to rider pay, for example everything else being equal, a rider being 66th or 100th doesn’t matter but being 101st changes their salary. 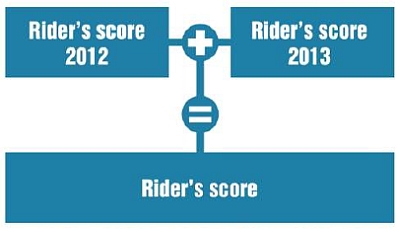 However to smooth out annual variations the rider score’s from the past two years are taken together to create their actual score or Sporting Value.

Bonus time
With these scores in place we then add extra points of they win a stage in grand tour or stand on the final podium. The same again with riders who win other stage races and their stages, as well as one day races.

Other points to wins in the world championships too. The point here is to reward winners ahead of those riders who place consistently. Finally riders who excel elsewhere win 10 points for being a world or Olympic champion and three points for winning a World Cup round. So Sven Nys gets his wish but note three points for a World Cup equate to one stage win in this month’s Giro del Trentino or the Tour of Turkey.

Team Value
A team’s ranking is based on the addition of the 10 best riders on the team. This matters because a team can have up to 30 riders and only 10 need to count for the points. It means a loyal domestique who pulls all day on the front need not worry about having to win points. For sure having points increases their value but only if they’ve got a bag of them. Note the system has moved from 15 riders to 12 and now 10 for 2014.

New for 2014 is the concept where riders leaving a team leave a share of their points behind. I’ve added the red box above to illustrate this. A team adds up their 10 best riders plus, it seems, 20% of the sporting value score for any riders that leave to another team, subject to them having ridden with the team for at least the last two years. For example imagine, for argument’s sake, that at the end of this year we see Fabian Cancellara move to IAM Cycling. If this happens he’d leave 20% of his points to the Leopard team and take 80% to the Swiss team. The idea behind this is that a rider’s results are the function of the team around them, a reward for the training structures and staff support in place. Plus it could reduce cases of riders being blocked from racing once management learn they are leaving, as happened to Jacob Fuglsang but also to many others because a team still stands to gain, albeit marginally, from letting a rider continue to score points.

Collective Aspect
As the diagram shows there’s also a “collective score” from the season. As we often see riders give wheels when the leader punctures, set the tempo on climbs and display all sorts of other teamwork. In short an individual win is almost always the result of the team too. Given this the UCI awards a bonus for teams sitting high on the UCI team rankings as well as getting results in races as the tables below show:

Altogether the collective aspect is modest but it again rewards a team with extra points for wins obtained during the year.

Doping Penalty
One final mention from the criteria is that a rider returning from a full two year doping suspension will not see their points, placings or wins count for these scores. In other words they are deleted from the system here. This places a substantial penalty on hiring a returning rider, for example Alberto Contador might have won the Vuelta last year but he earns no points for Team Saxo-Tinkoff. This is controversial because it imposes a penalty on a rider returning from a ban that is above and beyond the two year ban set out by the WADA Code.

Barriers To Entry?
One observation here is the system offers incumbents rewards and places some mild barriers to entry against a new team. Imagine if you wanted to launch a team for 2014. Well you’d have to sign a bunch of riders with plenty of points because your new squad will score zero for collective points. Plus you will only get 80% of the score of new riders signed.

This works the other way too, rewarding teams that deliver consistent results even if they see star riders bought by other teams. For example FDJ or Garmin-Sharp risk seeing their best riders poached but they’ll still gain were riders to leave.

Conclusion
This isn’t a gripping read but hopefully it’s useful to set out because the World Tour is such an important concept. Even the riders with jobs and contracts at stake have found it hard to know what’s happening.

Just as the UCI has started publishing its financial report we can now we can congratulate it for publishing the Sporting Value criteria. The points system was originally kept secret so riders stuck to racing instead of hunting points but the absence of information let myths grow about riders needing points. Even members of the UCI’s own athlete’s commission were confused. Meanwhile leaked copies were doing the rounds and hardcore fans were running spreadsheets to second-guess the rankings.

If we’ve got transparency, it’s a great. The system is still complicated, unlike other sports, promotion and relation is based on both past performance and the future composition of the team. At least now everyone can see how it works.