Reinventing the Wheel: The 25mm Revolution 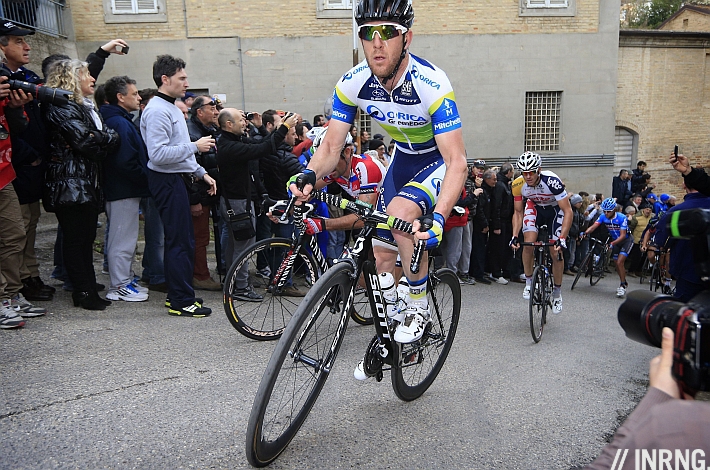 Notice anything fat in photo above? It’s can’t be the riders … nor the spectators. Instead look at the front wheel where Matthew Goss is running a 25mm wide tyre.

One trend in bike technology for 2013 is the advent of wider rims and tyres and, accompanying this, the progress of clincher tyres. It’s common to see 25mm width tyres on team bikes today, something that was unthinkable a few years ago.

As background it was long thought that the narrower the tyre, the faster it was. Especially when riders faced a time trial wheels could appear with 18mm tyres. These had the advantage of being narrow and so more aerodynamic and because there was less material, lighter too. It wasn’t just for the special stages, much of the bunch would ride on 21mm tyres for the whole year.

Once or twice a year things got wider when it came to the Tour of Flanders and Paris-Roubaix. But go back to 2006 and the reliable build-up of George Hincapie’s chances. In a piece looking at his bike there’s talk of 23mm and 26mm for the day.

These days Argos-Shimano, Blanco, BMC Racing, FDJ, Omega Pharma-QuickStep, Orica-Greenedge, Radioshack-Leopard and Sky are running 25mm. Why? Well increased grip is one explanation. But there’s more to it. Here’s one reason:

We went from 21mm and 23mm to 25mm tyres in the last few seasons; new research shows that 25mm have less rolling resistance and I have the feeling they give more comfort and traction so it’s a win-win situation
– Koen de Kort, Argos Shimano speaking to RIDE Cycling Review, Issue 59, p95.

Rolling resistance is the resistance encountered for a wheel to roll over obstacles in its way. The smoother the road, the lower the resistance. Unlike aerodynamics this is a linear force that increases in line with speed. Do wider tyres have lower rolling resistance? Probably as they are able to deflect more on the road but it depends on the pressure of inflation. As the wheel rolls over the imperfect tarmac the tyre constantly deflects as it crosses the surface. 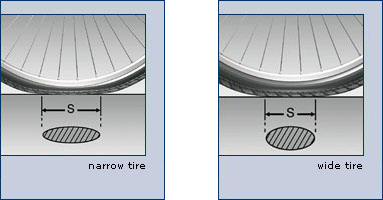 The diagram comes from Schwalbe and they explain that at the same tyre pressure, a wide and a narrow tyre have the same contact area. A wide tyre is flattened over its width whereas a narrow tyre has a slimmer but longer contact area. The long flatter area is less round so it doesn’t roll so well. In other words the shorter the S-measurment, the rounder the wheel. Bikeradar has more on this. 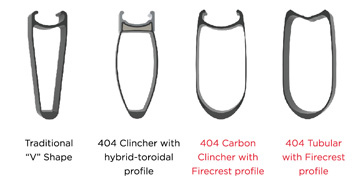 But there’s a new factor as well to explain the adoption of 25mm tyres in the peloton and it’s come through rim design. I think it began with Zipp’s Firecrest models (edit: I was wrong, it was HED, see comments below) which use a wider rim that’s bulbous in profile as the cross-sections above show. The wide profile is supposed to offer improved aerodynamics but what’s certain is the width, the rim is so wide it cannot be swapped easily with a standard rim because the brakes need adjusting. This was evident with BMC Racing earlier this year when they were marking bikes with tape according to what rims they’d got. BMC use Shimano wheels, the Japanese manufacturer is also offering wide rims. The same for Bontrager and we saw Fabian Cancellara in the Tour of Flanders using broad rims from Bontrager.

Wide = Strong
I have another theory about wide rims. They may offer increased aerodynamics but they are stronger too. Being wider means a larger arch which helps brace the rim against impacts, infact the sidewalls can offer some slight flex outwards. Here the rim can, in a tiny way, act like a tyre to dampen impacts. This is good for pros pounding the cobbles… but even better for manufacturers who get fewer breakages and returns after selling wheels to weighty weekend warriors. Put another way rims might be more sold as more aero but they’re certainly stronger too.

Clinchers, a stage to tubeless?
Finally a note on the topic. For years clinchers were an inferior product and required a heavier rim because of the sidewalls with hooks. The rim weight remains but because the mass market is dominated by clinchers a lot of R&D has gone into improving them. To the point where they offer lower rolling resistance. We’re now seeing riders using clinchers in time trials because they don’t mind about the wheel weight when they’ve already got a heavy disc on the back wheel.

Looking ahead one day perhaps all riders will use tubeless tyres. These have the body of a clincher but there’s no inner tube since the bead forms an airtight seal with the rim. It’s used on some mountain bikes and of course cars but the market is limited for now with road bikes. But if the market can adopt 25mm tyres when once upon a time it would have been unthinkable, who knows? 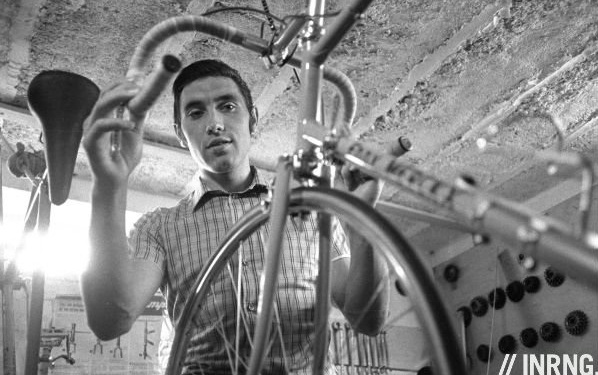 Summary
Once reserved for training, touring or Paris-Roubaix, now 25mm tyres are being used by nearly half the World Tour peloton. Increased grip and better rolling resistance come with width. But comparisons with the past aren’t fair because modern casings are much more supple yet lighter, you can have a 25mm model today that would have felt like a tractor tyre a decade ago.

Is there a big difference? Probably not but everyone is hunting for marginal gains. The revolution is in the spin of the wheel rather than design, the difference of two millimetres is evolution. Tyre width also also a function of the rim choice, it’s not just a question of glueing on wider tyres. Teams running 25mm are often those with wheel sponsors supplying wide rims. Squads on narrower rims, for example using the Campagnolo Bora, are using 23mm. Tyre pressure, the rubber compound used, the condition of the roads, the tube used inside and more all have their say. But fat tyres are here to stay.