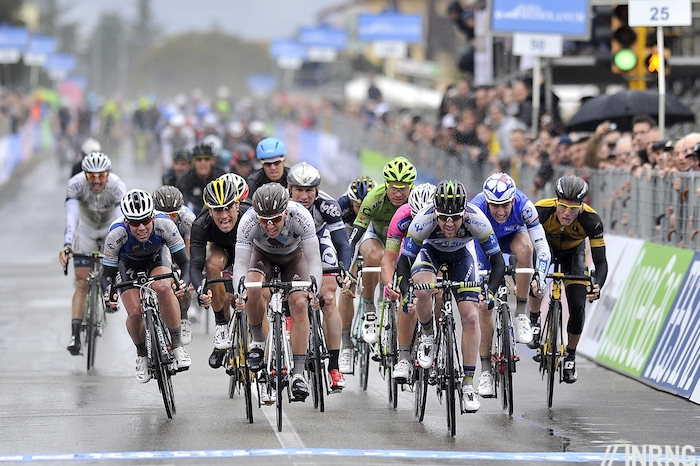 Mark Cavendish complained about his teammates after the second stage. He had the kick, but no help. Andre Greipel had a brilliant team, but didn’t have the legs despite being in a perfect position in the final. The big showdown between Cavendish and Greipel never came and I’m not sure we will see it on this stage either.

The 190 km from Indicatore to Narni Scalo may look like a sure thing for the sprinters, but the last 70 km have the riders climb several small, steep hills. Among these Todi with an average gradient of 12,2%. The last hilly section of the stage ends with 3 km to go. 800 meters of 4,8% serve as the last chance for opportunistic riders to attack but most likely this will end in a sprint. The heavy sprinters will probably have difficulties staying up front but those aiming at Milano – San Remo need to show they can deal with the hills.
The last 3 km are a bit tricky with a few difficult turns, especially a right bend with about 1500 km to go but the last 500 meters are straightforward on a 7 meters wide asphalted roadway. The weather forecast shows another rainy day for the riders and with many descents on last part of the route, it could easily turn into another chaos. Everybody want to stay up front – both the GC riders and the sprinters – and it will only take a single rider crashing to turn it all upside-down.

The way I see it, this is a great stage for Peter Sagan. As predicted yesterday, he didn’t have the necessary power to sprint for the win on stage 2 but with the many small hills and tricky finish, I think he will have the upper hand against Greipel and Cavendish on stage 3. Matt Goss produced a great sprint when he won in Indicatore and he shouldn’t have problems staying up front either this time. I doubt Lotto-Belisol will be able to provide a strong leadout train for Greipel in this type of finish so it could very well end up being every sprinter for himself.

The favorites want to save as much energy as possible before the big mountain stage the next day, but they won’t let anybody sneak away in the finish either. Vincenzo Nibali and Rinaldo Nocentini have both been showing great shape lately with many attacks in their previous races but they should both be waiting for tomorrow. Instead I’ll pick Moreno Moser as my joker. His conditions is already very good and with everybody looking at Sagan, Moser could try to get away in the final. Not as far out as in Strade Bianche but probably in the last 3-4 kilometers. Moreno Moser has his eyes on the GC too and it may be foolish to waste energy with a late attack, but on the other hand; he is one of few riders able to finish it off and a stage win sure is better than Top20 overall.

This may be the first time I’ve ever picked two guys from the same team as winner and joker, but I guess there is a first time for everything…

For live coverage of the stage check out cyclingfans & steephills.