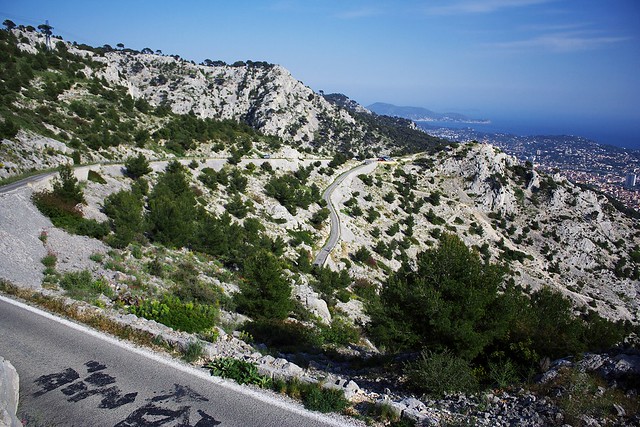 Saturday’s Stage 4 of the Tour Méditerranéen features the classic summit finish on Mont Faron. A short and steep climb above the naval city of Toulon, this is a tough and selective point in the race that reveals the early season form.

It’s the first summit finish of the year in Europe and to celebrate this moment in the season here’s a look at the climb plus a chance to try your forecasting skills to win some goodies.

Mont Faron
This is a cliff-like mountain above the port city of Toulon, base of the French navy. There is a narrow road – so narrow it’s one way – that leads to the top, some 584 metres above sea level. From the junction on the edge of town it’s a shade under 5km, with ramps of 12% and an average gradient that’s just under 10%. Many visitors go up via cable car. The race has used the road in reverse before but tomorrow takes the normal route via the western Fort Rouge side. The road surface is granular at best, with a patchwork of repairs and some switchbacks on the way up as you pass the typical landscape of small oak trees and arid terrain and slowly gaining a great view of the bay below. The vista comes with a price as the better the view, the more road gets more exposed to the wind. This can make the race tactical. Get a gap and rivals behind can look at each other, waiting for someone else to do the work but the climb is so short that there’s little room to hesitate.

It’s been a fixture in the sport for years with Tom Simpson, Eddy Merckx, Federico Bahamontes and Raymond Poulidor all winning on the top. In recent year’s it’s seen riders like Ivan Basso and Alexandr Vinokourov appear as stage racers. The 1968 Paris-Nice tried an innovation with the Meilleur Descendeur prize for the fastest rider down… sponsored by a ski manufacturer. Thankfully for rider safety this downhill innovation didn’t survive. 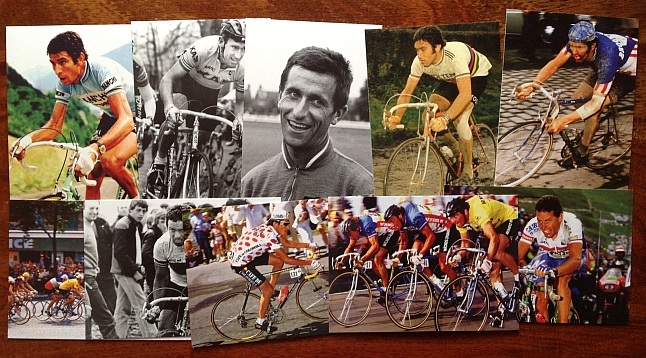 Postcards
Postcards still exist in pro cycling. Teams used to take promo photos of riders but the idea was bigger in the past, presumably before the internet these were a handy way to collect images of riders. The cards come from British outlet Prendas and the pack contains 10 cards with photos from the past… as well as a bonus card from Le Rouleur Lent that I’ll add as a joker to set.

Who Will Win?
That’s for you to guess. David Moncoutié was a four-time winner on here but he’s retired to the amateur ranks now. Last year saw Jonathan Tiernan-Locke aiming to win before snow prevented the climb from being used.

This year you’ll find a list of riders on cyclingnews and I’ll be watching Thibaut Pinot, Alex Geniez, Thomas Lövkvist, Dan Martin, Andrew Talansky amongst others but take your pick with the Colombians or veteran Italians like Frano Pellizotti or Davide Rebellin.

The Rules
Pick the stage winner of the Tour Med Stage Stage 4. Please leave a comment below with your choice, emails or tweets don’t count. You’ll need to do this before the race hits the start of the Mont Faron, someone who makes their pick with one kilometre to go won’t win. In the event of a draw I’ll pick a winner at random and if nobody is right, the closest pick wins.