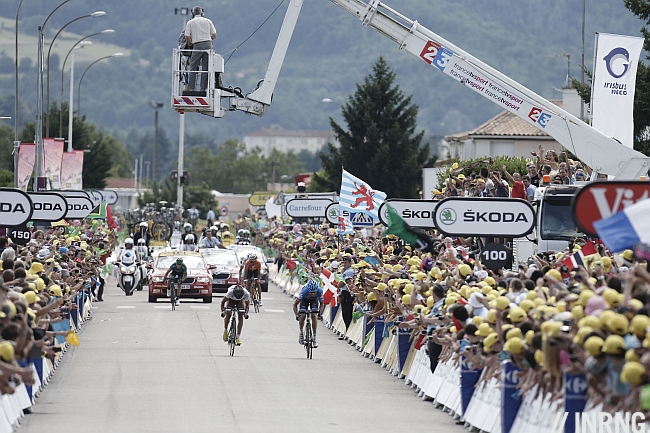 Fans crowd the barriers, dressed in yellow hats distributed by sponsors they look like sunflowers as they turn towards the stars of sport. Arms are outstretched, often to take a photo and mouths are open as people cheer. Despite a veil of cloud, everything is bright. Flags from Africa and Europe are visible and TV cameras beam the scene around the world. You can imagine the noise from the crowd, the TV commentators, the helicopters. This is the Tour de France.

Yesterday’s post showed a boring road with leaden skies. It’s from a town called Davézieux whose only claim to fame is that the Montgolfier brothers come from here. The brothers invented the hot air balloon, perhaps motivated by a need to escape from this drab place.

Only the photo in yesterday’s piece and the one above show the same piece of road. Check the crack in the middle of the road, note the arcing lamp posts and scope the roof tiles on the building on the right.

It all shows the difference the Tour can make to the landscape. A piece of road you’d want to avoid suddenly becomes the centre of the cycling world, the most desirable piece of real estate in the pro cycling world. Antoine Blondin wrote the following in L’Equipe back in 1964 (my translation):

For the 10th stage of the Tour de France you begin to grasp that the landscape, no matter how sumptuous it may be, doesn’t add much to a big race. The race is sufficient in itself, it finds greatness in its own means. It ennobles the scenery more than it borrows from it.

Blondin surely has a point here. I took the example of Davézieux at random because it’s both a Tour finish and a town nobody knows much about yet the race has ennobled the road, turning a sleepy part of town into a party, a sports stadium, an outpost of the UN.

But the same is true of more famous locations. The Arenberg cobbles have a mythical status in the sport but on a normal day the road is a muddy trail used by dog walkers and during the winter hunters chasing wild boar. There’s nothing inherently beautiful nor dramatic. Similarly there’s a nice view on the way up but Milan-Sanremo’s decisive Poggio is little more than an access road to some shack-like hothouses where so many of Europe’s flowers are grown before being trucked to Amsterdam. Yet once the race is on this road become scenic in itself and it’s famous thanks to the race.

The Poggio turning: a road or a theatre?

Even the might of the mountains is altered by the Tour de France. Start with a ski resort which often looks out of place in the summer once the snow has retreated to reveal concrete buildings and redundant ski lifts. Alpe d’Huez is a case study whose large blocks of flats resemble a high altitude social housing project. Yet it has become a place of pilgrimage for cyclists.

Names like Galibier and Tourmalet are celebrated thanks to notoriety gained from the races that have crossed them. Do these climbs in a car or a motorbike and they are strips of tarmac, albeit with some great views. But to pedal up is to follow in the slipstream of history. On a race day the roads are transformed, a giant picnic for fans and a race track for riders. We even add to the hype, cyclists call the top of a mountain pass “the summit” but isn’t the definition of a mountain pass the lowest point to cut across the landscape?

Even the TV experience is brought alive by the race. A large segment of the audience for the Tour de France is made up of people who tune in for the scenery and say they don’t care too much for the race. But think about it, would people sit down to watch three hours of helicopter shots of the French landscape if there was no race? I’m not sure, especially if the production just followed a 200km stretch of road rather than a documentary on the finest landscapes. The race itself brings something to the landscape, like contour lines on a map and helps give a sense of scale. 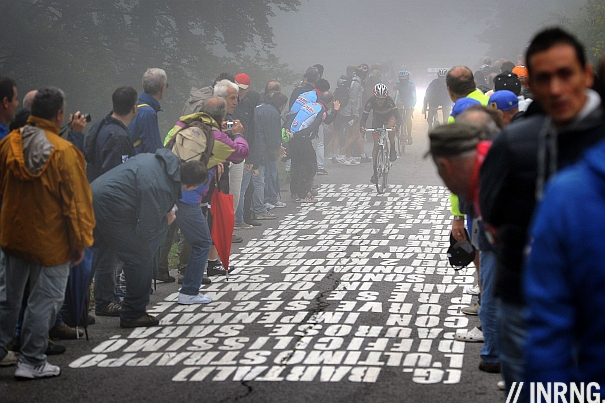 For obvious reasons no other sport associates itself so much with the landscape as cycling. One contrived attempt to mix these together is the Muro di Sormano above Lake Como in Italy. Reintroduced to the Tour of Lombardy this year, the steep road is notable for its gradient and its history. But this past is evoked with permanent road markings as you can see the image above. This is not the work of fans with a brush or a roller, instead a design consultancy has been hired to turn the tarmac into an interactive experience.

It’s not just history, as riders progress they get information on the altitude as well as quotes from past, information on what is happening and what has happened. There are also points where the views are explained, so you know which town down below is what. Once again this is a way to take a simple road and exploit the passage of a race. Alpe d’Huez has the names of past victors on each of its hairpin bends.

Finally there is also a practical aspect. A lot of work goes into sprucing up the landscape when the Tour comes to town. Farmers decorate their fields, villages hang flower baskets, roundabouts get ornate displays and cities are jet-washed and roads are resurfaced. July smells of bitumen. It is as if a medieval king has arrived in town, the whole route is improved for the race. Sometimes the landscape isn’t just smartened for a day, sometimes it is changed forever. The Port de Balès pass in the Pyrenees was surfaced so the Tour could cross. Not for locals, not for commerce nor tourism but for the Tour?

Conclusion
We might think the Tour de France basks in the glory of the French summer and landscapes but perhaps these things are actually improved by the Tour? Of course as cyclists we might well say this but even the casual visitor to France will find charm in the decorated villages, tidy cities and smooth roads that precede and outlast a visit of le Tour.

There’s something about a big race that does bring out the landscape, it can turn a drab residential road into something glorious, a bleak mountain road becomes the centre of the world. It’s hard to disagree with Blondin, no?