Here’s the Pinocchio, the official mascot of the 2013 world championships. He’s the wooden puppet who dreams of being a boy but he’s also known famous because his nose grows longer when he lies. As Wikipedia puts it “he has also been used as a character who is prone to telling lies and fabricating stories,” and no many are laughing when he’s linked to pro cycling.

But things are not as they seem. Famous as a liar, the puppet is also a symbol of hope in Italy. This and more stories below.

But the choice of mascot is more innocent as Pinocchio is a Tuscan character. Fiorentine Carlo Lorenzini wrote the stories and there are monuments to him and his puppet in the region and all without cynicism or irony. Indeed the story is not really about lies, it’s a more innocent tale and Lorenzini, who wrote under the name of Collodi, would often express a political vision of the future for Italy via these stories. So whilst we’re all laughing, the mascot is more a figure of hope than pity. 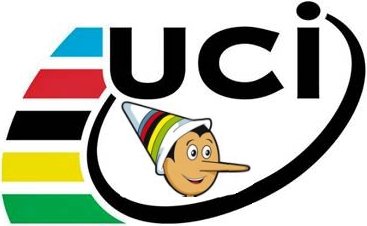 Still when a reader* sends in the image above you have to laugh. It would easier if a few riders noses did grow although it would not be long until Italian police were leaking recorded phone calls of riders with carpenters, complete with codew0rds for chisels and asterisked diaries mentioning which grade of sandpaper to use. 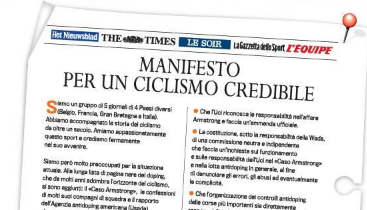 It’s very welcome and adds more pressure to the sport to fix things, a crowd of cheering newspapers roaring up the UCI’s more progressive members as they pedal into the headwinds.

Still we know newspapers do opinion as well as report news but it’s often worrying when media become the story. Also note The Times, L’Equipe and Gazzetta are all involved the sport by owning races or pro teams (Team Sky, ASO and RCS respectively). But this shows just how big things are when newspapers from around the world link up to demand change in the sport. Hopefully the UCI listens but my worry is it feels under siege and sticks to repeating the “no other sport tests as much” message which, whilst true, isn’t enough. Here’s hoping the manifesto gets more support.

Saxons vs Argonauts
One of the points mentioned by the manifesto is “reform of the WorldTour, its points system and licensing, which remains closed and opaque” and it’s true. No where on the UCI’s website is the system for the promotion and demotion of the WorldTour teams explained. We have rules of sock height available for reference but what determines whether a team gets automatic invitation is not known.

Right now the UCI’s Licence Commission is reviewing the teams and it’s based on riders signed for 2013 and their total of ranking points from both 2011 and 2012. If only this could be set out. Right now there looks to be a duel between Saxo Bank-Tinkoff and Argos Oil-Shimano for the last remaining place but Euskaltel and FDJ are not far away from relegation. If only this was more transparent then the UCI rankings would become more a talking point because they have direct consequences.

As said before though teams like Saxo and Argos should not have to worry too much. Wildcard invitations are there if they want them, the Tour de France without Alberto Contador is unthinkable right now and surely Marcel Kittel and John Degenkolb deserve another go in 2013?

That’s text from the minutes of a WADA meeting in May 2012 where WADA and the UCI’s McQuaid discusses how riders must pay fines before returning the pro peloton following an appeal to the Court of Arbitration for Sport (CAS).

When Alberto Contador was eventually banned by the CAS, it said it would offer a follow-up ruling on the size of the fine but I don’t think was ever made public.  Is the “one very big current case” Contador, or is another rider or even manager paying a big fine to the UCI? 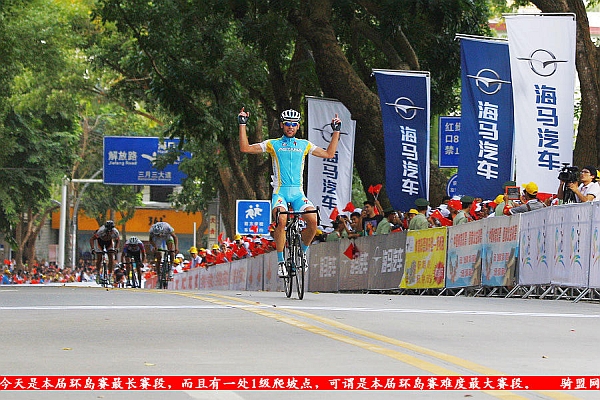 If it’s been a nightmare week for Pat McQuaid with confusing press conferences, emergency management meetings, critical interviews and more then the photo above must look like something out of a dream. The scene is from China and within the cropped image alone hundreds of people are watching the race, enough to make the UCI, as owner of the Tour of Beijing, quite jealous. Is it Photoshop? No, it’s the Tour of Hainan, it’s on now and comes via Twitter’s Biarnes72.

Hainan is one of the last races on the calendar and I don’t know how many watched the race in total but it’s good to see more local races attracting people.

“Race”
How about the Caribbean for a honeymoon? This weekend sees the annual Amstel Curaçao race on the Caribbean island of Curaçao. Riders get paid to fly out and enjoy a weekend with an exhibition race included alongside photo opportunities with dolphins.

Ride On
Finally a message from former sponsors Ride Cycling Review. They’ve sponsored the site before to promote the e-version of their magazine and a new edition has been out on the Zinio platform for a while. I promised to give it a mention but it’s taken a while to do a “Shorts” post on here given so many big stories. The Australian magazine has some good stories from the archives and if you’re after non-Armstrong related stories then take a look, for example the story of being a soigneur is available from the past for all to read.

* thanks for sending the image. I tried to reply but got an “undeliverable message”