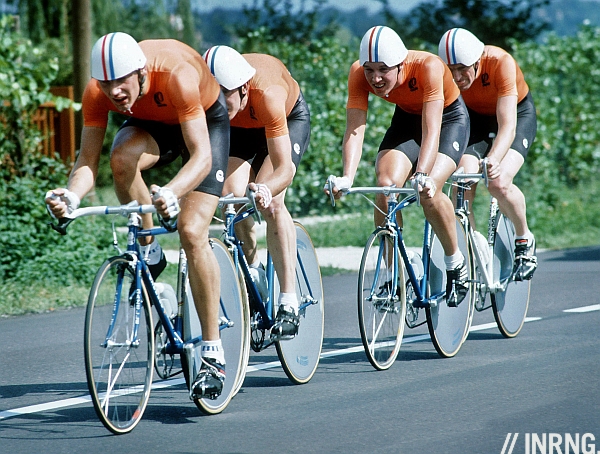 This Sunday sees a new event in the UCI World Championships, the team time trial. It’s new and relatively unknown and also very different from the usual team time trials we might see in a stage race.

Here’s a quick explainer of what is involved and why there’s no rainbow jersey for the winners.

The worlds this year are in Limburg, in the southern part of the Netherlands, the hilly part known to cycling fans because of the Amstel Gold Race. Indeed the Cauberg climb used for the finish of the Amstel is central to the events this month too. The duration of the worlds is extended because this weekend sees the team time trial introduced ahead of the normal programme of events, with time trials and road races.

Pro Team Time Trial
Unlike the time trial and road races which have national teams, the team time trial is for pro trade teams, for example Garmin-Sharp and Vacansoleil-DCM. In total we will see:

As we often see in a stage race there are big gaps between the top teams and the others but here the differences will be huge. It is nice to see teams coming from all around the world but it will be painful to watch them get blown away by the big-budget pro teams.

Team Size
There are six riders per team, meaning a smaller size when compared to, say, nine for next July’s team time trial in Nice for the Tour de France. Also the time taken is usually on the fifth rider but for the worlds, with the smaller teams, the time is taken on the fourth rider.

A smaller team means a different kind of race. A large squad can carry a few weak riders in the slipstream but down to six riders and there’s little room to hide. It remains a technical drill where practice and perfection count for a lot but with six riders it will come down to the individual power of the riders much more than the collective power.

No Rainbow Jersey
There’s no rainbow jersey. Instead the team gets “the distinctive logo” for the following year and this is not for the six riders on the day, it is shared with the whole team. Here’s the UCI rulebook:

The world champion team of the UCI Team Time Trial shall wear the distinctive logo on their jerseys in all road events from 1 January until 31 December in the year following the World Championship event. The world champion in the individual time trial is not authorised to wear the world champion’s jersey during team trial events.

The world champion team of the UCI Team Time Trial shall wear the distinctive logo on their jerseys in all road events from 1 January until 31 December in the year following the World Championship event.

So teams will get a special logo for their jersey and this will be worn in all events the following year, not just time trials but ordinary road races and everyone racing in the team jersey. If a rider leaves the team then they don’t get anything for next year. Indeed theoretically it’s possible for the six riders who win the title on Sunday to leave the team over the winter but the squad will wear the logo the following year. I salute the TV commentators who will have to explain this again and again next year.

Quite what the “distinctive logo” will be remains to be seen, presumably a play on the rainbow stripes trademarked by the UCI.

History
Team time trials go back to the 1920s when the Tour de France was a team time trial with teams starting separately from each other with the aim to complete the stage as fast as they could but this was dropped by 1929 after the race was dominated by a handful of strong teams. Since then individual stages have seen a team time trial.

There used to be a four man time trial in the Worlds and Olympics from the 1960s until the early 1990s (pictured above). It had the reputation as one of the most painful sports events in the world. It made an ideal recruiting tool for pro teams as any rider capable of pulling for 100km made fine domestiques and lead out riders.

The UCI has long tried to push the team time trial as a stand-alone race. When the UCI Pro Tour was created in 2005 a special team trial round was added to the calendar. The brainchild of then UCI President Hein Verbruggen, it was held in the Dutch city of Eindhoven and if you’d forgotten about it or never heard of it then it’s because it was a failure. Lacking the strategic importance within a stage race, the event was dull and few teams took it seriously. As soon as Eindhoven’s contract ended, the UCI said it would hold the event elsewhere but could not find a willing municipality and the event vanished, only to resurface as part of the worlds.

We will see how this works out. Even if more racing is good, the precedent is not great. As race promoter, the UCI gains extra TV revenue from increased broadcast hours but we’ll see on Sunday if this is a good event or not.

The women’s race is from 11.00 – 12.30 over a 34.2 km from the Sittard and Geleen conurbation to Valkenburg with the Cauberg climb at the end. It’s a technical course that twists and turns and if the course runs from north to south, there are sections in various directions meaning teams will need to change formation according to the wind direction. Pacing is vital over the climbs, more so once over the top where too much effort could split the team.

The men’s race is from 1.30-4.40pm with a 53.2km course, still from Sittard and Geleen to Valkenburg but with more climbing added and is lengthy for six riders. It has a some longer straights than the women’s race which will allow for high speed riding but it still has a suburban vibe, a bit like the Olympics.