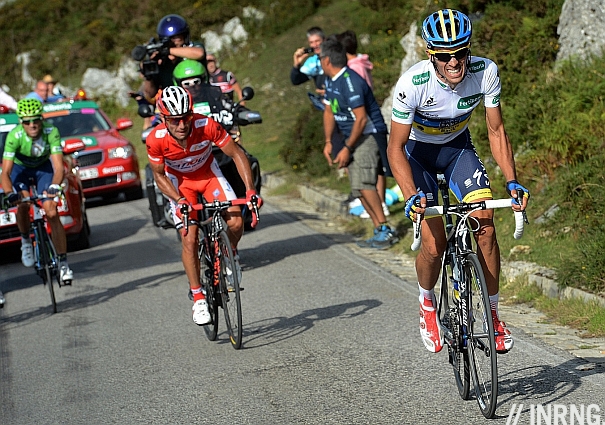 The cheerily-named French website cyclisme-dopage.com has been hosting research by engineer Frédéric Portoleau who estimates the power needed to ride with the leaders over the main mountain passes.

The estimates suggest the Vuelta saw some of the highest power-to-weight numbers of the year. Some will use this to draw conclusions but for me it’s more a tool to analyse the racing.

The Methodology
Many use power meters. These are strain gauges incorporated in the cranks and transmit data to a computer mounted on the bars which displays real-time output and saves the data for post-ride analysis.

Portoleau instead uses estimations. He’s not a bio-mechanic, instead he’s a software engineer. But it’s not as wild as it sounds because the engineer only attempts this on a climb with a significant gradient. Ideally a slope above 6% where the speed is below 25km/h and on a day without much wind for this removes much of the aerodynamics out of the equation and therefore the model is easier to work since you don’t have to factor in the effect of one rider sitting on the wheel of another. It’s similar to the use of VAM only more comparable from climb to climb because the VAM number tends to vary substantially with gradient, more so than power.

Portoleau then introduces the concept of puissance étalon or “reference power”. Rather than know the exact weight of the particular riders and their bikes, he instead works out what power would be needed for a 78kg rider to go alongside the rider in question. So if you weighed 68kg (150lbs) and were on a 7kg bike with clothing and water making another 3kg that’s 78kg meaning you’d have to average around 445W to stay with Rodriguez on the club to the Lagos de Covadonga.

That’s the data from the climb to the Lagos de Covadonga from Stage 15. Most headings should be self-explanatory but remember the puissance étalon explainer above, it’s not the power produced by the rider named, but the output needed for a 78kg rider and bike to match them, therefore it allows for comparisons. Note the measurement is taken during a section of the climb and excludes the final part with its irregular gradient. The full climb took 33.40. It is still a short climb and came after a relatively flat day of racing meaning more explosive riding was possible.

This climb has been a regular in the race and so we can use it to compare performances over time. Here’s an estimation of the winning power needed each time over the years: 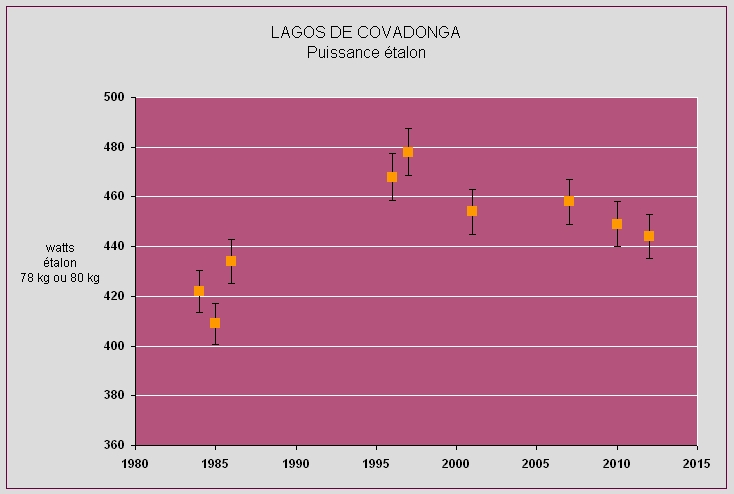 Adjustments were made for the 1980s to allow for rougher roads and heavier, inefficient bikes. Roughly speaking the reference power for our 78kg rider and bike is 420W in the days of Delgado and Millar, it rises to 475W for Pavel Tonkov, Laurent Jalabert and Alex Zülle before falling back a bit. Clearly there’s been a big jump in power for the mid-1990s when EPO use was widespread.

Here’s the data from the Bola del Mundo:

The Bola del Mundo is a good one to analyse as it was one of the longer ones in the Vuelta and therefore comparable to other long climbs from the Tour and Giro, and it also came after some longer climbs earlier in the stage. All three riders overall waited earlier on the climb and it was only later than the riders reached their max, in fact Rodriguez set a new record for the climb but it had only been used once before in 2010 and this time there was a light tailwind too.

Overall Portoleau’s verdict is that the Vuelta saw the highest wattages of the the three grand tours. Our “reference rider” would need to pump out 425W to hang with Rodriguez, Valverde and Contador when the estimated number for Ryder Hesjedal in the Giro was 400W and Bradley Wiggins pumped out 415W in the Tour.

My take
This is a useful but like all analysis, it’s how you handle it and the context that matters. For example the numbers in the Vuelta could be comparatively high because many stages had little climbing until the final ascension. Unlike the typical mountain stage, there was no series of high mountain passes to cross before the final ascension of the day meaning fresher riders for the final climb.

Portoleau has worked with coach Antoine Vayer, the former Festina team coach and Vayer often uses the numbers to point fingers. Right now Rodriguez is on the frontier. As someone who became familiar with watts in the late 1990s, today’s numbers look rather low but we can see they still remain above the 1980s. But any more is speculation, get out the crayons and join the dots to suit your view.

On the methodology, Portoleau has compared his work to real data taken from the SRM system used by many riders and it has matched up very well. But I’ve seen cases where his numbers don’t quite match too. A well-calibrated SRM power measurement system taking power direct from a rider has a +/- 2% margin of error meaning even capturing the data live is hard. Given this it is possible, it means that a figure of 415W for Wiggins could be 406W at the lower end and 423W at the higher end… and therefore comparisons across the season are very hard.

Conclusion
It’s tempting to draw conclusions from the numbers but if Rodriguez’s numbers are high, they are not outrageous and there’s a margin of error in the numbers so we need to be careful not to take every number right down to the last watt.

Instead we can use the numbers to help understand events in the race. In the past we might have looked at the average speeds of stages to get an idea of how hard the day was but that’s not a useful statistic as the peloton tactics vary, as does the wind. Timed ascensions, like Alpe d’Huez are better comparisons but they still aren’t perfect as the wind varies and other factors come in to play. VAM is useful but its variability with gradient means comparison are harder. In short power is the best measure of effort and since only a few riders share their data, estimations are the next best option.

Maybe one day we will all see the live race telemetry? SRM did offer this for some riders and you could view several riders’ power, heart rate and speed data online during the Tour de France but this was banned by the UCI at the start of the year.