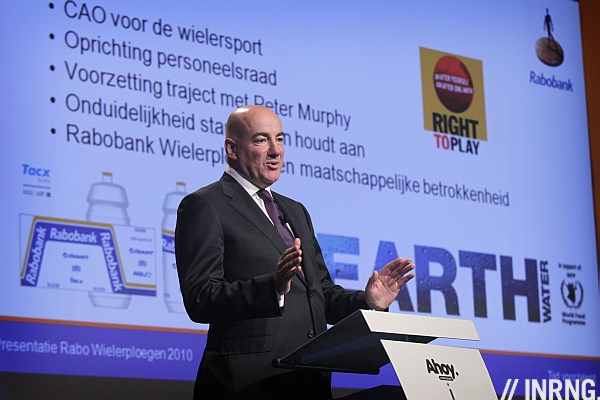 When a team fails to deliver results, the most common outcome sees the manager getting sacked. Yet this very rare in pro cycling as most team managers are also the owners of their team.

Not so at Rabobank. The team isn’t just sponsored by the Dutch bank, it is owned by them. The head of the team is Harold Knebel, a banker and not a cyclist (pictured above). Rabobank has total control of its sports sponsorship.

This week we got news of a management shake-up in the team. But it’s more than a shuffle of people and job titles, it’s part of a plan to make the team more professional. Indeed several teams are moving away from the old model of where the team manager hunts for sponsors, drives the team car, decides on tactics and negotiates new rider contracts.

The team can trace its DNA back to 1984 and the Kwantum team, over the years it became Superconfex, Buckler, Wordperfect and Novell until 1996 when Rabobank started. The pro team is the summit of a pyramid structure where the Dutch bank is closely involved in cycling, with a development team, a women’s team and all the way down to grass roots sponsorship. 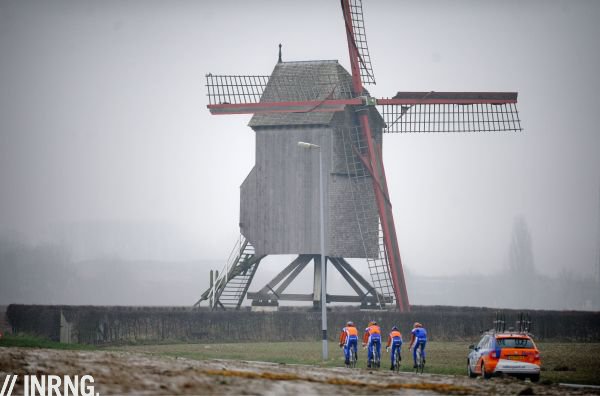 Which is more Dutch, the windmill or orange lycra?

Since then the team has been a strong performer but often outshone by rivals. It’s tried to be active all year long, aiming for the spring classics and the Tour de France overall alike. Did it work? Well Denis Menchov won the Vuelta and Giro and Michael Rasmussen was on course to win the 2007 Tour de France until he was thrown out of the race in disgrace. This episode changed everything. The Dane had claimed to be training in Mexico but TV commentator Davide Cassani spotted him training in Italy. This wasn’t a white lie, the anti-doping whereabouts system was being abused and when it emerged that he’d missed three tests, Rasmussen was ejected from the Tour de France whilst wearing the yellow jersey. He was sacked by the team manager Theo de Rooij who himself resigned a few days later. Rasmussen was banned but is still trying to sue Rabobank for damages.

Earlier this year Dutch newspaper Volksrant published a story saying doping had been tolerated in the team. If the article was meant to shock, it didn’t score high on the Richter scale because doping was so widespread at the time. What was interesting was the way the team tolerated things, it even had its medical staff advise the riders – including Dr Gert Leinders, worrying employed by Team Sky – but would not facilitate their doping. But this is not new, for example Dr Max Testa – today at BMC – gave the Motorola riders clear instructions on how to use EPO in the 1990s. Testa told the New York Times in a telephone interview that “he had given each rider literature about EPO, in case any of them decided to use it on their own.Dr. Testa said he urged the riders not to take the drug, but he wanted them to be educated.” Tolerating doping is one way of putting it, I’d use stronger terms like facilitating. And even if the team was not purchasing banned substances directly it was happening indirectly via salaries and bonus payments. The more a rider like Rasmussen earned, the more he could spend.

But all this is in the past or at least it seems they want to put things behind them, despite the current embarrassment over Carlos Barredo. So much so that Rabobank are working hard to distance themselves from all of this. It could be seen as a cynical move to switch all the staff without any introspection as to what was happening in the name of this large bank. But the changes seem genuine and reflect what could be a real change in attitude if the aims and aspirations are achieved.

On the management side the idea is to entrust specific roles to members of staff. Nico Verhoeven will run racing and tactics. Merijn Zeeman has been poached from Argos-Shimano to run the coaching. Louis Delahaije oversee training, medicine and innovation, the Dutch version of Sky’s “marginal gains”. Erik Breukink and Adri van Houwelingen quit the team car, being replaced by Lotto-Belisol’s Michiel Elijzen and Jeroen Blijlevens, the former sprinter who has been running the Rabo women’s team. And the team has announced other appointments as well as plans to link up with local universities to tap sports science knowledge.

The point isn’t the names or job titles, it is the functions. For years teams have been run like a small family business, a boss who spends time courting sponsors, driving the team car, deciding tactics, hiring and firing staff and more, whilst activities like training have been left to the riders. In recent years the entourage of helpers has grown with PR staff, chefs and admin staff. The old model worked but it was chaotic. Now Rabobank are professionalising the set up with managers taking on clear roles for coaching, recruitment, media. It’s not new, we see Team Sky as the model but they’ve really borrowed a lot from others and then built on this. CSC had their time trial coach Bobby Julich, now at Sky. Bjarne Riis has professional managers to negotiate sponsorship deals. We saw the Highroad team where Bob Stapleton was the owner but delegated much of the work to others; not for him the pre-race briefing. Garmin have a large contingent of coaching staff, for example Robby Ketchell specialises in aerodynamics and equipment. And of course there is Team Sky with its analytical approach to identifying and quantifying everything possible, a total focus on process. The British team’s next move is to manage its public image much more, controlling access to riders in a way that might be normal for other sports but against the open tradition of cycling. Maybe Rabo’s Richard Plugge, the new media man, will copy this too?

It feels like Rabobank have underachieved this year but they have won 23 races. But given the budget and ambitions they’ve not taken the wins they wanted, although L-L Sanchez succeed with a Tour stage win and Robert Gesink won the Tour of California, an important race as the bank has operations in California and note Marianne Vos has been winning everything. Will these changes bring the wins next year? Probably not as shake-ups like this take a while to start working, ask Team Sky who took a year or more to get going. But Rabo this year has already changed and the work put in this year should pay dividends next year.

Conclusion
A big management shake-up highlights the way teams are changing in their management. Rabobank has long been a wealthy squad but it’s now targeting resources towards improving its coaching and making giving separate members of staff specific responsibilities. The bank has been in the sport since 1996 and if the orange kit has been a continuous theme, the way the squad is run has changed. In many ways it’s mirrored the sport: quietly tolerating doping when several other teams were doing it; today it is all about process and sports science. Whether it succeeds depends on results next year.

The changes are to be applauded but what took so long? It’s not just Rabobank, I’ve always surprised at the lack of coaching staff on pro teams, how star riders, despite being the most precious asset of their team, are left to train by themselves. Yes cycling is different from other sports as riders live in different places and often need individual training sessions rather than group rides. But the isolation comes with plenty of risks, from making mistakes like over-training or worse, a rider visits a “doctor” for more than training plans. Pro cycling can sometimes look amateur.

There are other teams that still have the feel of a family business, for example FDJ-BigMat is built in the image of its maverick director Marc Madiot. Other teams like, say, Euskaltel-Euskadi have lower budget and can’t fund the same support. But amongst the big budget teams we are beginning to see a far more structured approach. The days of a team owner leaning out of the team car to give tactical advice might be coming to an end.