The Vuelta has already visited the Pyrenees but today sees the start of the real mountain stages in the Vuelta with plenty of climbing and descending too.

The Route: up and down all day but note the distance, it is just 149km. This means a high speed race and the early climbs should be covered fast as a breakaway tries to go early, it will need to get away fast and build up a big lead for later. However the first three climbs of the day are not too hard:

However the Alto Folgueiras de Aigas is hard with 6.7% for 9.7km but steeper sections along the way. The descent follow, it is fast and with a few tricky corners.

The Finish: the Puerto de Ancares is hard with 8.1% for 9.5km but as the profile shows, this includes a downhill section after 5km. The road kicks up to 12% with 2km to go and we can imagine riders have this point in mind for attacks. It climbs onwards via several hairpins before a final straight of 320m that rises all the way to the line.

The Scenario: we should get another showdown between the quartet of contenders. The finish is explosive enough to suit Joaquim Rodriguez again and the question is whether we’re beginning to see a clear order taking place with Contador as the next challenger and then Valverde and Froome fighting for the third step of the podium.

But with the big mountains coming we should look beyond the top four. Igor Anton seems to be coming good and Nicolas Roche can climb better than he time trials so he’ll move up. Rabobank have a trio of riders with Gesink, Ten Dam and Mollema who can all climb very well and Andrew Talansky is still in the top-10.

Weather: a mild 23°C but cooler at altitude. Given the wet weather over much of Europe the peloton is lucky.

TV: a change as coverage will start from 3.00-6.00pm Euro time, an hour earlier although some channels will start at 4.00pm as usual. Watch as early as you can to see the bunch form into a lead group and then a small bunch of contenders. 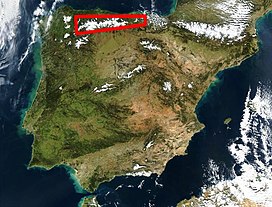 The Cantabrian Mountains: As the image above shows the Cantabrian mountains extend for a long way, about 300km across the north of Spain, compared to 500km for the Pyrenees. We might think of the Alps and Pyrenees for cycling but the Cantabrian mountains in Spain offer plenty of challenges (as to the Apennines in Italy). I’m fascinated by the effect of the Tour de France on the geography or psychogeography of Europe, that two roads of identical length and gradient could exist but one has legendary status in cycling but the other is unknown, how we know plenty about the Alps but little about Cantabria. This is true for some of the climbs in the Vuelta, and if the Angliru and the Lagos de Covadonga are part of the pantheon of ascensions, many other climbs in Spain don’t have the same fame.