Che buffonata, what a farce. In two words Filippo Pozzato sums up the last three months and more.

Today saw the hearing of cyclist at the Italian National Olympic Commission (CONI) after he was charged with consulting Michele Ferrari, the infamous sports scientist. The case is both a farce and a serious issue.

Background
Michele Ferrari was banned in 2002. But… when a ruling was passed in 2007 concerning bans, a loophole meant that Ferrari’s name was not on the list. If you want to examine the Byzantine procedures at work, the excellent cyclingpro.it blog covers it in italiano but for now, just note that Ferrari was banned yet not on a list of banned coaches.

Fast forward to 2009. Police from Florence were tracking Yaroslav Popovych – don’t ask – and quickly widened the investigation to include other riders. In a scene almost from The Wire, it seems Pozzato’s phone was tapped during and he apparently was recorded – speaking in local dialect – that he was working with Ferrari. The same police say he was paying €40-50,000 a year to Ferrari. 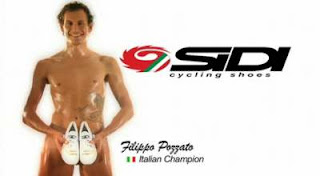 Eugenio Capodacqua, the scourge of dopers on the Italian peninsula got hold of the story and printed it La Republica column. When confronted, Pozzato admitted to working with Ferrari but said he was only paying for training schedules. There was no evidence of doping so no chance of a two year ban. But working with a banned doctor is still punishable under the Italian rules.

It’s here that Pozzato’s lawyer, Pierfilippo Capello (son of Fabio, the football manager) concocted a clever excuse. Because Ferrari did not appear on the list there was no way to know he was banned. Therefore when a dutiful Pozzato sat down to browse the CONI website he found the list of banned coaching staff he noted Ferrari’s name was not there and reasonably assumed it was fine to go ahead and work with the infamous doctor because, for all the bad things people say, Pippo only wanted training plans and this didn’t seem to be banned! 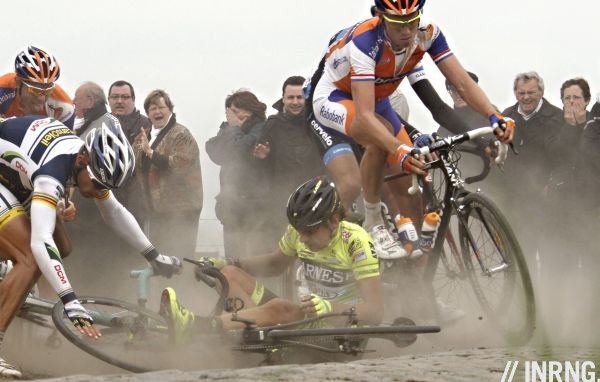 Knocked down but back up again

This once again reminds us of the weakness in the sport: teams do not seem to offer adequate support and coaching so many riders turn to private coaching. Or the more cynical take is that some squads want any suspicious practices outsourced so there’s no comeback if a rider is caught. Both views can be true.

Today
Pozzato now has a three month ban which ends on 19 September, remember he’d been on hold during the summer and so unable to attend the Olympics. The verdict suits everyone yet disgraces them all at the same time:

What next?
Pozzato can start racing with several upcoming end of season races awaiting. He’ll try to put this behind him and is hunting for a new team, there is talk of a return to Katusha now that the management has changed or he could go to Movistar, where fellow Ferrari-client Giovanni Visconti is racing. That seems to be it, the case goes back to 2009 and there’s no evidence of anything more than training plans, although if you believe he was just getting training program for €40,000 then Santa Claus and his elves are busy picking a nice present for delivery to you in December.

Nobody seems to have a bad word to say. He’s a likeable rider, the playboy image he’s tried to present covers an often modest and sincere man who lives at home with two dogs for company. Even the usually outspoken critics of doping are welcoming Pozzato back:

Also Pozzato is not alone here. Visconti, Enrico Gasparotto and Michele Scarponi are also going to face the same hearings as La Republica’s wiretap story also rumbled them. But their lawyers try similar tactics then they should have little to worry about.

Conclusion
We all make errors when copying and pasting information and Italian bureaucracy can legendary for its confusion. But this CONI’s omission of Michele Ferrari from the list is a big one.

I’m not sure about a two year ban for paying a banned coach. As we saw with Fränk Schleck, wiring money to a doctor of dope is not a crime nor a breach of the rules and crucially nor is it proof of doping. It is only proof of wiring money. But it is highly suspicious and paperwork mistakes aside, if a coach is banned then anyone hiring then the ban has to be upheld, including sanctions for those who seek to break it.

For another piece I’ve been look up doping cases from the past 20 years and procedural errors were alarmingly common. Medical certificates were fudged, bans were not properly imposed and there are many more tales of paperwork and loopholes. This is a reminder of the mess from the past, a time when the WADA Code didn’t exist and national and international rules often clashed and when agencies and governing bodies were not kept in check by the likes of WADA.

But if we think this is a story from the past, it’s not. Many active athletes have been hiring Ferrari and the Padova investigation into Ferrari rumbles on. It could stop but if the prosecutors bring charges there could still throw up some giant surprises.

Next post: Vuelta Power Analysis – What the Watts Say