With a lull in the world championships allowing the inhabitants of Valkenburg a chance to drive to the supermarket, the next two days see the UCI getting down to official business including the announcement of the 2013 calendar as well as some potential structural changes to the sport, like a salary cap.

As well as the governing body there is also news about next year from Cannondale and the Giro d’Italia which announces a visit to France for a mountain stage with a difference. There is also the guarantee of additional doping headlines in 2013 as the dates for the trial of Spain’s Operation Puerto have just been set.

And I’ve also got an exclusive update on the plans for a breakaway league. Here’s a peek into 2013.

First the Giro which today announces an incursion into France. Stage 15 will leave the Val di Susa, cross over the Col du Mont Cenis before taking the Col du Télégraphe and then onwards to a summit finish on the Galibier. The Tour finished there too in 2011 when Andy Schleck did his long range raid but that was on the southern side, the Giro will tackle the northern side… which is harder.

It’s not the first time, the Giro has visited France several times before and the last visit was 2007. It is a logistical challenge to finish on the Galibier but if you get the Tour to the top of the pass then the Giro is possible too. However the race will be almost two months earlier than the Tour and snow is a real possibility. 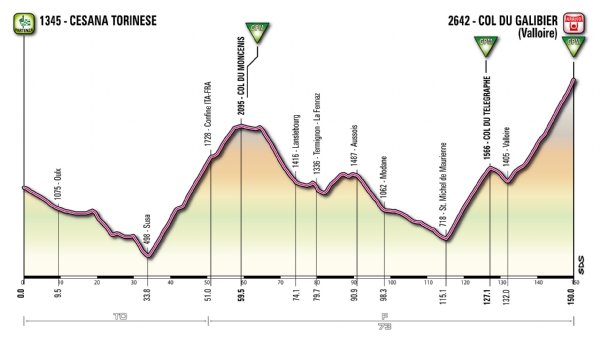 There’s been a buzz on twitter about the Galibier but nobody’s noticed the distance of the stage: it’s just 150km. We’ll get an action-packed “sprint” across the mountains rather than a 225km slow burning battle. The rest of the route looks is unveiled on 30 September. Don’t be surprised if other mountain stages are kept short and sharp.

Goodbye Liquigas, Hello Cannondale
Liquigas leave the sport after many years of sponsorship, the Italian brand of bottled gas belongs to a Dutch gas company that’s finally pulled its sponsorship. The team lives on and will be known as Cannondale Pro Cycling and the boss of Liquigas in Italy Paolo Zani enjoyed sponsoring so much he’s personally bought into the new team.

It’s arguably the first time a World Tour team gets a proper title sponsorship from the cycle industry because if BMC is racing, it is thanks to Andy Rihs’s prodigious wealth. The team has lost some riders to trim the wage bill and will be built around Peter Sagan, Moreno Moser, Ivan Basso with others in support.

I’ve got mixed views on this. It’s nice to see a team sponsored by an actual bike manufacturer although Cannondale says it will be for product development which is interesting but surely they are sponsoring for the sales and branding? This would be a very expensive way to test equipment and besides, pro teams can’t ride prototype bikes as the equipment must be approved by the UCI.

It does suggest that there’s no queue of corporate sponsors willing to put their name on a cycling jersey, just ask Orica-Greenedge where Greenedge is code for “your brand name here”. We continue to “sugardaddy” backers for teams and that’s fine but it does mean that the sport remains relatively unattractive for corporate sponsorship.

2013 Calendar
The UCI is holding its annual collection of meetings around the world championships. It was supposed to stop this year with the creation of a new “World Cycling Forum” trumpeted by the UCI. This was going to be a global conference for people in the sport to meet up once the season had finished but a host city was never announced. Instead the annual congress of the UCI takes place this week and we’re getting lots of news about the sport’s future.

As a reminder there is not one calendar for cycling but several, with the World Tour and then several subsidiary calendars in Europe, America, Asia, Oceania. The World Tour calendar is unchanged. This year we saw the calendar shifted back a week to accommodate the Olympics, for example the Tour de France started in June and not July and it seems this shift is staying across much of the calendar with Milan-Sanremo in mid-March all the way to the Vuelta in late August. The Tour of Beijing swaps slots with the Tour of Hangzhou, handy as the UCI can bill Beijing as the end of season decider in case Hangzhou never happens. There’s a full list of World Tour races at the bottom of this page.

In addition there are some new races to the UCI calendar. Britain gets a one day race in August on the same route as the 2012 Olympic road race. Canada gets a Tour of Alberta to slot in near the two one day races in Quebec in September. Australia adds a Tour of Western Australia. And Norway gets its Artic Tour, a new stage race… owned by ASO.

Structural Change?
The Professional Cycling Council has also said it will explore new ideas which seem designed to make team finances more stable. The first is a salary cap, in other words imposing an upper limit on rider wages and the second is a “compensation fee” when a talented rider is lured away from their first team to a bigger one. These are technical things and probably worth exploring in a full piece on here soon. But for now I can’t see them happening, they might work in US sport but pro cycling is far more disparate with a governing body sitting on top of a lot of competing interests instead of the business and franchise model we see with, say, the NFL. It’s all worth exploring though.

Breakaway League Reeled In
There has been both talk and a lot of work to create a breakaway league of cycling. It involved the teams securing financial backing and setting up new races. But the tone was softened last year when the plans were slanted more towards the creation of additional races.

Now I can reveal that these plans have been stopped. The presentations and documentation sit ready to be dusted off in case things change in the future. But for now the breakaway has sat up and allowed itself to get caught.

Summary
All the points above are related. The Giro is trying shorter stages to make the TV spectacle more exciting, thus boosting audiences and in turn attracting sponsors. Race organisers RCS are also working with teams to encourage them to bring their star riders to Italy and this includes shorter stages. But teams and RCS are also looking at financial deals and this is one reason why the breakaway league plans are on super-cooled ice.

Teams continue to have strained finances and the UCI acknowledges this and will explore ideas like a salary cap. Exploration is one thing, execution another. For now we see even the biggest teams finding it hard to raise money and even in Italy with its rich calendar we can see Liquigas finding US/Canadian sponsorship whilst Lampre will ride Merida bikes if it stays in the World Tour and smaller teams like Farnese Vini and Colnago-CSF see their best riders (Guardini and Pozzovivo) lured away by the likes of Astana and Ag2r and there’s no compensation fee.

Exploring these ideas is a start but for now, like the 2013 calendar, things look very similar to 2012. There is already the guarantee of doping scandal as the date for the Operation Puerto trial – yes it rumbles on – is now set for 28 January 2013. No riders are accused but many big names will be called as witnesses, including Alberto Contador, Ivan Basso and Michele Scarponi.