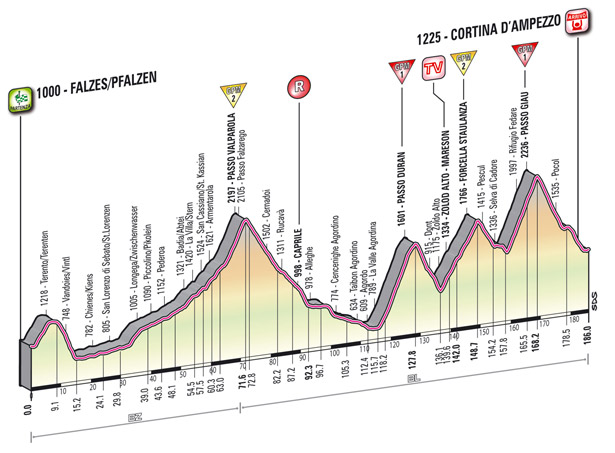 It’s only a 60km drive from Pfalzes to Cortina but the race takes the scenic route across several mountain passes. Look at all those climbs but don’t forget the descents too especially as the race tackles the Passo Giau and then a steep and technical road down to the finish in Cortina which includes a short uphill section too.

The overall classification in the race is beginning to settle and today should start to cement positions amongst the top-10. Those with ambitions might not want to wait until the climb of the Stelvio on Saturday.

Note the start, there is a ramp at the beginning. This should be where an early attack tries to go clear, this is the kind of stage start where some will be warming up on the rollers before the race begins so they’re primed for action right away.

The race heads across the Dolomites, a range of mountains within the Alps first named by a Frenchman called de Dolomieu and a core experience of the Giro every year. 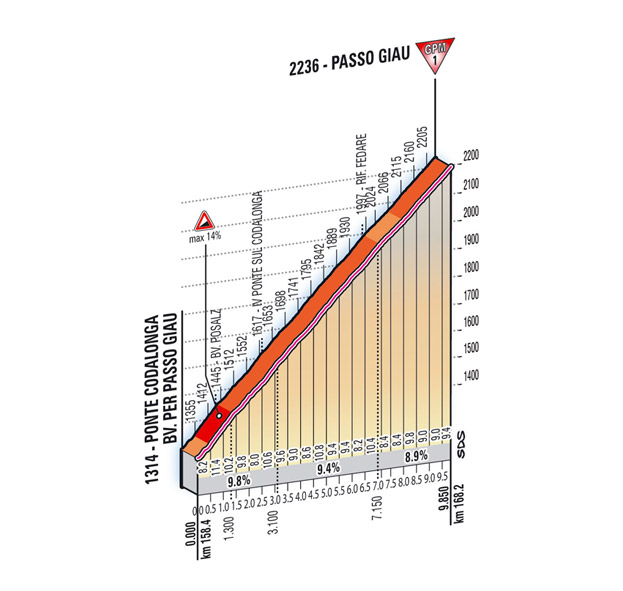 The Giau takes a new route this year uphill but it remains a mythical climb in the race because of its selective tendencies. First used in the 1970s and not surfaced, today it is surfaced but a tough climb as the constant gradients above show.

Four climbs make this a very tough stage but it is not the fatigue-fest of recent years, there is “only” about 4,500m of vertical gain. But this should make for livelier riding with riders more willing to attack towards the end.

We’ll see what the riders do with these ingredients. Liquigas are trying a tactical lock-down, making their riders force the pace on the climbs at such a speed that nobody can attack. This suits Ivan Basso who can ride steady uphill but struggles with changes in pace. But his team have been struggling, like a space rocket that jettisons burners and boosters as it heads into the skies, Liquigas seem to shed riders but too fast, leaving Basso exposed to the very attacks he fears.

The finish: it’s worth repeating how hard the descent is and some could be racing for the stage or even the overall down here. There’s a short climb midway down to test the legs and then more sinuous roads. Once in Cortina there is an uphill finish with 6% around the 1km to go point before the slope levels out towards the line.

Cortina is a well-known resort and host of the 1956 Winter Olympics. The Giro has not visited often but the likes of Fausto Coppi and Louison Bobet have won here.

TV viewing: the finish is expected between 4.50-5.30pm Euro time but tune in well before to follow the action. I am not certain but have seen something to say the live broadcast will start early today, with transmission from 1pm onwards. If not it will be 2.30pm.