Eight weeks ago the UCI announced it would ask its Licence Commission to review the status of Team Saxo Bank’s UCI ProTeam licence, its spot amongst the top-18 teams with automatic entry into the biggest races. Today we learn from the UCI that the team will keep its licence. Here’s a quick recap of the issues and also why Saxo Bank’s trouble’s aren’t over yet.

The UCI decided to review the team’s position, saying in a press release:

“If the points obtained by Alberto Contador, representing approximately 68% of the Saxo Bank-Sungard team’s total points, are disregarded, his team would no longer be considered to fulfil the sporting criterion required for the UCI WorldTour.”

Note the use of the conditional tense, the licence commission “may withdraw” the licence. I think it’s fair. In an interview with the Velocast podcast Jonathan Vaughters, Garmin-Barracuda owner team manager and also president of the AIGCP, the pro teams’ association, said the following:

“Bjarne got himself in a situation in which any of us could be in. He bought another rider from another team (from Astana, Contador) and said ok “I have to build my team totally around this guy because he’s the best stage racer in the world” and he made all the movements to make that happen. He let Fabian Cancellara out of his contract to go to another team because he was going to support 100% Contador and not be diluted. And he was not informed about this positive test.

All of a sudden, boom, he’s informed about it. He’s made all the wrong moves, ok. Contador goes to the Spanish Federation, he gets exonerated meaning that Bjarne has to pay Contador’s contract which is the largest in cycling. He has no financial ability to go and buy other points and that contract was validated by the fact that Contador was exonerated by the Spanish federation. He’s in a pickle.

All of a sudden in the middle of the 2012 season the appeal comes back and says “ok he’s suspended, all of his points are out of the window”. Where could Bjarne have made another move?”

Vaughters sets out everything well. Saxo and its manager Bjarne Riis responded to the incentives given to the them under the rules; the other riders on the team were wholly innocent of this. Yes the team is very different without Contador but nobody at Saxo is to blame here, to remove the licence would have been a form of collective punishment. Plus if you threw the team out, you wouldn’t promote another squad mid-season so there’s little point in the move in the first place. A shame it took eight weeks to realise this. 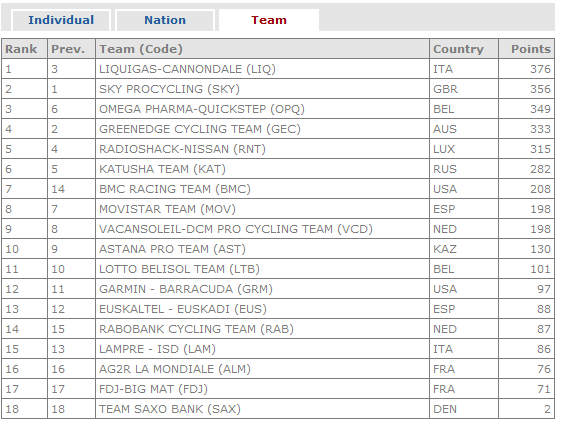 However, if Contador signs for Saxo Bank, then as I suggested in February if they are ejected from the World Tour they could be sure of many “wildcard” invitations given his allure. But if he doesn’t join the squad Bjarne Riis will have to shop for riders with points to keep the team up.

Remember Saxo Bank made an advert about supporting people in tough times. We’ll see what the Danish brokerage does… 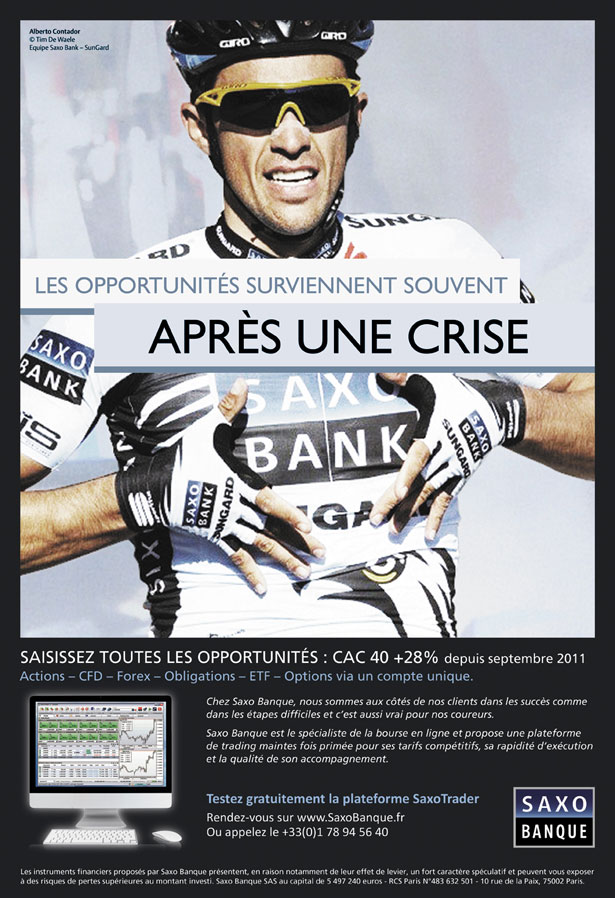 "Opportunities often come out of a crisis"

Summary
I don’t understand why the decision took so long, it must have been worrying riders and staff for weeks. The team is different without Contador but that’s almost punishment enough, they have struggled so far this season.

But Bjarne Riis and his Danish squad face plenty of extra hurdles if they’re going to remain in the top tier for 2013, even if Contador rejoins. Tragically the team’s salvation could involve an appeal to the CAS. Today’s decision is a temporary relief but the team’s future is far from certain.

Previous post: Flanders Classics, the company behind the Flemish races