In the summer of 2010 I wrote about the Power Balance wristbands. They were almost fashionable for a while but also became the subject of ridicule and even police investigation.

Now it seems a similar concept is here, this time under the name of Bioflow and they are being endorsed by a leading Team Sky rider amongst others.

As a reminder, Power Balance are silicone wristbands. The marketing message told us they “work with your body’s natural energy field” which is unclear on several levels. The company found itself in trouble and under investigation in several countries. In Australia it was ruled that consumers were mislead and were entitled to a full refund. Since then the message has been toned down and now they are just sold as fashion accessories.

Bioflow is a similar concept: a silicone band, this time with a magnet attached. It is a magnotherapy product and there’s little in the way of science to suggest this works, especially when the magnets involved are small enough to fit on a wristband. Still the company’s website makes this remarkable claim:

I suppose a testimonial of your life being changed includes sales data of people being becoming measurably poorer after spending up to 60 British pounds ($100) on a wristband. That said, the placebo effect is one of the most powerful forces in medicine so if people feel it helps then this makes for happy customers.

The Team Sky rider in question is Geraint Thomas and I’m surprised by the quote I found on the website, pictured at the top of the page here. I suppose the extra income probably makes him feel more confident. Good for him. Thomas won the Tour de Romandie prologue on Tuesday (without the help of the wristband) and he has joined “Team Bioflow”. In the past he’s done some promo work for cattle farmers in his native Wales which, I thought, worked better given the local associations and linking sport with a healthy diet. 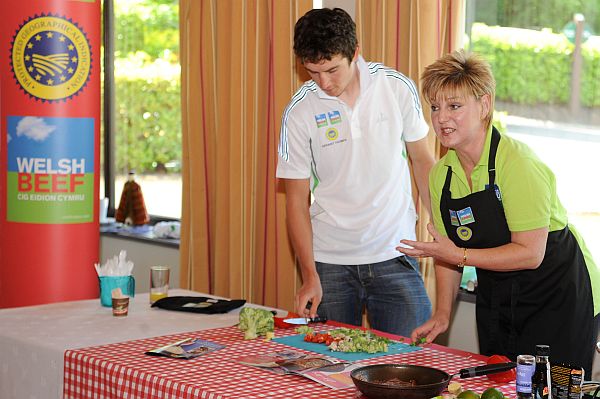 Now riders can promote a range of equipment, often they do this as part of their role on the team. When you see that a particular product is “the choice” of a team, often this is a financial decision rather than a hand-picked selection to aid performance. There can be other deals like sunglasses and shoes where riders sign personal deals. Sunglasses might just pieces of polycarbonate but still I feel there’s some use in wearing cycling shoes and sunglasses. Plus if some fashion brands make good margins, fine.

But a silicon band with a magnet? This just seems to be a marketing scheme to take well-known athletes and pay them to endorse a product that serves little purpose. Especially since some silicone and a magnet can probably be imported from less than a dollar. If you want to wear it, go ahead. But there’s no performance gain. The extra weight even slows the athlete. Good for Thomas if he can deploy his reputation to earn some money, a cycling career is short and risky. But surely there are better products to promote?

Summary
Let’s leave Thomas and his business deals to one side; he comes across as a nice guy in charge of his career. Many cyclists endorsed the Power Balance band too so this isn’t about one rider, it’s more about the companies who make these things hiring athletes to endorse the product. My favourite was Alessandro Petacchi who, on the advice of his physio, dutifully removed his wristband at mealtimes to “aid digestion”. Almost as if it was some kind of gastric band.

Instead I thought it was worth highlighting that these products offer next to no benefit or performance gain and it’s worth stating this before these things become fashionable again. Probably the only guarantee is it’ll make you poorer. Buy one if it makes you happy and let me know if it helps your focus during a race.