A very quick look at the Critérium International race that takes place on the French island of Corsica this weekend.

Many will have eyes on this Sunday’s Gent-Wevelgem race. Rightly so but 1,200km away we’ll see the likes of Cadel Evans, Frank Schleck, Chris Froome and others going head to head in a time trial today and summit finish tomorrow, all with the stunning island scenery on roads to be used for the Grand Départ of the Tour de France next year.

Split stages
The format is, dare I say it, old-fashioned. This is because of the use of so-called “split stages”, namely with a stage in the morning and another in the afternoon. Stages like this were popular in the past, especially in the 1960s and 70s but they are rare. But they could make a comeback as the format allows for shorter, faster racing and this is what race organisers and TV producers crave.

Corsica
The French call it the “Island of Beauty” and for obvious reasons. Surrounded by blue seas, this mountainous island is closer to Italy in more ways that one. Geographically you can see Italian soil from the island but history means the island has an Italian feel, whether the names of inhabitants, the climate, the local Corse language… and even the prevalence of organised crime on the island.

Normally a sprint stage, the race loops around the south of Corsica. The last five kilometres have several risky roundabouts and the finish line is slightly uphill with a 3% gradient. There are time bonuses at the intermediate sprint and the finish.

A time trial of 6.5km, the race uses the same roads as the last 5km of the morning stage. With a few rises the course is mainly flat but wind off the coast will be an issue.

A mountain stage to settle the race. The early climbs are obvious launchpads for a breakaway but the final climb should see the big guns come out as the bunch dwindles with the gradient. Note the 60km “flat” section from the first sprint to the foot of the final climb. 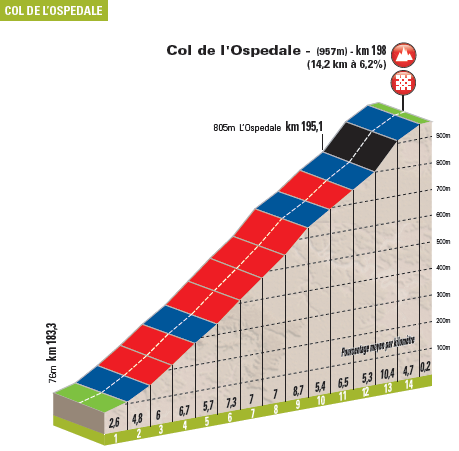 The final climb is tough and worthy of an Alpine pass with 14.2km at an average of 6.2%. If it was a steady gradient all the way up the climb would favour “diesel” style riders able to grind a big gear to the top. But the gradient varies a lot with sections at 7%, 8% and even over 10% along the way. Also the climb twists its way uphill and one minute there is a headwind and the next a tailwind. Again there are valuable time bonuses for the intermediate sprints and the finish.

The contenders: it might be run by ASO, organisers of the Tour de France but this is not a World Tour race. Instead there’s a mix of French squads and some big names. BMC, Sky, Garmin and Radioshack appear very strong but don’t forget in form riders like Nocentini.

Weather: Corsica usually enjoys warm sunshine and blue skies but there has been talk of rain for this weekend. However the latest forecast suggests sunny skies. Also the island can be windy at this time of year but we should find calmer weather. In all 18°C and blue skies with a light breeze of 10-20km/h from the North-East.

TV: Sunday’s mountain stage will be shown on French TV and with luck you should find a live feed from the likes of cyclingfans.com and steephill.tv.