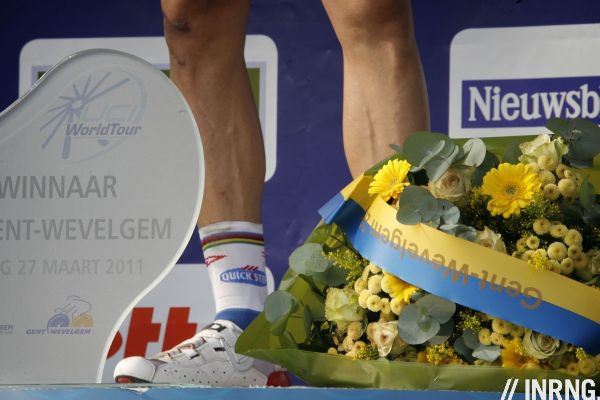 It’s not just the clocks that change. Recently this race was a mid-week test, sandwiched between the Tour of Flanders and Paris-Roubaix. Still a prestigious race in its own right, it was often for the sprinters and it would also allow the “losers” from the Ronde to fine tune their moves ahead of Roubaix. Now it stands on Sunday and is part of the World Tour calendar, a promotion to a higher status.

The Route
Another race with a false name, Gent-Wevelgem does not start in Gent. Instead Deinze is host to the start, a town of about 30,000 people some 25km away from Gent. It was the hometown of Karel Van Wijnendaele, a journalist who started the Tour of Flanders race in 1913.

The course is 234km long and heads west to the coast, through Tielt, Torhout and Gistel before reaching the port and resort of Oostende. Here the race hugs the coast. In years past the race has seen crosswinds shred the peloton to pieces, with riders blasted by the sand blown off the beach but Sunday’s edition looks calm, the kind of day when a visit to the Belgian coast could almost be a pleasant outing. See the detailed weather forecast below.

The race turns away from the coast and heads inland, crossing into France and past the old coal mines and slag heaps. It’s here the climbing begins with Mont Cassel tackled twice, once on each side. Onwards to the Mont des Cats – Catsberg in Dutch, These French climbs are paved, proper roads and whilst short and steep, are not savage. Back into Belgium and you can see the race route starts to resemble a discarded piece of string as it loops and goes back on itself. This is done to include as many bergs as possible in order to soften up the field and prevent an inevitable bunch sprint. In particular the Kemmelberg is climbed twice.

The Kemmelberg
Once the site of slaughter in the First World War, the Kemmel now welcomes all to ride up its cobbled road. It has been used in this race since 1955 when it was wholly unpaved. Now a mix of tarmac and cobbles, there are several routes up and down and recent editions have seen the race take a more sensible descent after the cobbles provoked bouncing water bottles, bikes and even riders to fell others in the race. This sanitisation means the climb can be less decisive than in the past but it remains a rough climb where riders tend to pick the dirt path to the side of the cobbles; and even if the descent is on tarmac it is narrow and twisty. With the Kemmelberg out of the way there are 30km to the finish.

The Contenders
Would you bet against Tom Boonen? In good form, he showed in the E3 that he can force a selection on the climbs and then when the bunch of 30 or so riders sprints for the line he’ll win. Hard riding like this can shed the likes of Mark Cavendish and André Greipel but in this race there’s a long 30km run in to the finish and so the pure sprinters might fancy their chances. Cavendish in particular might want to correct his Milan-Sanremo performance. More versatile riders like Freire and Sagan can follow Boonen’s attacks and might hope to trump him in the sprint.

Fabien Cancellara is in great form but again those last 30km make it hard for a solo effort. Still, if he gets a gap then he often wins. Another rider with motorbike abilities right now is Sylvain Chavanel and he too might fancy a long range effort but this kind of riding will pay greater dividends in the Tour of Flanders or Paris-Roubaix. As for others, Edvald Boasson Hagen has won before, his form this season seems erratic but it’s often this way. Pozzato is in good form, the same for Daniele Bennati, John Degenkolb and Greg Van Avermaet. Outsiders could include FDJ’s Arnaud Démare in his biggest race so far and possibly Tyler Farrar who has yet to shine this season.

TV
Local coverage starts at 2.20pm Euro time with the finish expected from 4.45pm to 5.15pm. Belgian broadcaster Sporza and francophone sister station RTBF will be streaming the race. cyclingfans.com and steephill.tv will offer links to more video streams. Don’t forget the clocks change and if your Sporza feed does not work, setting your computer clock to Central European Time can fix this..

Weather
A fine spring day. Temperatures could reach 22°C and there will be winds from the NE at a meagre 10-15 km/h.

Next post: Gent – Wevelgem: The Moment The Race Was Won