Gent – Wevelgem: The Moment The Race Was Won

Tom Boonen won the sprint to the line. As you can see from the image above he is level with the lime green Peter Sagan and the red and white Oscar Freire with 200m to go. But this was not the crucial moment of the race. Instead an acceleration 30km from the finish on the Monteberg climb made all the difference.

Just before, on the Kemmelberg the bunch was strung out thanks to a move by Rabobank’s Matti Breschel. Onto the Monteberg and the gaps were opening up. Fabian Cancellara and Peter Sagan prompted the move over the Kemmelberg and the Monteberg multiplied the difficulty. As they tried to escape and behind a larger group was forming in pursuit. This select group was noticeable for three reasons:

Omega Pharma – Quickstep were able to drive the group away from a larger peloton with the sprinters in it. Aided by Katusha keen to set up Oscar Freire for the win, the group slowly pulled away as it hunted down Cancellara and Sagan. 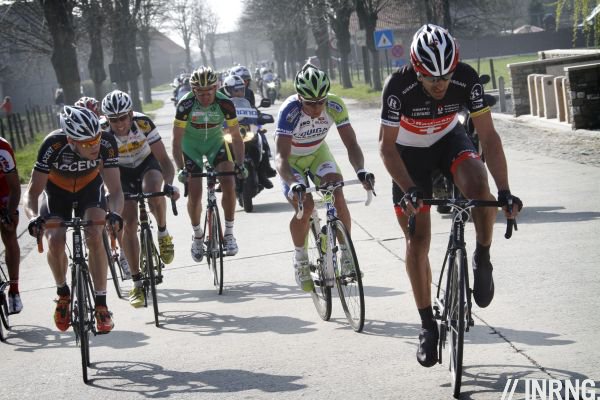 The Swiss and Slovak national champions caught the remnants of the day’s early breakaway but having these riders on their back wheel seemed to cramp their style and anyway, Omega Pharma – Quickstep and Katusha were pushing hard.

Meanwhile back in the larger bunch, some 25 seconds behind Boonen’s group the chase was led by Sky. Ian Stannard and Matthew Hayman were working and if Stannard is sometimes worth two riders, it was not enough to close the gap. Many of the pure sprinters saw the race slip away.

Omega and Katusha worked and Sebastian Langeveld of Greenedge joined in, for the sake of Matthew Goss. But others were getting a sedan chair ride to the finish, including fast finishers like Edvald Boasson Hagen, Breschel, Sagan, Jose Joaquin Rojas and Daniele Bennati. But Bennati punctured with 10km to… but he still found the force to get back, thanks to some suspicious drafting of the Radioshack-Nissan team car.

The sprint
The finish line in Wevelgem is one very long straight and ideal for Tom Boonen. Once a contender for bunch sprints all the time, his style has been to start with a long sprint and to wind up a very large gear; no springing off someone’s wheel with 50 metres to go. Here he hit the front with 200m to go and nobody came past. For me the fact that he won a sprint from a group is no surprise given his recent form, the more impressive aspect is the way his team swarmed to the front at the right moment and helped to pull Boonen away from a larger bunch sprint. That’s why I think the Kemmelberg and Monteberg were more decisive than Boonen’s sprint.

Rojas down, Gilbert out
As the sprint went on Movistar’s Rojas crashed with several other riders. Also note Gilbert tried an attack in the race but this seemed like a weak move. If he was strong he would have waited for the right moment, instead here he just went away on a flat section and never got more than a few seconds. Luckily for him, Boonen’s success seems to be slowing the Belgian media from investigating and interrogating Gilbert’s over his poor form.

History
Perhaps this wasn’t a vintage edition; you probably wouldn’t buy the DVD highlights. Held under spring sunshine, the race only came alive in the last 30km. Yet Boonen takes his seventh win of the year and his third Gent-Wevelgem victory. With the E3 Harelbeke Prize on Friday, he has won two World Tour races in three days and is one of the sport’s all time best classics riders. So even if the race wasn’t perfect viewing, watching Tom Boonen join the greats is still special.

Indeed he is judged by such high standards in the Belgian media that his season will be defined by the next Sunday’s Tour of Flanders and Paris-Roubaix the following weekend, celebrations this weekend are tempered by thoughts of next weekend. I don’t think he’ll have it so easy.

Tornando Tom Frits? Apparently the guy has a mobile kitchen selling french fries, frits in Dutch. The giant banners are a form of ambush marketing.