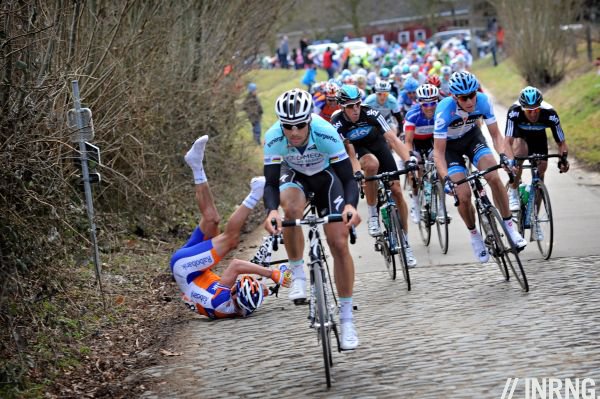 A look at the photo above. Photography allows us to catch a millisecond in time and portray the moment as a whole story. Here is a great example. We have Lars Boom taking a tumble at the foot of the Taaienberg. That’s Lars Boom, cyclo-cross champion, a rider who can handle his bike. The fight for position is intense in moments like this and Boonen doesn’t give ground. Boom runs out of road, hits the soft earth. Game over.

From this moment onwards Tom Boonen does his trademark move on the Taaienberg. Dutch Wikipedia says the climb has an alternative name, the Boonenberg for the Belgian rider loves to test his legs on the climb. It’s this moment that the selection is made, see Sep Vanmarcke in the right position whilst Hayman and Flecha are ready to join Boonen too.

Boom was in the perfect position. One minute contender, the next hospital. Such is the brutality of races. It’s not just the fight for space at the front, many riders went down in the middle of the bunch as waves spread across the bunch. It’s fantastic TV but a fierce way to earn a living.

Ride of the week goes to Sep Vanmarcke. First it turns out he stood up and told his team he wanted them to ride for him, bold for a 23 year-old surrounded by veteran classics specialists. Then he was right on Boonen’s wheel as discussed above when the selection happened. And with 20km to go he attacked on the Padestraat cobbles and only Boonen and Flecha followed him. He was perfectly placed for the finish line and blasted past Tom Boonen for the win. Sometimes you can get lucky on the day but Vanmarcke’s ride was hugely impressive.

Cavendish delivers
Mark Cavendish wins a sprint isn’t much of a story these days. But his win was still impressive. First it looked like he was carrying some extra weight back in Qatar. Maybe it’s been an optical illusion, he is a solid build and besides they say horizontal stripes on your jersey make you look bigger. But he passed the climbing test today no problem, in fact he and Bernhard Eisel were leading the bunch up the Nokereberg.

More impressive was the bike handling. He rode with the fearless determination of a Bangkok tuk-tuk driver in rush hour traffic. The road changes direction and width, yet Cavendish and his team were in the right place and were never bounced out of place.

Can you feel the pressure?
We’ve only had one weekend of the Belgian classics and already questions are being asked of BMC. Cyclingnews does its bit in English. But the Belgian media goes to town on these stories. Garmin-Barracuda’s Jonathan Vaughters told Vanmarcke to “train professionally and take care of yourself and don’t let the Belgian media drive you crazy” and he could win a classic. Note the reference to media pressure. The coverage from now until late April is intense. As cycling fans this is great but it can drift into tabloid or “soap opera” dimensions.

The BMC backstory is solid: a very strong squad and there’s an expectation of results. The right time to ask questions is mid-April but until then expect plenty of scrutiny, fair or unfair. It’s not just BMC, Rabobank have similar treatment in the Dutch media too. Luckily to use a horrible – but this time appropriate phrase, Rabo have opened their account this season thanks to a win from Michael Matthews in the Clásica de Almería.

The absence of income tax is the reason why most people live in Monaco. But Tom Boonen and Philippe Gilbert can also enjoy the local sunshine and stay out of reach of the Belgian media. Meanwhile Vanmarcke’s girlfriend is already becoming public property.

Liquigas-Cannondale, unbeaten
They might market bottled gas but there’s no pressure for Italian squad Liquigas-Cannondale. Eros Capecchi won the GP Lugano in Switzerland. Liquigas-Cannondale have had a solid start to the year, in fact they’ve won every race in Italy they’ve started… all four thanks to Elia Viviani in the two stages of the GP Costa degli Etruschi plus the Giro della Provincia di Reggio Calabria and Moreno Moser in the Trofeo Laigueglia. Lugano is in the Italian-speaking part of Switzerland so this almost counts as another home win.

Vincenzo Nibali won the Tour of Oman adding to the tally too. But whilst Capecchi won today, Ivan Basso pulled out. It’s probably a good thing as Italian journalist Pier Bergonzi points out. Basso has won this race before but it means he’s peaked too early in the season. Better to target big races.

French success
Victory for FDJ-BigMat in the Boucles du Sud Ardèche race in the South of France. With Hutarovich in second place in Kuurne and neo-pro Arnaud Demare in fourth place the week has ended on a, ahem, positive note for the French team after Yoann Offredo’s one year suspension was announced earlier this week.

More cheer for French cycling comes from rising membership reported by the French Cycling Federation at their annual assembly, now with over 100,000 members and growth in this number. In years past the number had shrunk but it’s been rising, in part thanks to more mountain biking members but le cyclisme traditionel, road cycling to you and me, is now on the up again too. It’s worth noting that the FFC is the main federation but it has competition from the FFCT (cycle touring) and a rival umbrella sports group called UFOLEP which offers races more orientated to beginners and the occasional racer.

Who made your bike?
The piece on the Asian factories who produce fames and more for the major brands was the most popular read on the blog this week… and by some margin. Thanks to the CyclingIQ blog for providing the inspiration.