FDJ’s Yoann Offredo has been suspended for one year by the French Cycling Federation after three anti-doping “whereabouts” errors. News of the mistakes came out in early January. Now the sanction has arrived.

Is it harsh? This depends on your viewpoint but we have a rider entering the prime of their career suspended thanks to paperwork problems.

As a reminder, pro cyclists have to be available for anti-doping controls all year and away from racing. Riders use a WADA software package called ADAMS to list a one hour slot for every day of the year where they can be found by testers and controlled. Typically they specify an early morning slot, for example 6am-7am because they’re bound to located at home in bed. When riders complain about the 6am test, it is normally their choice to be tested at this hour.

But a rider’s location is never that typical. They are on the move every day for stage races. They are filling in their calendar one minute and then readjusting it the next because of injury, whether to themselves or a team mate’s injury means a late call-up to a race. There have been cases of riders showing up at the start of the Tour de France to replace an injured rider not having time to warm up for the prologue such has been their last minute call up. If a rider is told to jump on a plane they might be too busy packing a suitcase and saying goodbye to the family to think about updating ADAMS. But that’s why we talk of professional cycling and just as a rider has to pay constant attention to diet, teams try to drill the importance of Whereabouts into all riders; some even task their agent with the updates… but the athlete is always responsible. For more on the ADAMS system, see the Cyclingtips blog.

A no-show can be explained. A delayed flight, the inability to log on, if a rider can explain they weren’t to blame for the no-show then it is not counted against them. The three strikes are spread over 18 months and drop off after this period.

These “out of competition” tests are essential because athletes do not simply dope for the race day but instead can take banned substances to boost their training, recover faster from injury or accelerate weight loss, all whilst away from competition.

Positive test for incompetence?
Offredo seems to have been done for bungling incompetence instead of sinister cheating. Two of the mistakes are simply because an athlete must fill in the system once every four months with their expected location and Offredo was late in doing this.

“Once is an accident. Twice is coincidence. Three times is an enemy action”
So wrote Ian Fleming in one of the James Bond novels. An athlete is notified of the no-show or admin mistake, they might be casual about the first or even the second one but the third one puts their career, earnings and reputation in peril so to make three errors is almost asking for a suspension. If this sounds harsh, let’s imagine an athlete determined who is determined to dope, they could deliberately duck tests whilst on a programme of banned substances, indeed this was part of the plan used by athletes under the supervision of the Balco lab’s Victor Conte. As a consequence the three strikes rule seems reasonable to me in order to have an effective system.

Offredo specifics
He’s got a one year ban which is the minimum permitted under the rules. Here’s the WADA code:

10.3.3 For violations of Article 2.4 (Whereabouts Filing Failures and/or Missed Tests), the period of Ineligibility shall be at a minimum one (1) year and at a maximum two (2) years based on the Athlete’s degree of fault.

One of the no-shows was apparently because his team promised to handle the admin but apparently messed up. If so he might be suspended from racing but his team probably won’t sack him. The other mistakes seem to be down to forgetting to use the system entirely. 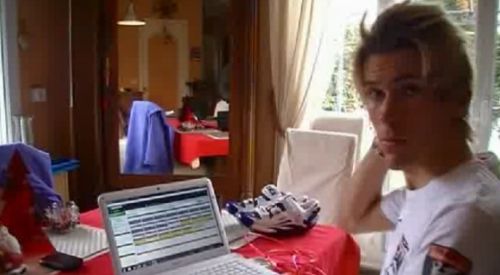 Many in France see Offredo has an outspoken rider on the subject of anti-doping and so the surprise of seeing him banned is pronounced. Few think he was up to no good but I notice each nation can be more generous with the benefit of doubt when one of their own riders is involved.

I’ve watched Offredo for two years now and am saddened to see him out, he’s a talented rider for the cobbles and a valuable help for sprinting talent like Arnaud Demarre and Yauhueni Hutarovich. But this is an exemplary and model case. Three no shows have brought about a ban, exactly as the rules stipulate and he’s copped the minimum sanction. Both rider and team seem to be at fault here although if the team has screwed up the rules stipulate he carries the ban. If many are saddened by the suspension, this is all preventable with professional admin.

He can appeal but I don’t see the grounds for this. Looking ahead, it’ll be interesting to see the reactions to the news and whether people view this as an innocent rider being punished whilst others get lighter treatment. Certainly the case of track cyclist Baugé leaves me asking many questions.

Summary
It’s tragic that three admin errors mean a rider entering the prime of their career is suspended for a year, more so when the team involved has gone to great lengths to support clean cycling. Worse, they get the dopage treatment in the media, tarred with negative news even though there’s no positive test.

But this is the duty of a pro and the team. As well as training and racing, there’s watching the diet and even keeping your bike clean. And there’s an obligation to log on to ADAMS. Offredo’s case seems a sad one but it’s exactly what the rules specify. And unlike other cases, this time the rules seem to be applied to their letter.