Tax. The mere word can put some into furious debate and yet send others into quiet slumber. Either way taxes are inevitable, even in sport.

Tax matters in pro cycling. If you’ve ever wondered why French teams don’t buy in some of the best riders from outside France to showcase a sponsor in the Tour, tax is a big factor here. Allow me to explain.

The Joy of Tax

France is a country of high taxes but like many subjects, the detail is more nuanced. First, you get a lot back for your money, a decent health care system and excellent schools, not to mention fine roads and a largely civilised environment to live in. Second, the taxes tend to fall on the uber-rich and businesses and less on a typical family. Instead, it’s the employer who pays the tax, a lot of charges are added onto the payroll.

As beginner economists learn, making something more expensive encourages people to buy less of it, so it might seem odd that a land of high unemployment taxes jobs so much but c’est la vie and debate over who and what to tax at which rate isn’t for this corner of the internet.

Footloose and tax-free
Cyclists are like many sportsmen in that they can move around the world. There’s no office or factory to commute to. Many chose where to live for reasons of weather, connection to a decent airport to travel to races and the wealthier pick tax rates too: Monaco ticks the boxes on all three of these factors. For a star rider this footloose aspect means that their agent will say to teams “regardless of your tax position, we want €X million per year” (and then it’s up to the rider to pay any taxes on their income).

But if riders can move around, each team has to comply with national laws. And it’s here where the hefty French payroll taxes bite. Here’s some data from the French Senate on the taxes paid in France when a soccer club looks at hiring a top player:

Let’s walk through the table. We start with a rider and his agent saying “pay me €1.8 million a year“, a salary you might expect for, say, Tom Boonen, Fabian Cancellara or Denis Menchov. In lines 2 and 3, the rider or player has income and payroll taxes to settle themselves but already these are significantly greater in France, the gross salary for an athlete in France needs to receive is €4 million compared to €3-3.4 million for neighbouring countries. Our exemplar rider might move to Monaco, where no income tax is liable. The move will save them well over a million Euros a year.

But then come the payroll taxes, the social security charges. In France these are massively higher, see line 5. On the gross salary of €4m, another €1.4m in charges are added, meaning a French team needs to budget €5.4m just to ensure a rider gets his €1.8m, whereas a British-registered team only needs to spend €3.3m to give the same rider the same standard of living.

All in all it means a French cycling team needs a wage budget almost 50% bigger than a British team just to employ the same riders. As you can imagine, this is a real handicap. Put simply, French sports teams can’t compete on the same terms as rivals from other countries.

Above all, it’s not something applicable to millionaires, the tax rates are similar to employing guys on €60,000 a year. 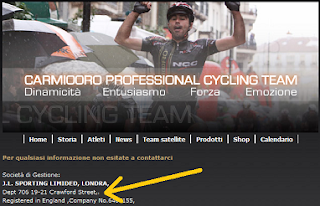 One effect of this is that some sports teams shop around for lower tax countries. Barloworld rode the Tour de France with a South African sponsor and Italian management but it was actually registered as a British team. Similarly the Carmiooro cycling team today maybe 99% Italian but it too is registered in Britain.

Does tax matter?
Yes. Tax plays a part in many aspects of life and business. Studies have shown how even small changes in tax allowances can alter birth rates; big differences in headline rates certainly have bigger influences. Tax is a factor behind the inability of French teams across all sports to land the biggest names, for example it thwarts some big transfers in soccer.

Nevertheless, cycling is still a sport and thankfully there are greater factors to success that the tax rate applied to a team. But note that a French cycling team manager is hampered by this burden before a rider even lines up, it is a contributing factor to the relative weakness of French squads. People have talked about a two-speed cycling in relation to doping, relatively clean French squads up against some foreign squads with a less ethical stance. But given the tax differences we also have un cyclisme à taux variable.

Previous post: Jonker didn’t see anything because he wasn’t there