The season has started officially with the Tour Down under in South Australia and right now many big names are doing the Tour de San Luis in Argentina. But today marks the return of road racing in the Northern Hemisphere with the Grand Prix d’Ouverture – La Marseillaise.

Ouverture means “opening” and this race starts the French and European calendar. Whilst held in the south of France, it heads inland from Marseille and snow is not uncommon. Today’s forecast says top temperatures of 8°C (46°F). Gone are the images of riders cradling kangaroos and posting pictures online of their SRM powermeters with the temperature display, this time it’s armwarmers and kneewarmers. Instead of tanlines, it’s mudlines.

The start and finish are in Marseille, France’s third largest city. A loud city, with a touch more hustle than bustle. A series of climbs makes up the route, in general the race is either going up or down. The biggest climb is the Pas de la Couelle, known the Petit Galibier with sections at 7% but the decisive point is usually the Col de l’Espigoulier. 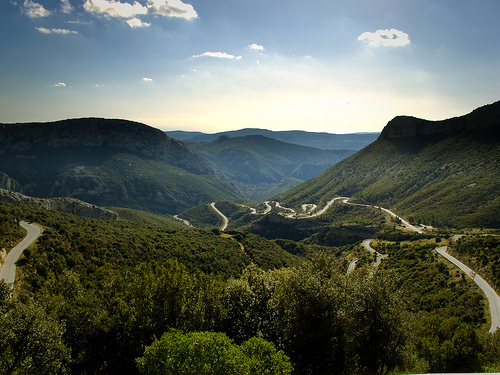 None of these climbs are tough, they are usually done in the big ring and are a useful test of early season form. A sprinter in good shape can get over them with the leaders. Indeed the race has been won by sprinters in the past but the course can make it hard to organise a chase. The countyside was made famous by Marcel Pagnol and works like Marius and Manon des Sources (made into a successful film t00).

The finish is flat and outside the Stade Vélodrome. Once a cycling track, today the stadium is the home of Olympique Marseille, one of France’s top soccer clubs.

BigMat headache: officials have told the BigMat-Auber 93 team to race in neutral kit as their sponsor is indistinguishable from FDJ’s BigMat. BigMat is a building materials retailer – part franchise, part co-op – with outlets in France but also in other European countries. Technically FDJ is sponsored by the European side of the building materials company whilst Auber 93 get their money from the French business but the kit features the same logo and this isn’t allowed.

Superstition: it’s said this is a race you don’t want to win and even that the winner is cursed for the rest of the season. The more rational explanation is that peaking to win this race means you’re cooked by the time bigger races come; the race is open and a victory in this event can go to almost anyone taking part so don’t assume the winner is set to dominate the French calendar; and besides some very good riders have won this race and gone on to have great seasons. Anyone starting today wants to win.

Favourites: it’s hard to pick a single rider because most have yet to start racing and because the race is so open. The full list of riders is listed at cyclesud.fr and the only Pro Tour squads are FDJ-BigMat and Ag2r La Mondiale plus Vacansoleil.

But Romain Feillu is always good for the early season, the sprinter can get over the climbs. Local riders include Rémi Pauriol (FDJ), Rémy di Grégorio (Cofidis) and Julien El Fares (Team Type 1). Rider number 1 is FDJ’s Kenny Elissonde, a neo-pro who wears the number in the place of last year’s winner Jérémy Roy who is not racing.

Weather: a cool 8°C (46°F) with rain showers expected but luckily the infamous Mistral wind is not present.

Coupe de France: this is the opening round of the French trophy series and the aim for riders and teams alike is two-fold: to win… and to make sure a rival team does not. Points are awarded to French nationals and riders on French teams.

Summary: This is the opening European road race and after the set piece opening of the season in Australia, glamour and sunshine are ditched for some more modest races until the classics arrive. Armwarmers, caps and thermal clothing are needed. A modest race – it doesn’t have its own website – events like this form the backbone of the pro cycling calendar.