Sport and transport are very different things. Think of cycling in France and maybe you ideas of the Tour de France or thoughts of a trip to the Alps. But for most people it’s a journey to work or a trip to the shops.

So time for a quick glance at regular cycling in France. And I’ll touch how this affects racing too.

But for most French citizens, cycling is not a sport but a means of transport.The French government has just presented its “cycling plan” and I learned that on average a French citizen rides 87km a year, compared to 800-1,000km for the Netherlands and Denmark, probably the most cycle-friendly places in the world, transport wise. Just 4.7% of the population uses a bike on a regular basis.

The major proposal of those drafting the plan is a tax rebate for cycling – a very French solution, you get tax rebates for everything in France, like a new boiler – but the ministère des transports has said “non“. Of the measures to get support, we’ll see support for improved bike parking facilities and storage at railway stations and workplaces and new-build apartment flats will have to have bike storage as part of the spec, no surprises there. 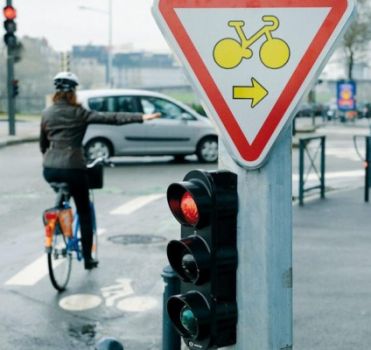 More practical for commuter, shopper and training athlete alike, cyclists should be allowed to turn right on a red light, to filter into the lane if it is safe. This has been trialled so far and it’s proving a success.

The most visible aspect of cycling as transport in France is the Vélib scheme in Paris, a bike rental programme where you’ll find racks of bikes all over the capital. Quick, cheap and easy, it’s a great way to get around. In fact the scheme isn’t Parisian, it was copied from France’s second city Lyon but much improved; and the Lyon scheme was itself a copy of other schemes around the world. Parisian traffic can daunt some but it’s relatively safe, for example there were no deaths in 2011. You can’t make a direct comparison but at least 16 Londoners died cycling last year.

What about sport?
The sport itself is growing. After years of gradual decline the main federation the Fédération Française De Cyclisme is growing its membership once more, although largely thanks to off-road membership. But the inexorable rise in road traffic means there’s very little cycle sport in and around Paris. Now this is normal for any large town I suppose but many traditional races have fallen off the calendar and Parisian cyclos have to travel further to get to a race at the weekend. There is also some grumbling over big races and the road closures they impose, people seem to accept the Tour de France but even races like Paris-Nice can get bad headlines and angry correspondence about closed roads.

The good news for the recreational cyclist and athlete alike is that France has a vast network of roads. Main arteries channel the bulk of the traffic and you are free to explore the rest. The quality of the road surface varies but this is more about whether the surface is granular or smooth as significant holes and cracks are rare.  Normally motorists are considerate to cyclists. There’s also a network of cycling paths allowing tourists to criss-cross the nation often away from traffic.

Summary
It might be the land of the Tour de France but high profile sport hasn’t inspired millions of French citizen to use their bikes for transport. New government plans have some good intentions but overcrowded commuter trains and bursting buses also get people cycling. But once away from crowded urban areas cycling is normally a pleasure.