Rasmussen and the rules (is he free to ride?)

My first thought is that Alex Rasmussen looks like a lazy idiot, he could throw away a career and a decent contract with a top team simply because he didn’t think about updating his Whereabouts. It’s annoying but it is the duty of a pro .

But as ever, there are rules and after taking a look at them, my thoughts are a bit more confused. You see, there’s a chance that Rasmussen is free to ride.

Let’s start at the beginning. Many riders form part of the UCI’s Registered Testing Pool. Here are the Danes on the list for 2011: 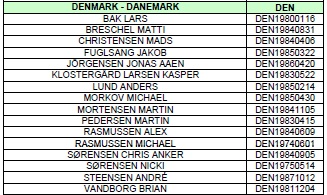 Note Alex Rasmussen on the list. The pool contains most of the top riders and all riders with a Bio Passport are included, plus other criteria for inclusion include rankings, results and past disciplinary hearings. Normally these riders are tested more frequently than others and above all they must take part in the UCI’s Whereabouts scheme. This means that four times a year a rider must say where they will be for the upcoming three months so that anti-doping officers can track them down for out-of-competition tests. Now it’s tricky to know where you’ll be for three months given races around the world, but luckily it can be updated by email or even SMS. Anyway, the point to note is that Rasmussen is part of the UCI’s Registered Testing Pool, remember that.

Next, it’s time to look at the UCI’s anti-doping rules:

The bold text is mine. It says that because Rasmussen is in the UCI’s pool then it’s up to the UCI to bring proceedings. Only the media are reporting that it is the Danmarks Cykle Union that is going to prosecute Rasmussen and not the UCI. This appears to fall outside of the rules.

More interesting is the timing. Interviews say Rasmussen had his third and final warning in April. This means today’s news of the potential anti-doping violation is actually more than four months old. There is a timetable involved where the anti-doping authorities, in this case the UCI, have to let the rider know of the offence within 14 days of the missed test and then the rider has 14 days to respond. In all 28 days. If the rider does not contest then within a month the UCI must record an alleged missed test against the athlete and shall notify the athlete and WADA. So the UCI should have informed WADA soon after the 28 period expired, presumably in May.

Now we return to the UCI rules:

111. Where the UCI is the responsible Anti-Doping Organization and does not bring proceedings against a Rider under article 21.4 within 30 (thirty) days of WADA receiving notice of that Rider’s third alleged Whereabouts Failure in any 18-month period, then it shall be deemed that the UCI has decided that no anti-doping rule violation was committed, for purposes of triggering the appeal rights set out at article 329.

In other words if the UCI did not bring proceedings against Rasmussen after notifying WADA then there’s no anti-doping violation. Rasmussen would be free to ride.

Now it all hinges on the timing of when the UCI informed WADA. Given the 28 day window of appeal for the UCI and Rasmussen closed in May, it was from this moment onwards that the UCI needed to tell WADA. Did the UCI not inform WADA promptly?

Summary
Reading blocks of text quoting the rules aren’t fun. If Rasmussen missed a test in April, the simple question is what’s been happening behind the scenes during the last four and half months?

It seems the UCI’s own rules state it’s up to the UCI to bring action against Rasmussen and that they should have notified WADA of the third and final Whereabouts error from April. So I’m confused when I hear the Danish authorities are to prosecute Rasmussen. More so when it seems nothing happened over the summer.

Either the UCI did notify WADA, in which case the 30 day window to prosecute has lapsed and he’s free to ride; or the UCI knew of the error but has only recently informed WADA, yet all the time Rasmussen was allowed to race and even win when arguably he should have been suspended.

But all this seems too far-fetched. We have three Whereabouts errors and usually that’s game over and goodnight. Only the UCI’s own rules do say otherwise, that if they don’t get on the case within 30 days then there’s no anti-doping violation. This doesn’t save Rasmussen from apparently not informing his team about missed tests but it could make a difference when we’re talking about a two year ban.

If you’re confused, so am I. My worry is that the governing body might be as well.

UPDATE: Alex Rasmussen was cleared on 17 November and on the exact basis set out above. Whilst he missed three out of competition tests, the Danish authorities ruled that UCI did not follow the correct procedures and consequently any missed tests were not considered anti-doping violations. Rasmussen is now free to resume his career and should ride with Garmin-Cervélo in 2012.