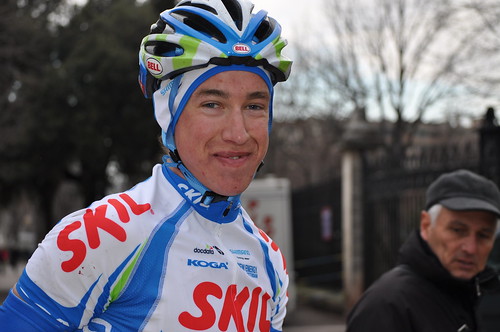 It’s been a good start to the season for the French. Thomas Voeckler stands out but there have been plenty of wins from others, from Samuel Dumoulin and Jérémy Roy as well as strong performances from Yoann Offredo. Another name to add to the mix is Skil-Shimano’s Alexandre Geniez.

The 22 year old rider has just finished fourth overall in the Critérium International, built on fifth place in the “mountain” stage finishing on the Col de l’Ospedale and secured with a 20th place in the time trial. He left several big names trailing and even lamented that more people didn’t attack on the final climb. It’s not a freak result, he was 12th on Mont Faron in the Tour Méditerranéen and then seventh in the Vuelta a la Region de Murcia, behind a sizzling Contador.

Bio
He’s from Flavin, a village near the sleepy town of Rodez in southwest France. He started riding with a local club aged 14 but was mainly interested in mountain biking. He spent the summer of 2006 working in his local town hall to collect money to buy his first bike, a second hand Pinarello Prince. From there he rose up the ranks quite quickly, combing studies and an apprenticeship with aeronautical giant Airbus with sport. He was sometimes training at night thanks to lights on his bike.

By 2008 he was an elite rider with a big amateur team in Toulouse and come 2009 he joined French amateur squad VC La Pomme – an outfit that deserves a mention on this blog someday soon – where he won the presigous Ronde de l’Isard stage race in the Pyrenees. Geniez also studied, obtaining a university diploma in Sports Management.

Pro
He turned pro in 2009. FDJ were after him but wouldn’t offer him a contract to turn pro straight away. Cofidis too were on to him. But Skil-Shimano offered him a good deal with a three year contract and he jumped at the chance, even if it meant riding in a foreign team, the deciding factor being that they would pay for him to finish his studies. It looks like Skil got a bargain.

His first year was solid, a few top-10 rides, including seventh overall in the Tour of Luxembourg amongst some heavy hitters, and best young rider too. There was a podium spot in the Route du Sud, almost on his home roads. But he said he wasn’t too happy with the year, finding his form too inconsistent.

A quiet rider who prefers hilly terrain and confesses to hating flat and windy races, he comes across a lot like David Moncoutié, even sharing a similar path as an amateur to the Frenchman. Don’t be surprised if someone labels him as “the new Moncoutié” although Geniez appears more ambitious, a man with plan compared to the sometimes infuriatingly carefree Moncoutié.

This time it’s different (is it?)
He’s categorised as a climber but his build and TT results suggest there’s more under the bonnet. Another French ride to watch, the years go by and many exciting talents never step up. It’s one thing to make the top-10 by surprise, the hard part is to deliver results when others are expecting. Just ask Jérôme Coppel who was stuck with a stomach bug in the Critérium International.

But I can’t help feel there are more and more talented French riders. They have to assume some pressure but the weight of a nation can be carried more easily when you have several riders instead of one or two. The ability to ride uphill as fast as he did on Corsica doesn’t come by chance, this was no tactical fluke either. Add him to the watchlist and don’t be surprised if he’s up there in the hilly races this season.

He’s also got a good website at http://alexandre.geniez.free.fr (in French). It’s got plenty of simple info and photos, all clearly set out and it’s kept up to date as well.