There are some foods that are particularly European. Maybe people think of fine wine, truffles, baguettes and ravioli. But for cyclists there are some particular foods that stand out. As part of a series about food in Europe for riding, here’s the first: Nutella.

Product description
Nutella is a sweet spread. It’s made from hazelnuts, palm oil, sugar, milk, flavourings and other ingredients.

Euro Cyclist Use
Morning breakfast on bread and post-ride recovery by the spoonful. Those worried about their power/weight ratio should abstain.

History
Several factors across centuries combined to bring you Nutella. First the Piemonte region of Italy is a prolific producer of hazelnuts, they have long been part of the local diet and ever since the arrival of cheap sugar from the Caribbean the nuts have been combined with sugar to make a paste. By the mid-19th century Piedmont’s regional capital Turin was renowned for its gianduja, or sweet hazelnut paste. Second, tax played its part: a levy on cocoa beans saw those with a sweet tooth hunting for substitutes, further encouraging the substitution of chocolate by gianduja.

Next, it was the post-war period when Nutella took off. The arrival of consumer brands, largely a 20th century phenomenon, allowed a small baker, Pietro Ferrero, to start a company and sell his products across Italy. He began with a modest 300kg of paste from his bakery and within five years he had a fleet of 200 trucks delivering Nutella over Italy. Soon only the Italian army had more vehicles than Ferrero.

Today Ferrero doesn’t just make Nutella, it produces Tic Tacs, Kinder and more. It has greater revenues than Hershey and has only fallen behind US food giant Kraft after the American company acquired its British rival, Cadbury. Another cycling connection is the long-standing sponsorship of the Giro d’Italia although this has faded away in recent years.

Willy Wonka
Today Ferrero is a huge company, but perhaps with a human heart. It is still headquartered in Alba in the Piedmont region of Italy where the hazelnuts come from. It’s also 100% owned by the Ferrero family.

The Ferrero family remain reasonably secretive, indeed they cultivate an image of mystery. If you have read the children’s tale of Charlie and the Chocolate Factory, or seen the films, then you probably remember the wild character that is Willy Wonka. Owner of a confectionery factory, Wonka isn’t your average CEO. 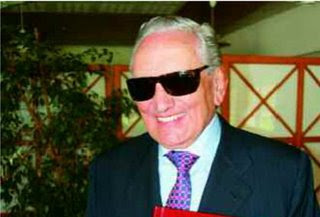 Michele Ferrero might be more level-headed than Wonka but his passion is chocolate. He spent five years in a kitchen learning to perfect chocolate waffles and he located part of Ferrero’s R&D to the Belgian Ardennes just because “it is quieter“. To this day the family spends hours in the kitchen designing new products and if modern day “food science” has its role, so does experimentation. Now his sons Pietro and Giovanni run the business. Pietro, the Chairman and co-CEO is a keen cyclist, you might find him on the roads of Piemonte at the weekends.

Previous post: Transfer Games: what next for Riis and Astana?